Radical activists plan to vent their anger at the Supreme Court decision overturning Roe v. Wade by gathering at the homes of justices for an escalating intimidation campaign.

“The pro-abortion group, Ruth Sent Us, started circulating the justices’ addresses in the hours after the high court struck down the landmark abortion case Friday and as violent protests broke out nationwide,” the New York Post reported. “Dozens of protesters showed up outside Justice Clarence Thomas’ home overnight, chanting ‘no privacy for us, no peace for you!’ and accusing his wife, Ginni, of being an ‘insurrectionist’.”

The protesters also had signs reading “Thomas is a treasonous turd” and “Off with their d—s.” The video was captured by Washington Examiner reporter Jeremiah Poff. Watch:

Poff also reported that one sign announced “we are proud Antifa Scum.” 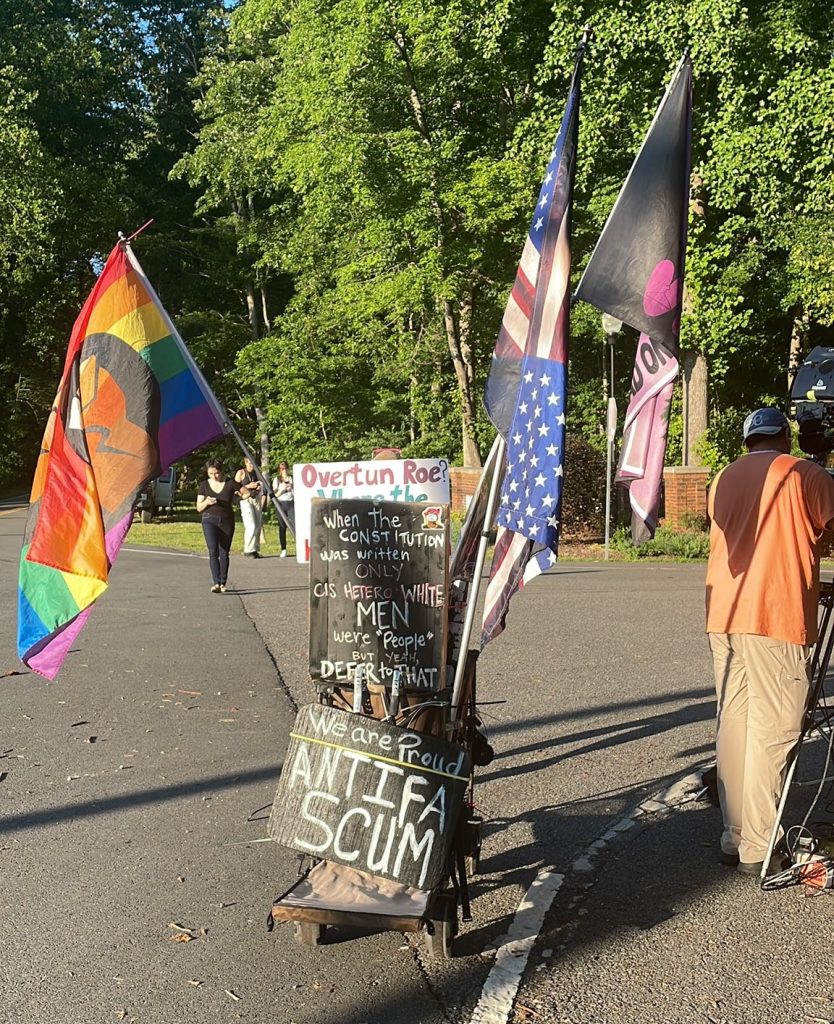 ‘Ruth Sent Us’ have been protesting outside of justices’ homes ever since the draft version of the opinion was leaked.

We aren't incubators! Youth procession delivered baby dolls to Amy Coney Barrett. We aren’t protesting to change the minds of women-hating fascists.We're calling on the pro-choice majority, on YOU, to get in the streets to STOP #SCOTUS from overturning Roehttps://t.co/Y0oCPlHcsr pic.twitter.com/nkHT7iamHO

And of course, in early June, a fully armed man was arrested for attempting to assassinate Brett Kavanaugh at the U.S. Supreme Court Justice’s home in Maryland.

Nicholas John Roske, 26, faces one count of attempting to murder an associate justice of the supreme court, and is facing a possible life sentence after a federal grand jury indicted him earlier this month.

President Biden recently signed a measure that should increase security at the Supreme Court Justices’ homes.

As reported earlier, radical protesters gathered at the Supreme Court on Friday and handed out the address of Supreme Court Justice Clarence Thomas.

Luke Mosiman of the Maricopa County Young Republicans posted the video confronting the protesters in front of the Supreme Court who were organizing the alleged threat against the justice.

“Why are you assaulting a justice and going to their house?” Mosiman said. “Don’t you feel like… that side goes against the Republic and the system. Why would you do such a thing? I would never do that if I disagreed with the case.”

“All I can say is that, you know, we go out there, the police are out there, if it was an issue, they would probably arrest us, so,” a protester with a sign said.

“Well, I understand that,” the protester said. “And we’ve had people come and ask the police to arrest us. And so far they haven’t, so…”

“Well, I hope you get arrested tonight. What else can I say?” he added.

Becker News reached out to Mosiman, who attested that the protesters were sharing the home address of Supreme Court Justice Clarence Thomas, although he states that the protesters would not give him a copy of the literature. Thomas wrote the majority opinion in Dobbs v. Jackson that overturned Roe v. Wade.

“I am disgusted and ashamed that a fellow American would try to disrupt our rule of law by gathering outside of a supreme court justice’s home to threaten and intimidate [him],” Mosiman told Becker News.

It appears that the radicals’ intimidation campaign is only getting started. However, the Supreme Court is poised to hand down a decision that could negatively affect the authority of the EPA to regulate the ‘climate.’

Since that ruling could be handed down as soon as Monday, it appears that the conservative Supreme Court is also just getting started.