Thirteen Republicans joined in with the radicalized Democratic Party to pass a trillion dollar ‘socialism bill’ – even as radical Dems like Rep. Alexandria Ocasio-Cortez (D-NY) defected over a $1.9 trillion ‘social safety net’ bill not being brought to the floor first.

“The funding package, which passed 228 to 206 and relied on Republican votes to get across the finish line, will ramp up government spending on roads, bridges and airports, as well as funding for public transit, water and broadband,” NBC News reported.

“Six Democrats voted against the measure and 13 Republicans voted in favor,” the report noted. “The Democratic opposition was progressive members who were unhappy that the bill was being voted on before passage of a $1.75 trillion social safety net spending bill.”

The 13 Republicans – the usual ‘squishes’ like Rep. Adam Kinzinger (R-IL) – are listed below: 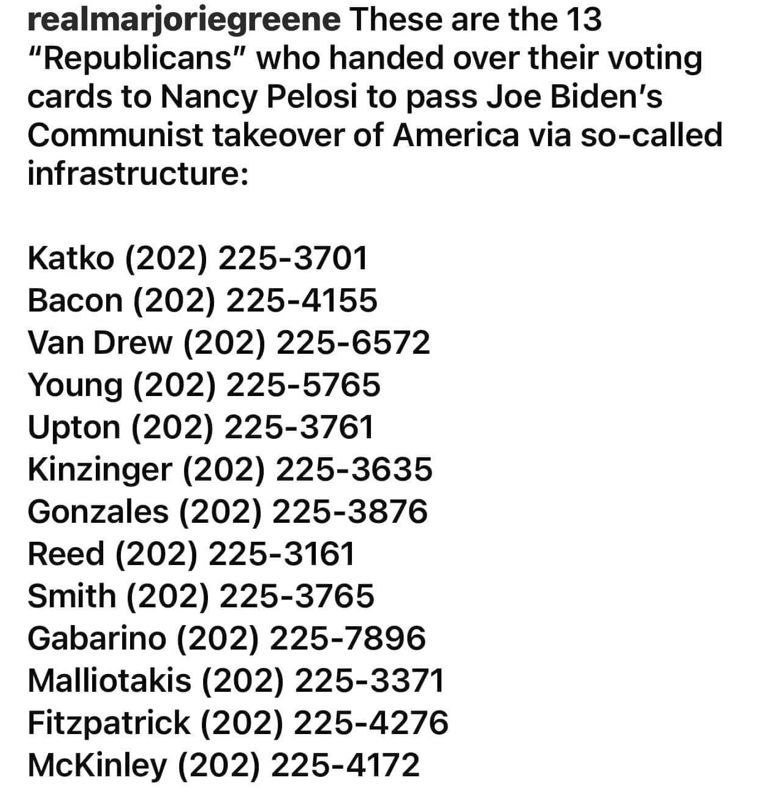 Attorney Harmeet Dhillion put the reason behind their defection in a nutshell:

I don't give up my nights, weekends, billable hours, and most importantly time with my family as a Republican volunteer decade after decade, for these jerks to bring home pork to their districts. We need better Republicans representing us in Congress. And we have for a long time. https://t.co/dCE0eAo959

“I don’t give up my nights, weekends, billable hours, and most importantly time with my family as a Republican volunteer decade after decade, for these jerks to bring home pork to their districts,’ Dhillon said. “We need better Republicans representing us in Congress. And we have for a long time.”

Six of the Congressmen who voted with the Democrats were from left-wing New York or New Jersey. Rep. Jeff Van Drew had famously crossed over from the Democratic Party to the Republican Party in 2020 to avoid being primaried. Rep. Adam Kinzinger’s district in Illinois is being eliminated and he is not seeking re-election (although he recently made the quixotic statement that he is weighing a run for president in 2024).

Here are the 6 radical Democrats who defected on their votes, including a number of “Squad” members:

CNN provides a bit of the budget standoff background, which is now resolved thanks to the aid of the 13 Republican Congressmen who gave in to the majority of Democrats.

“The legislation passed the Senate in August, but was stalled in the House as Democrats tried to negotiate a deal on a separate $1.9 trillion economic package, another key component of Biden’s agenda that many Democrats had tied to the fate of the infrastructure bill,” CNN reported.

“The legislation will deliver $550 billion of new federal investments in America’s infrastructure over five years, including money for roads, bridges, mass transit, rail, airports, ports and waterways,” the report adds. “The package includes a $65 billion investment in improving the nation’s broadband infrastructure, and invests tens of billions of dollars in improving the electric grid and water systems. Another $7.5 billion would go to building a nationwide network of plug-in electric vehicle chargers, according to the bill text.”

Setting aside the forthcoming boondoggle of the Build Back Better plan, the “infstructure” bill contains numerous examples of mind-boggling waste as detailed by the Foundation for Economic Education (FEE):

Big corporate news media, meanwhile, is arguing that the Build Back Better is necessary for job creation (while never noting how much such coerced re-allocation of taxpayer funds destroys productive jobs in the long-term). However, it is also touting the ‘recovery’ of the economy as misleadingly portrayed by the recent October jobs report – which showed a payroll increase by 531,000 jobs on the month, according to the Labor Department.

The New York Times is headlining this development as a “brighter picture” for the U.S. economy, while burying the bigger picture. While the October numbers represent a significant increase, they come within the context of a pandemic response-battered economy that has led to labor force participation remaining heavily underwater. The federal government is still subsidizing millions of Americans to remain at home instead of working, which is a point that is acknowledged deeper in the NY Times report. (Note: Labor Force Participation rate below is shown from FRED-St. Louis and not the more limited NY Times graphic, which only shows the prime-age LFP going back to 2019.)

“The stubbornly low participation rate underscores the pandemic’s economic damage and why it will take time to recover despite strong months like October. Total employment is 4.2 million below — and the unemployment rate remains more than a full percentage point above — where it was in February 2020,” the Times noted.

Meanwhile, since there is such a low Labor Force Participation rate, the huge influx of cash between Federal Reserve policy on interest rates, as well as massive government spending, is fueling a spike in inflation.

A key measure of inflation hit a new 30-year high in August, the Bureau of Economic Analysis reported in October.

“The price index tracking consumer spending — the PCE price index — was up 4.3% over the 12 months ending in August,” CNN noted. “That was a faster pace than July’s 4.2%. Inflation continued to run at the fastest pace since January 1991.”

However, this PCE price index strips out food and energy prices – two necessary staples of American life that have seen their prices explode over the course of Biden’s presidency.

“Food prices hit a 10-year high worldwide, according to the Food and Agriculture Organization of the United Nations (FAO)’s food price index. U.S. companies are feeling the pinch, resorting to increasing prices to offset their costs to purchase goods and deal with labor and transportation problems,” the Center Square reported.

“Overall, FAO index prices have increased by 32.8% over the past 12 months, the highest they’ve been since 2011,” Center Square reported.

Meanwhile, energy prices are skyrocketing through the sunroof.

“Americans are feeling pain at the pump — and there’s little the White House can do to shield them from it,” CNN reported, dishonestly, about the most anti-energy presidency in U.S. history. “The highest oil and gasoline prices since 2014 are casting a shadow over the economic recovery from the Covid recession. Energy sticker shock threatens to intensify the nation’s biggest inflation scare in more than a dozen years.”

Senator Rick Scott (R-FL) ripped the infrastructure bill because it would only add to the inflationary pressure, which disproportionately harms the poorest Americans.

“If you look at what they’re talking about with this — name whatever the bill is — all it’s going to do is cause more inflation,” he said. “Look at what it’s doing to poor families in this country, with gas prices up 55%. Go to the grocery store, food prices are up. It’s all caused by government spending. And by the way, if you look at inflation, the border, parents’ involvement in schools, our military support, there is nothing that Democrats are talking about doing that solves a problem that Americans care about.”

Senator Scott then talked about his position on the bill, which he helpd up as an example of wasteful spending that would ultimately ‘bankrupt this country.”

“You put a bill in front of me that’s going to be roads, bridges, airports and seaports paid for, I’m very interested in doing something like that,” he said. “But I am not going to bankrupt this country. This country has almost $30 trillion worth of debt. That bill by itself was a quarter of a trillion dollars of debt. This has got to end. This is causing inflation. I mean, this is hurting the poorest families, this is not hurting the rich. It’s hurting families like mine growing up that had to struggle to put food on the table with this is ridiculous inflation. Solve that.

“We’ve got to live within our means, like every family does,” he added. “The amount of waste is staggering. Americans should be furious with the way money is spent in the Senate and in all Congress.”

The trillion-dollar infrastcuture was passed through the Senate in August with the help of Republicans, including Minority Leader Mitch McConnell (R-KY). The voted was touted as a slap-in-the-face to Donald Trump, who had blasted the bill.

He called out the RINOs (Republicans In Name Only) as “weak, foolish, and dumb” for supporting the bill.

“Don’t do it Republicans — patriots will never forget!” Trump warned. “If this deal happens, lots of primaries will be coming your way!”

Donald Trump’s warning also applies to the 13 Republicans who delivered President Joe Biden a desperately needed win on Friday (at least, those who aren’t going to be chasing delusional dreams of becoming president.)