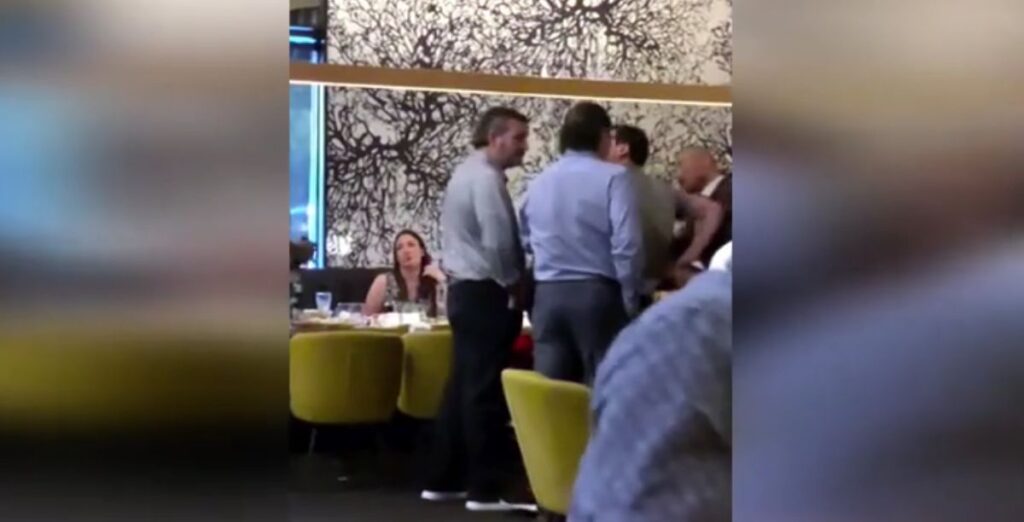 A screaming heckler confronted Senator Ted Cruz at a restaurant near the NRA convention in Houston, Texas being held just days after the Uvalde shooting massacre.

“Why did you come here to the convention?” the man asked. He was restrained as he tried to get in the Texas senator’s face. He was then dragged out of the restaurant while still screaming.

The original clip was posted on TikTok by a user named Hopey with the status: “So I was having dinner and got to see a show. Ted Cruz being accosted literally the whole time, lmao.”

Philip Lewis of the Huffington Post put the clip on Twitter, which garnered a lot of reaction — much of it approving of the man’s actions.

The Hill reported on Ted Cruz’s speech and chided him for ‘blaming everything but guns’ for the Uvalde mass shooting.

“Sen. Ted Cruz (R-Texas) blamed declining church attendance, violent video games, prescription drugs, social media bullying and other societal factors — but not guns — for the wave of mass shootings in the U.S. during an address to National Rifle Association (NRA) members on Friday,” the Hill noted.

“We know that many of these who seek to commit the most heinous crimes, they’re isolated from human contact,” Cruz said. “They’re living a virtual life in the absence of community of community and faith and love.”

Senator Cruz reiterated that the solution to stop mass shootings does not lie in more gun control.

Senator Ted Cruz is an ardent First Amendment supporter and believes in the right to bear arms. It is the Constitutional right of Americans to own guns and to defend themselves from criminals or a tyrannical government. Supporting the First Amendment has nothing to do with NRA lobbyists or being a member of a “well-organized militia.” If anything, the Uvalde mass shooting underscores that Americans cannot rely solely on police to defend them from criminals.

There were numerous security breakdowns that led to the Uvalde mass shooting: The school’s doors were unlocked. Police officers refused to intervene for nearly 80 minutes. They failed to follow the training they were given that said to stop the shooter as soon as possible.

Instead the police restrained anguished parents from going into the school themselves, and even watched as an armed Salvador Ramos entered Robb Elementary School.

The worst cities for murder rates tend to have strict gun control and/or are run by Democrats who are lenient towards criminals: St. Louis, Baltimore, Detroit, Chicago, New Orleans, Philadelphia, and Washington D.C. are perennially among the most deadly cities.

There are approximately 393 million guns in the United States. Nearly half of households have access to guns. Every year, approximately 992 teens and children die from gun homicides — comparable to childhood deaths from cancer, drownings, and motor vehicle crashes.

There are nearly 150 million law-abiding gun owners in America who have nothing to do with mass shootings every year. But for many people, it is easier to blame a gun-rights supporting politician for rare despicable acts of senseless violence than to understand the depraved evil acts of a lone gunman with the capacity to kill small children.

Ultimately, the causes of mass shootings have more to do with mental illness than with the existence of guns. But since the media’s first instinct is to exploit any crisis for political reasons, we’re not likely to hear them talk about actual solutions to prevent mass shootings, such as improving school security, hiring armed guards for schools, and funding and training police officers who are willing to put their lives on the line to protect the most defenseless among us.

There was Another Mass Shooting in America. You Didn’t Hear About It Because the Suspect is a Chinese Communist