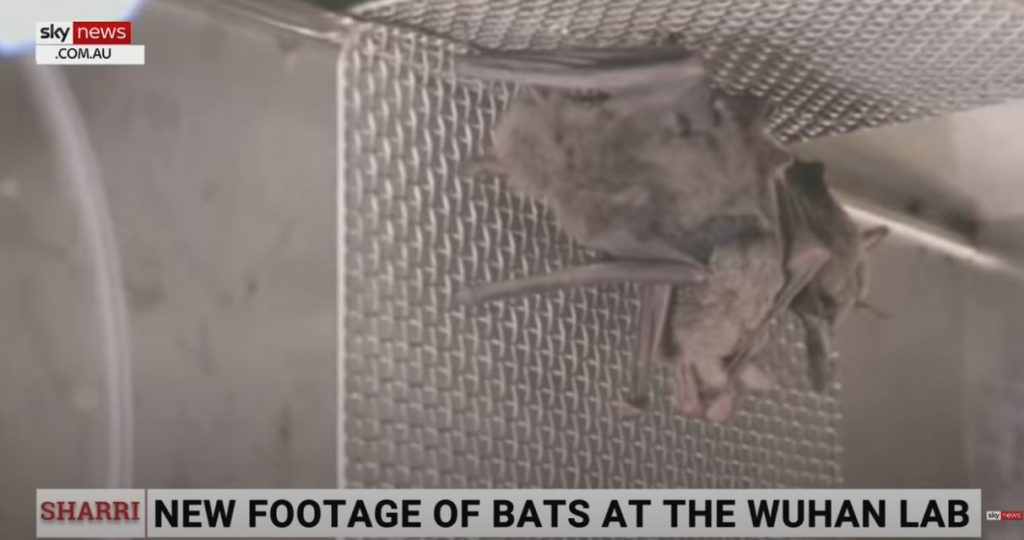 The Wuhan laboratory was conducting risky coronavirus research with live bats, according to newly uncovered video from the Chinese Academy of Sciences taken in 2017. The footage was aired on Sunday night on Australian channel Sky News.

A 144-page report called “Wuhan laboratories, bat research and biosafety” was published to Research Gate in April and contained the recovered footage.

“The collection shows bats inside a cage, while another shows a researcher feeding a bat a live worm,” Newsweek noted. “One still image shows a group of hazmat-clad researchers ‘capturing bats’ and another shows a bat hanging from a woman’s hat.”

“It shows that much of what we’ve been told about the origin of the pandemic from the very beginning was Chinese disinformation which was then propagated by many people who had been working in conjunction with the Wuhan Institute of Virology who are compromised, who had extreme conflicts of interest,” Sky News host Sharri Markson told Fox News‘ Tucker Carlson.

“The Wuhan Institute of Virology kept live bats in cages …. disproving denials from World Health Organization investigators who claimed the suggestion was a ‘conspiracy’.”

Peter Daszak of EcoHealth Alliance, which funneled millions from the Department of Defense, the Fauci-run NIAID, and other U.S. government organizations, earlier vehemently denied that Wuhan lab researchers were conducting experiments on bats.

World Health Organisation investigator Peter Daszak initially denied there were bats at the WIV in this now deleted tweet. In another tweet he called it a conspiracy theory. pic.twitter.com/E0J9bmxrbT

“Important error in this piece,” Daszak wrote on Twitter. “No BATS were ‘sent to Wuhan lab for genetic analyses of viruses collected in the field”… That’s not how this science works. We collect bat samples, send them to the lab. We RELEASE bats where we catch them!”

Daszak was involved in a WHO investigative team that effectively rule out the Wuhan lab leak theory. The WHO backed China’s version of events that the COVID-19 pandemic could not have originated in a Wuhan lab.

The results of the highly anticipated “fact-finding mission” to China appear to close the door on further official investigations. As the Associated Press reported in February:

A closely watched visit by World Health Organization experts to Wuhan — the Chinese city where the first coronavirus cases were discovered — did not dramatically change the current understanding of the early days of the pandemic, said Peter Ben Embarek, the leader of the WHO mission.

The press conference on the mission’s findings had the following to say about one of the most controversial contentions:

And it allowed the joint Chinese-WHO team to rule out one theory on the origins of the virus. The Wuhan Institute of Virology has collected many virus samples, leading to allegations that it may have been the source of the original outbreak, whether on purpose or accidentally.

But experts now consider the possibility of such a leak so improbable that it will not be suggested as an avenue of future study, said Embarek, a WHO food safety and animal diseases expert.

The AP rightly points out: “China had already strongly rejected that possibility and has promoted other theories. The Chinese and foreign experts considered several ideas for how the disease first ended up in humans, leading to a pandemic that has now killed more than 2.3 million people worldwide.”

The belief there is a strong possibility the COVID-19 virus escaped from the well-funded Wuhan Institute-of-Virology laboratory has recently been regaining traction. A number of scientists who signed onto Daszak’s language that the Wuhan lab leak was a “conspiracy theory” have since reversed their positions.

The Wall Street Journal appears to have cracked the case on Sunday by contacting researchers who believe the sequences could not have arisen from nature, all speculation that “bat soup” and “wet markets” were the originators aside.

The essay in WSJ said that “much of the public discussion has focused on circumstantial evidence: mysterious illnesses in late 2019; the lab’s work intentionally supercharging viruses to increase lethality (known as ‘gain of function’ research).”

“The Chinese Communist Party has been reluctant to release relevant information,” it adds. “Reports based on US intelligence have suggested the lab collaborated on projects with the Chinese military.”

“But the most compelling reason to favor the lab leak hypothesis is firmly based in science. In particular, consider the genetic fingerprint of CoV-2, the novel coronavirus responsible for the disease Covid-19,” the report added.

SARS-CoV-2’s genetic sequencing ‘almost certainly’ demonstrates that it is an artificially-manipulated virus developed in a laboratory, the scientists say.

“The CGG-CGG combination has never been found naturally. That means the common method of viruses picking up new skills, called recombination, cannot operate here,” they wrote in the WSJ.

There have been scattered reports that Chinese scientists have been attempting to put a SARS-CoV-2 strain back into bats that would later be ‘discovered’ in the wild. This would purportedly give the Chinese cover for what appears to many to have been a human-engineered, laboratory leaked coronavirus strain.