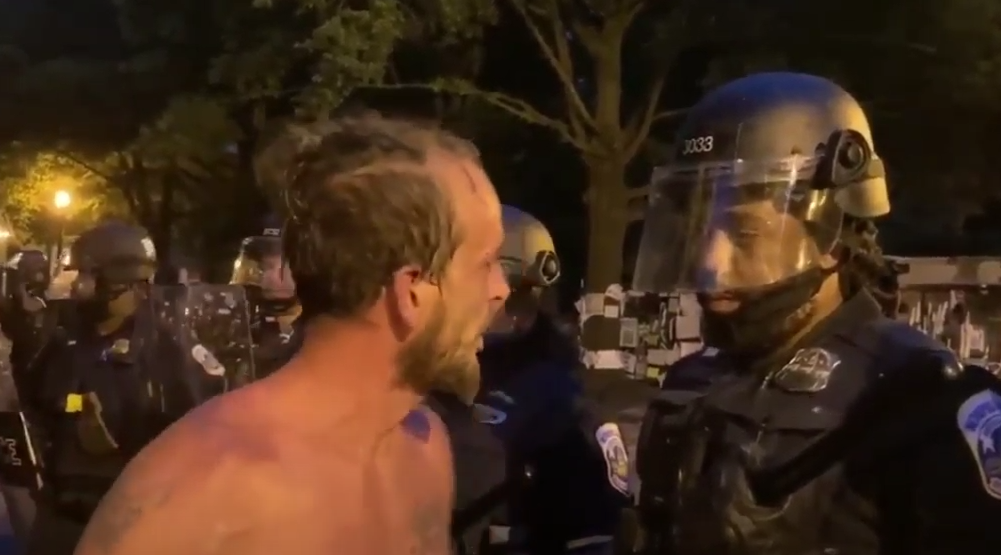 Kentucky is considering a bill that pushes back on the “Defund the Police” movement and make it a crime to “insult” a police officer during a riot.

“A bill moving through Kentucky’s Senate would make it a crime to insult or taunt a police officer during a riot. Supporters say the bill targets people who unlawfully ‘cross the line’ but opponents call it a blatant attempt to crush protests and a violation of First Amendment rights,” CBS noted.

The bill would make it a crime for rioters to make threatening or provocative speech to officers during a civil disturbance.

“Senate Bill 211 mandates up to three months’ imprisonment for a person who ‘accosts, insults, taunts, or challenges a law enforcement officer with offensive or derisive words,’ or makes ‘gestures or other physical contact that would have a direct tendency to provoke a violent response from the perspective of a reasonable and prudent person,” CBS continued in its reportage.

“A person convicted of this misdemeanor charge could also face a $250 fine and be disqualified from public assistance benefits for three months.”

The bill, which also pushes back against the “defund the police movement,” states one aim of the legislation is to “maintain and improve their respective financial support.”

On Thursday, the bill passed 7-3 through the Senate’s Veterans, Military Affairs and Public Protection committee, with only Republicans supporting it. Democrats opposed limiting speech that could potentially escalate tensions with police during a riot.

The lead sponsor of the legislation, state Senator David Carroll, a Republican and retired police officer, had a sharp reponse for CBS News when contacted for comment.

“After looking at you’re headline, I don’t think I have anything to say to you. I miss the time when we actually had unbiased journalists!!”

Of course, blue check pundits on Twitter are aghast the bill would do anything to protect officers from it being ‘open season’ on harassing them during a riot.

Kentucky is not the only state considering such legislation, Florida Governor Ron DeSantis is also backing an “anti riot” bill.

“The governor says the bill would help Florida curb unruly mobs,” the Sun Sentinel noted. “If passed as written, people deemed to be rioting would face stiff felony sentences. People who run them over or shoot them also could be shielded from lawsuits.”

Although the Sun Sentinel bemoans the legislation as a potential assault on free speech, the bill makes clear it is talking about violent and destructive behavior. This is not a “free speech” issue.

“The bill defines a riot as being part of a ‘public disturbance’ that involves three or more people engaging in ‘disorderly and violent’ behavior that results in injury or damage to people and property or create ‘clear and present danger’ to people and property,” the Sentinel reported. “People guilty of participating in a riot or ‘encouraging’ the riot would be charged with a third-degree felony. It also goes on to define ‘aggravated rioting’ as nine or more people who, in the midst of an ongoing riot, cause great harm to a person or property damage of more than $5,000.”

By framing left-wing rioting as a “free speech” issue, the media is tacitly defending Antifa and BLM’s ability to commit wanton acts of violence, vandalism, and property damage. On the other hand, any ‘right-wing’ protest to stand up for people’s rights nowadays is condemned as a potential act of ‘domestic terrorism.’  The disparity in media coverage and law enforcement’s treatment of the political right and the left are starting to follow the same track. It is not a coincidence.