AOC is in Therapy, the Reason Why is Making People Eye Roll 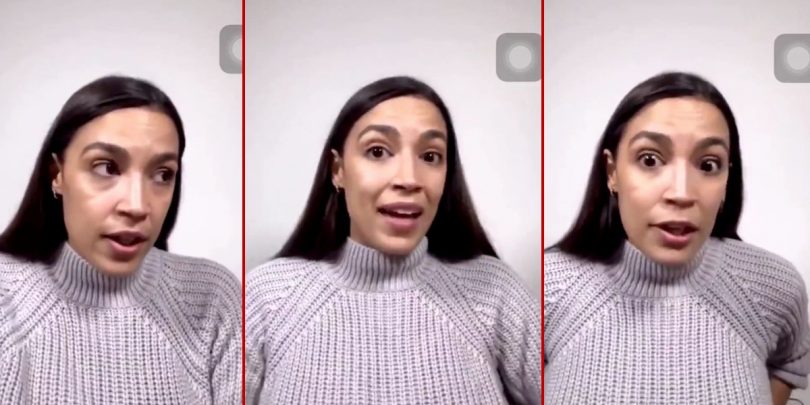 AOC is in “therapy.” But it is not for a reason the American people might expect.

But the New York Rep. recently admitted she was indeed in therapy and it wasn’t for any reason that one might hope for. It was for a patently political reason. AOC claims she needs therapy for the Capitol Riots fallout.

Now, it isn’t just that such an announcement smacks of a dishonest weaponization of psychotherapy for political ends. It is also a way to scapegoat the Republicans and Trump supporters to drag back an issue the Democrats believe can pay off in the mid-term elections.

The Democrats have spread numerous falsehoods about the January 6th event, such as lying about there being “capture and kill” teams and that it was a “deadly” siege, despite the fact that the only person who died in the riot itself was a Trump shooter who was shot and killed by an unidentified Capitol Police officer.

But Ocasio-Cortez has been one of the chief propagandists spreading falsehoods about the event. She has even smeared the Capitol Police officer who came to her aid as she reportedly hid out in an office adjacent to the event.

Again, it is proven that Capitol Police let protesters into the building, while National Guard who were told to maintain a low profile simply watched without intervening. Many of the protesters would either scuffle throughout the building, while a handful engaged in acts of vandalism and theft. None of them were proven to be “armed,” in the conventional sense of carrying firearms. This was not the violent insurrection the left has made it out to be.

It is also not tantamount to an act of “war.” Yet that is precisely what AOC has made it out to be in her unnecessary pronouncement that she is now in “therapy” over the incident.

Ocasio-Cortez said that lawmakers who did their jobs on January 6th “effectively served in war.”

“After the 6th, I took some time and it was really Ayanna Pressley when I explained to her what happened to me, like the day of, because I ran to her office and she was like, ‘you need to recognize trauma,’” Ocasio-Cortez said in a radio interview with Latin USA on Friday.

“And I feel like I learned this the hard way after my father had passed away when I was a teenager … That happened at a young age and I locked it away. You have to live with it for years,” she continued.

“Oh yeah, I’m doing therapy but also I’ve just slowed down,” she said. “I think the Trump administration had a lot of us, especially Latino communities, in a very reactive mode.”

Ocasio-Cortez related how Mike Pence being evacuated convinced her that “these terrorists, insurrectionists got into the Senate chamber.”

About that. Here is newly uncovered footage from January 6th showing Capitol Police letting protesters into the Senate chamber with a reassuring instruction to protest “peacefully.”

“Show us no attacking, no assault, remain calm,” the uniformed officer said.

“This must be peaceful,” the protesters who later entered the Senate chamber announced. As extensive video from inside the Capitol building showed, it largely was.

Rep. Ocasio-Cortez then made a political statement indicating that she blamed those who objected to the Electoral College slates for the incident, even as Democrats did the same in 2001, 2005 and 2017. She praised Pence for working to put an end to the objections.

“Pence was the one person, arguably, that had one of the most important roles in making sure that procedurally the Electoral College counts went on as proceeded,” she said.

“Sixty seconds could have meant potentially the difference between what we have right now and a martial state,” she continued. “This was an all-out attempted coup.”

This is a ludicrous statement, but one that is rarely fact-checked in the media. It is impossible that unarmed protesters could have ‘overturned the results of an election’ by merely ransacking the Capitol building. It is a lazy, intellectually dishonest trope. But it is one that Democrats believe will work since the great majority of the U.S. media will simply parrot whatever radical Democratic lawmakers tell them to.

“If 60 seconds went differently, if a different door was opened, if a chair wasn’t barricaded in a certain way, we could have a completely different reality right now,” she added. “We don’t want to acknowledge that that’s how close we got, but that is how close we got.”

This is a dishonest narrative, but unfortunately, there is no known cure for pathological lying or narcissistic personality disorder. After the January 6th incident on Capitol Hill, she took to social media, as expected, to regale the public about her personal travails.

AOC recounting her horrifying experience hiding in her office during the insurrection.

“I thought I was going to die…I have never been quieter in my entire life.” pic.twitter.com/t2P6FU3mFU

“Hide, hide, run and hide,” she recounts one of the staffers allegedly telling her.

They allegedly hid in a bathroom for about six hours in Katie Porter’s office.

SIX HOURS. That’s how long @AOC, @katieporteroc and their staffers hid out in Porter’s office, in the darkness and the silence, not knowing whether they would make it out alive. SIX HOURS of feeling like your life is on the line in your own place of work. Just awful. https://t.co/ljIc5oR3sq

“I hope I get to be a mom,” Porter claims Ocasio-Cortez said. “I hope I don’t die today.”

According to a New York Times timeline, the first breach was about 2 p.m. and the Sergeant-at-Arms declared the Capitol building secure around 5:16 p.m. This is considerably less than six hours.

“Where is she? Where is she?” someone yelled, as Ocasio-Cortez recounts about the experience. “And this was the moment where I thought everything was over.”

After hearing loud banging on her office door, Ocasio-Cortez said she hid in her bathroom, believing the office was about to be breached.

“I thought I was going to die…I have never been quieter in my entire life,” she added.

The person who had come to find her was… a Capitol police officer. Sent to rescue her.

Rep. Ocasio-Cortez not only showed a lack of gratitude for the officer, she demonized the officer.

Rep. Ocasio-Cortez also wondered if she was projecting “something onto him,” but she claims that a staffer echoed her sentiments.

“We couldn’t tell, we couldn’t read if this was a good situation or a bad situation,” she said. “Like so many other communities in this country, just that presence doesn’t necessarily give you a signal if you’re safe or not. So the situation did not feel ok.”

Then, the Congresswoman inexplicably compared Republicans who understandably reject the Democrats’ blame for the extremists’ attack with the “tactics of abusers.”

The Congresswoman also accused Senator Ted Cruz, claiming that he “almost had me murdered.” These are not the claims of a stable person. It also isn’t inherently admirable for her to broadcast to the world that she is going into therapy, while divulging all of the political and personal details of what she wants to discuss in therapy.

But to be honest, it already appears that AOC has ‘therapy’ on a daily basis with the millions of followers who cling to her every word. All Americans should wish her success in “therapy,” and that she recovers soon.