The Wisconsin legislature has approved an audit for the 2020 election. The news was reported by Right Side Broadcasting Network on Friday.

The election audit details were reported earlier by the Wisconsin Examiner. 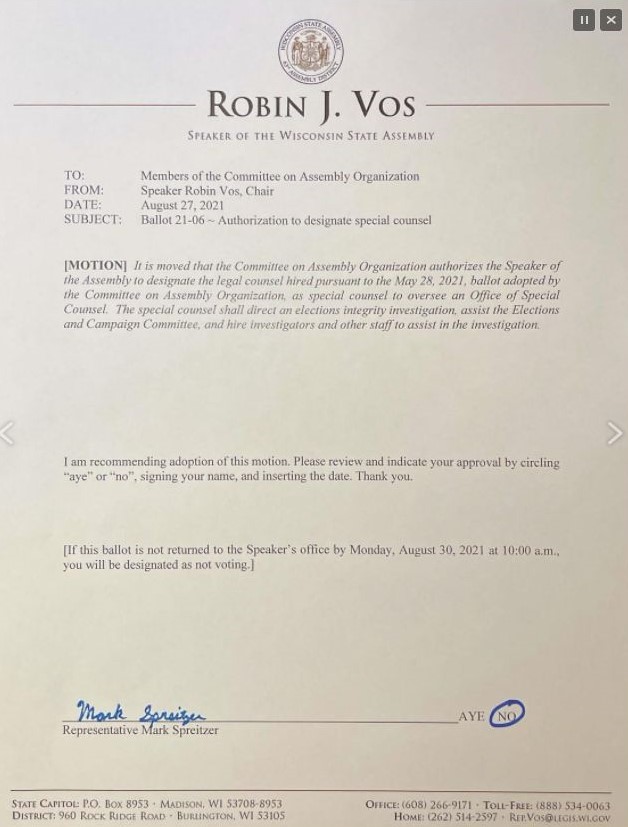 A copy of the letter via Rep. Mark Spreitzer.

“With no public hearing or public meetings — using merely a paper ballot distributed by Republican leadership to members’ offices — the committee that sets the Legislature’s agenda voted along party lines 5-3 to hire staff and officially begin an election audit under the direction of Speaker Robin Vos,” the Wisconsin Examiner reported.

“The brief 5-line ballot did not specify any funding — or cost limits — on the election investigation, but Republicans have indicated they plan to spend $680,000 on ‘at least to start’ in their hunt to find fraud and a ‘steal’ of the presidential election,” the report continued.

“The actual ballot wording allows Vos to appoint someone to ‘oversee an Office of Special Counsel’ investigating the integrity of the election (Well before the vote he had already tapped former Supreme Court Justice Michael Gableman — an outspoken critic of the 2020 presidential election),” the report added.

The Examiner reported also added essential background on the audit.

“The Wisconsin presidential election is also being audited by the Legislative Audit Bureau, a nonpartisan legislative agency,” the report noted. “And it has been confirmed as accurate in three canvases, two partial recounts, random machine audits, the Wisconsin Elections Commission oversight and withstood various court challenges.”

“In a sign that there is still a division among Republican election skeptics, some legislators are getting lobbied to support the Brandtjen audit instead of Vos’ plan,” the report added. “Previously, that audit was referred to by supporters as a ‘cyber forensic audit,’ but with Vos now calling his audit by that name, Brandtjen’s supporters are now demanding a ‘Full Forensic Physical and Cyber Audit’ (or FFPCA for short) in contrast with Vos’ ‘orensic cyber audit.’ Proponents of election-fraud theories, both groups and individuals, continue to express dissatisfaction with Vos on various message boards and email lists viewed by the Examiner. A key difference appears to be their desire to seize machines and materials.”

The news comes amid Sen. Ron Johnson throwing cold water on claims of election fraud in the State of Wisconsin.

“Johnson was seen rebutting suggestions by Democratic activist Lauren Windsor, who was posting as a Trump supporter, that the election was stolen in a video Windsor posted of a GOP event just outside Milwaukee on Sunday,” Forbes continued. Johnson noted Trump underperformed other Republican candidates further down the ballot, arguing Trump ‘lost Wisconsin’ because ‘51,000 Republicans didn’t vote for him’ and that there’s ‘nothing obviously skewed about the results’.”

“Johnson nevertheless expressed support for an audit into Wisconsin’s election results – which were already partially subject to a Trump-funded recount in November that expanded Biden’s lead – in a separate video posted by Windsor,” the report added.