The Biden administration’s Chair of of the White House Council of Economic Advisers, Cecilia Rouse, was undoubtedly expecting a cake walk when she came onto CNN on Monday.

What she got instead was a pie-in-the-face. Watch:

“The latest consumer price index numbers show inflation rising at the fastest pace in more than four decades in this country to 8.6% for the 12 months ending in May,” the CNN host Jim Sciutto pointed out. 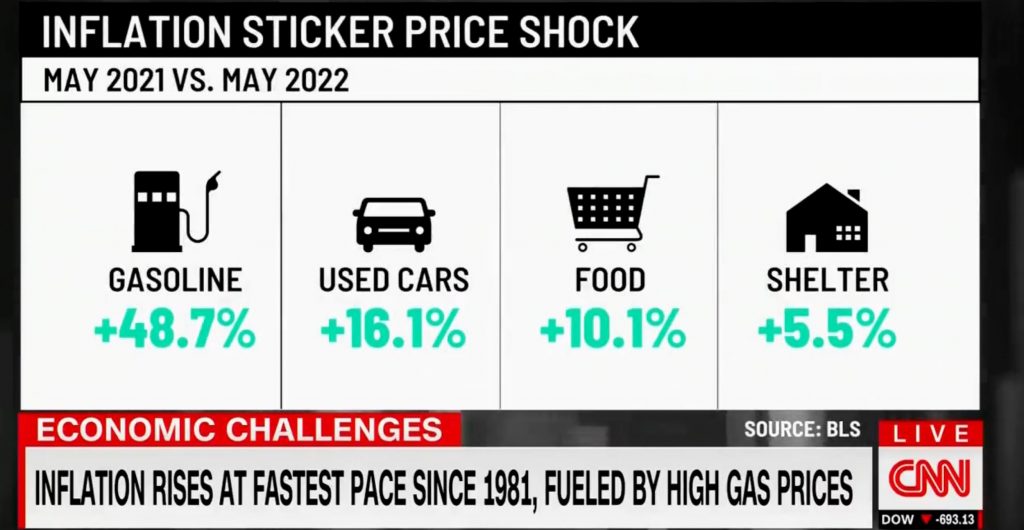 “Experts say the spike and the cost of gas in particular, but also food and housing is driving inflation higher,” he noted.

“You’ve seen those numbers,” he said. “I know you’re well aware of them. I wonder does the White House see any relief in these numbers for Americans in the near future? And if so, when?”

“So, look, the president very much understands, and we very much understand, that we’ve got uncomfortably high inflation,” Rouse responded. “What we saw in the data this month was that month-on-month prices increased overall, the headline CPI increased about 1% and about half of that was due to food and energy, which can be almost directly tied to Putin’s invasion of Ukraine. And so it’s —”

Sciutto stopped her right there.

“Not just that,” he objected. “You know, it’s, it’s not prices are rising. I get it. I get the world oil markets are up. But, as you know, prices are rising for everything — used cars, rent…”

“Absolutely,” Rouse conceded with the smile draining from her face. “And so… and the president understands that. And so he has, like, he has emphasized he’s focused on this, you know, as part of his plan.

“And this president has said he is not going to do that,” she went on. “Rather, he would like to follow fiscal policy that is complimentary to what the Federal Reserve is trying to do. So for example, this requires working with Congress. And so he does need Congress to work with him, increasing taxes on the very wealthiest Americans, on our biggest corporations, which would reduce the deficit, would help address inflation, while also reducing while reducing the deficit.”

“He also wants to work with Congress to address those costs, that he recognizes families face in terms of prescription costs, childcare, and energy costs. Okay?” she continued.

“He is looking for what he can do administratively,” Rouse added. “Whether that’s working with oil companies and refineries asking them, we recognize you’ve got capacity challenges. What can we do to help you maintain your refining capacity and bring more oil on online? So he is doing what he can unilaterally, but some of this will also require Congress.”

While Biden has continuously tried to blame his Russian counterpart for soaring inflation, even favorably outlets like the Washington Post have dinged him for his “Putin Price Hike” claims.

“Inflation and gas prices were already bad, and it’s a difficult task to pin their rise on a war that isn’t front-and-center for most Americans,” the Post’s Aaron Blake noted in late March. “Evidence now suggests the narrative is coming up well short. Domestic pricing concerns are far outpacing Ukraine on Americans’ list of priorities, and Biden’s poll numbers on his handling of the economy continue to hit new lows. Whatever stomach Americans had for higher prices to support the war in Ukraine, it doesn’t appear particularly strong.”

Joe Biden’s approvals recently fell again to its lowest level of his presidency, while voters express low confidence in the president’s handling of inflation, as well as the economy as a whole.

Biden ‘Jokes’ About Sending Political Opponents to Jail. The FBI Actually Does It the Very Next Morning