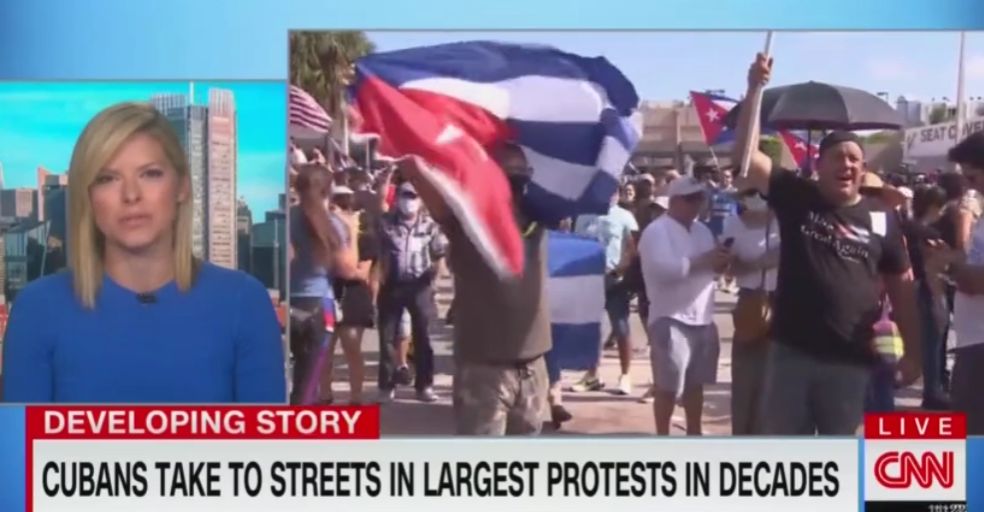 A New York University professor who is a scholar of Cuban history appeared on CNN to give her narrative about why the Cuban people are rising up against its oppressive government. It didn’t take long for the Biden administration itself to dispute her dishonest pro-socialist narrative.

“Now there are a lot of Americans who will watch this and will think this came out of nowhere. And I’m — just get your important perspective on this. How much of this do you think has to do with the pandemic and the impact that the virus has had — the pandemic has had?” Kate Bolduan asked.

“There is no question that the pandemic has made everything much worse. I think the combination of the pandemic and the tightening of the embargo under — under Trump has made, you know, an always difficult economic situation in Cuba much worse,” Ferrer said.

“People have lost access to remittances from their family because of new American restrictions, the pandemic has meant that travel has been cut off, so people can’t get visits from family and friends, bringing supplies and goods, and the tourist sector has dried up, so people who had started small businesses catering to tourists have lost their businesses,” she continued.

“So there is no question that — that the pandemic has exacerbated problems that were already there,” Ferrer went on. “You know, Cuba suffered greatly when the — when the Soviet Union collapsed and that initiated a period in Cuba called a Special Period in which there were some protests, somewhat similar to this.”

“But, again, those were smaller, mostly in Havana, you didn’t have social media to amplify them and to encourage people across other parts of the island,” she continued. “But in many ways the country never fully recovered from that. And you know, now in 2021 it’s a very different world than 1994. People are that much more tired of frustration.”

“Most Cubans were born or not most, I would say about a third of the Cuban population was born after the collapse of the Soviet Union,” she said. “So they have — they have no experience, and no memory of a revolution, not in economic crisis. And so I think — I think it’s — it’s a cumulative thing. It’s the pandemic, it’s the [indecipherable] the embargo on top of an already difficult reality.”

Firstly, the argument that the Soviet Union providing aid to the Cuban people to keep it out of “economic crisis” is a lie. Thousands of Cuban refugees fled from the communist island due in no small part to poverty and economic repression.

The professor’s narrative is also one that is being amplified throughout the American media. It happens to be shared by the Democratic Socialists of America’s International Committee:

DSA stands with the Cuban people and their Revolution in this moment of unrest. End the blockade. pic.twitter.com/jzFVrthoMm

The Biden administration itself has refuted this dishonest argument. Secretary of State Tony Blinken issued a statement on Monday putting this argument to bed.

“I think it would be a grievous mistake for the Cuban regime to interpret what is happening in dozens of towns and cities across the island as the result or product of anything the United States has done,” Blinken said. “It would be a grievous mistake because it would show that they simply are not hearing the voices and will of the Cuban people. People deeply, deeply, deeply tired of the repression that has gone on for far too long, tired of the mismanagement of the Cuban economy, tired of the lack of adequate food and, of course, an adequate response to the Covid pandemic. That is what we are hearing and seeing in Cuba. And that is a reflection of the Cuban people, not of the United States or any other outside actor.”

Blinken’s statement, which helpfully corrects the record against false accusations that the Cuban economy is the fault and responsibility of the United States, omits two words: Socialism or communism.

“We stand with the Cuban people as they bravely assert their fundamental and universal rights, and as they all call for freedom and relief from the tragic grip of the pandemic and from the decades of repression and economic suffering,” Biden’s Twitter statement on Monday said.

But White House Press Secretary Jen Psaki admitted in a press conference it was not even personally issued by Biden.

“We, of course, are monitoring closely, you saw the statement the president — we put out in the president’s name this morning, in his voice of course, conveying his support for the people of Cuba,” Psaki said.

The messaging compounds the problematic statement from a State Department official on Sunday.

Peaceful protests are growing in #Cuba as the Cuban people exercise their right to peaceful assembly to express concern about rising COVID cases/deaths & medicine shortages. We commend the numerous efforts of the Cuban people mobilizing donations to help neighbors in need.

“Peaceful protests are growing in #Cuba as the Cuban people exercise their right to peaceful assembly to express concern about rising COVID cases/deaths & medicine shortages,” Julie Chung, the Acting Assistant Secretary for U.S. Department of State’s Bureau of Western Hemisphere Affairs, tweeted. “We commend the numerous efforts of the Cuban people mobilizing donations to help neighbors in need.”

Donald Trump issue a statement of support for the Cuban people, while blasting Biden for failing to stand up to the Communist regime.

“Big demonstrations are breaking out in Cuba and Miami in protest of the Communist Cuban Government (although, today there are zero protesters in Cuba—you know what that means!),” Trump stated.

“Don’t forget that Biden and the Democrats campaigned on reversing my very tough stance on Cuba,” he continued. “Remember when Obama attended baseball games with Castros while they imprisoned, beat, and killed the Cuban people.”

“I stand with the Cuban people 100% in their fight for freedom,” the statement went on. “The Government must let them speak and be free!”

“Joe Biden MUST stand up to the Communist regime or—history will remember,” Trump added. “The Cuban people deserve freedom and human rights! THEY ARE NOT AFRAID!”

Trump’s full-throated condemnation of Communism is a marked contrast to the weak statements being put out by the Biden administration. Those have proven to be a revealing barometer about what the administration really believes about the inherently oppressive ideology.