Joe Biden waited nearly 100 days to deliver a Joint Address to Congress. The results for Biden’s prime-time address are in — and they don’t even come close to stacking up to his presidential predecessors.

CNN polled the viewers of the address and they gave Biden a “very positive” reaction at a clip that was far below recent presidents. Including Donald Trump.

You read that right: The “great unifier” Biden, whom we are told got massive, unprecedented turnout in the 2020 election, was unable to move even a liberal audience to feel “very positive” about his address. Donald Trump, whom the media spent over a year vilifying before his 2017 address, provoked significantly more “very positive” reaction.

Although Biden attempted to put a rosy spin on a gloomy speech, it may have been the sheer temerity of it that caused a disconnect. One passage is glaring in its intellectual dishonesty.

“Tonight, I come to talk about crisis and opportunity,” Biden said. “About rebuilding the nation, revitalizing our democracy, and winning the future for America. I stand here tonight one day shy of the 100th day of my administration.”

“A hundred days since I took the oath of office, lifted my hand off our family Bible and inherited a nation — we all did — that was in crisis,” he continued. “The worst pandemic in a century. The worst economic crisis since the Great Depression. The worst attack on our democracy since the Civil War. Now, after just 100 days, I can report to the nation, America is on the move again.”

Another issue for Biden’s address was the bizarre optics. Speaker Pelosi had implemented rules for the Joint Address that required a de minimus audience, reminding some of the sparsely attended Biden ‘rallies’ during the 2020 campaign. Despite being fully vaccinated, everyone wore masks while fist-bumping, shaking hands, and violating ‘social distancing’ rules; except the president while he was speaking.

The self-contradictory narrative even caused an editorialist at The Washington Post to remark Biden had sent the “wrong message” to the audience about vaccinations and the current state of the ‘pandemic.’ 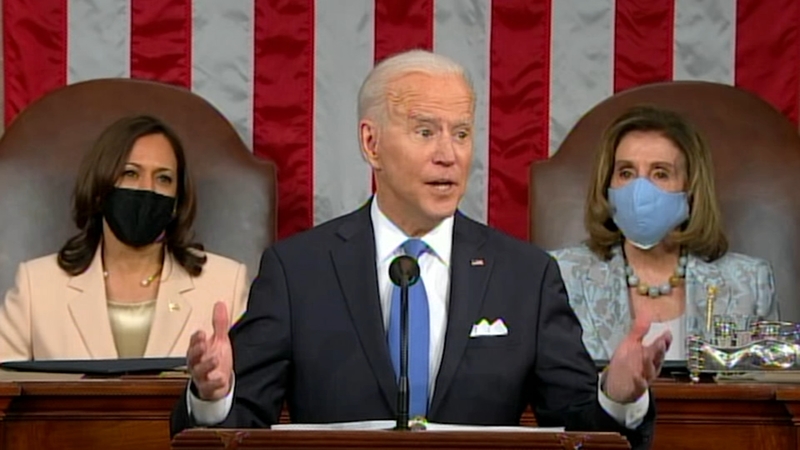 “The 200 attendees entered the 1,600-person-capacity House chamber spaced apart and wearing masks,” opinion contributor Leana Wen wrote. “Some appeared to be double-masked. They were asked not to make physical contact, though some still fist-bumped or shook hands. There were markers indicating which seats could be occupied, with numerous empty spaces in between. As the president spoke, the vice president and speaker of the House sat behind him, both clad in masks.”

“If I didn’t know better, I would have thought this was six months ago, before Americans had access to safe, highly effective vaccines,” Wen added.

The new media continues to shore up Biden’s weak public image with Potemkin Village polling that grossly undersamples Republicans, who are nearly half of the U.S. electorate. SSRS, the same firm that CNN contracted with to poll Biden’s Joint Address to Congress, sampled only 25 percent of Republicans while giving Biden an ‘approval rating’ of 53 percent. Under Biden, the left-wing media are having to carry more water than the animated brooms in the Sorcerer’s Apprentice.

While Chris Wallace may have approved of Biden’s address, the unfiltered audience reaction was one of boredom and disapproval. Senator Ted Cruz provided one of the more memorable shots of the night merely by getting sleepy during the speech.

He is all of us pic.twitter.com/18Lpo8EDPp

The difficulty Cruz found staying awake during the prime-time address reinforced his message that the Biden presidency is “boring but radical.”

Joe Biden is deliberately being boring, but the substance of what he is saying is radical. #BoringButRadical pic.twitter.com/37YS701pyn

At the end of the night, however, Senator Tim Scott of South Carolina delivered a rebuttal that caused the left to lash out with racist epithets. Senator Scott’s remark that “America is not a racist nation” sent the left over-the-top.

But it was Scott’s remarks on the Democrats’ designs on a “power grab” in American elections that are most remarkable.

“The state of Georgia passed a law that expands early voting; preserves no-excuse mail-in voting, and, despite what the president claimed, did not reduce Election Day hours,” Scott said.

“If you actually read this law, it’s mainstream,” he continued. “It will be easier to vote early in Georgia than in Democrat-run New York. But the left doesn’t want you to know that. They want people virtue-signaling by yelling about a law they haven’t even read. Fact checkers have called out the White House for misstatements. The president absurdly claims this is worse than Jim Crow. What is going on here?”

“I’ll tell you. A Washington power grab,” he added. “This misplaced outrage is supposed to justify Democrats’ new sweeping bill that would take over elections for all 50 states. It would send public funds to political campaigns you disagree with and make the bipartisan Federal Election Commission partisan.”

“This is not about civil rights or our racial past,” he added. “It’s about rigging elections in the future. And, no, the same filibuster that President Obama and President Biden praised when they were senators, the same filibuster that the Democrats used to kill my police reform bill last year, has not suddenly become a racist relic just because the shoe is on the other foot.”

Tim Scott was infinitely more effective than Biden was in delivering a coherent message, which was one reason that the left-wing media had nothing to say except for vile attacks. Trump drew more positive reaction at his first presidential address to Congress, as well. But to hear the media tell it, Biden delivered an FDR-like speech that showed the president knows how to lead America out of its darkest hours. In virtually all ways, this narrative is a media-created myth.