The case of Ashli Babbitt’s death has added another layer of mystery. There was a cremation order filed by the Medical Examiner presiding in her case only two days after Babbitt was shot and killed by an officially unidentified Capitol Police officer.

The discovery was made by Judicial Watch by FOIA request. Much of the information pertaining to Babbitt’s case that involves the Capitol Police is redacted, because it is legally an unaccountable body that reports directly to the Congress.

The Medical Examiner’s office cremation request was filed “successfully” on January 8, 2021, only two days after Babbitt was shot and killed.

The bizarre twist was among the 1140 pages of documents related to the Babbitt case recently obtained by Judicial Watch. Many of the pages are withheld because FOIA purportedly does not apply.

“The records were obtained in response to a Freedom of Information Act (FOIA) lawsuit concerning two FOIA requests submitted by Judicial Watch on April 8, 2021 to the Metropolitan Police Department and the Office of the Chief Medical Examiner for records related to Babbitt’s death,” the legal watchdog group reported in its release.

According to Judicial Watch findings, Grant Greenwalt, Manager of the Crime Scenes Sciences unit of the DC Department of Forensic Sciences, forwards Ashli Babbitt’s fingerprints and related documents to David Chumbley, an officer in the DC Police Department. Chumbley “forwards the prints on from his iPhone at 8:06 p.m. on January 6 to someone identified as Jamese Kororma in the DC government,” Judicial Watch found. The email sent to “Jamese Kororma” resulted in multiple Microsoft “undeliverable” messages being returned, “written in what appear to be Chinese characters.”

The “undeliverable” email copy is provided below. At the very least, it suggests problems with the IT security in the Babbitt case. 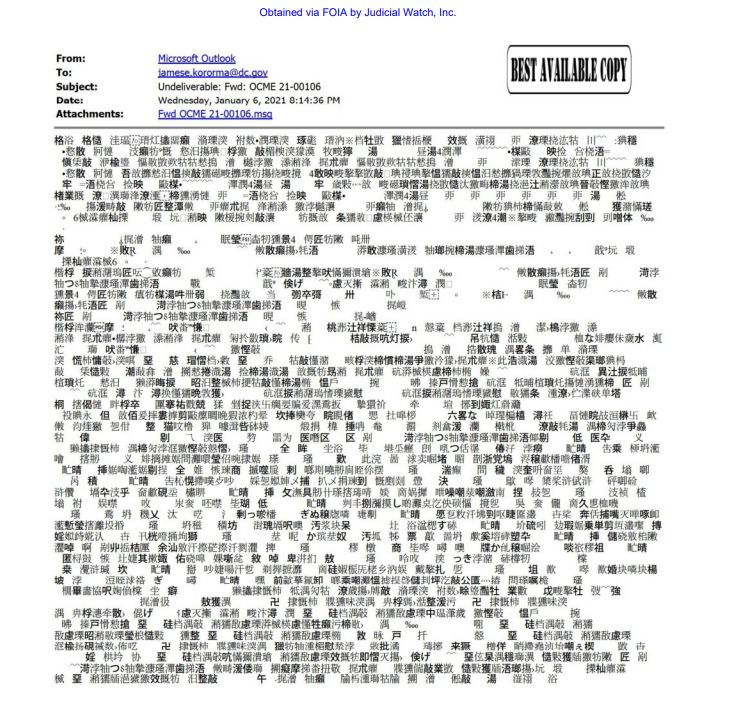 The email compounds suspicions about the handling of the Babbitt case, due to the secretive nature and extreme lack of transparency investigators have shown the public in the high-profile case.

“There is intense public interest in the shooting of Ashli Babbitt at the Capitol on January 6,” Judicial Watch President Tom Fitton said. “The continued secrecy and delayed release of information about the shooting death of Ashli Babbitt are suspicious and smacks of politics. That Americans still have no information about who killed her or any police report about her death is a scandal of epic proportions.”

The OCME did not release cause and manner of Babbitt’s death until April 7, 2021, as Judicial Watch notes. The Cause of Death was a “gunshot wound to the left anterior shoulder.” The “Manner of Death was listed as “Homicide.”

“Chief Medical Examiner Dr. Francisco J. Diaz said the cause of death for Babbitt, 35, was a gunshot wound to the left anterior shoulder,” the Epoch Times earlier reported. “Her manner of death was ruled homicide, his office said.”

On February 25, the Acting House Sergeant at Arms appeared before a House committee and appears to have named Ashli Babbitt’s shooter.

Timothy Blodgett, in an exchange with Rep. Herrera-Buetler during a hearing on Jan. 6 that appeared on C-SPAN, seems to have casually dropped the name.