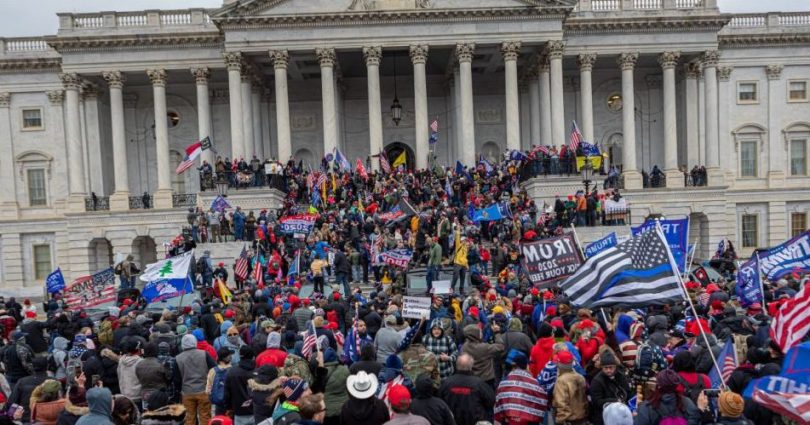 Despite the news media’s frantic insistence that an obscure, fringe group of conspiracy theorists known as Q Anon played a major role in the Capitol riots, a new academic study is proving that the claims are yet more media ‘misinformation.’

“The QAnon conspiracy theory and a stew of misinformation fueled the insurrection at the Capitol,” the Insider claimed on January 7th.

“[T]he voter-fraud conspiracy theories peddled by Trump, his allies, and his supporters since the election were amplified by and, in most cases, originated from powerful figures in the QAnon ecosystem,” the publication claimed.

Yahoo News also attempted to weave a narrative that those who led the planned Capitol building siege were driven by the Q Anon theory.

“Ever since a violent mob, including some with ties to the cultlike Q movement, invaded the U.S. Capitol in a failed attempt to stop Congress from certifying the results of the presidential election, Q believers have been trying to reconcile what did — and didn’t — happen in Washington this week with their own conspiracy-ridden world view,” Caitlin Dickinson reported.

It is important to note that there is very little evidence to back up the claims that widespread belief the 2020 election was illegitimate has anything to do with Q Anon or any other conspiracy theories. Tens of millions of Trump voters who have never heard of Q Anon, or are largely unfamiliar with its views, nonetheless believe the 2020 election was not free and fair. 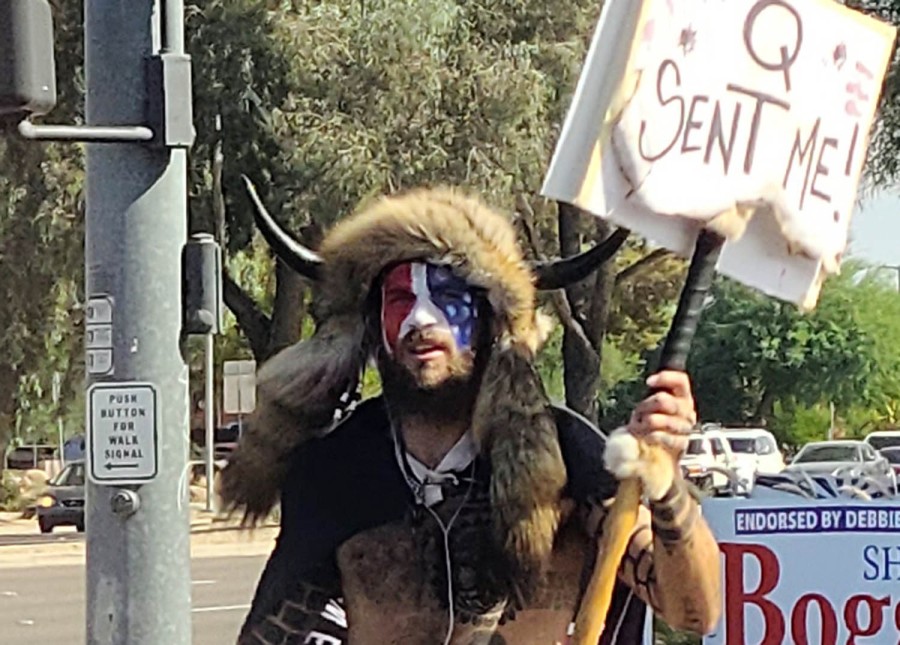 There are a number of reasons why so many journalists were quick to conclude that Q Anon was a factor in the Capitol riots: The appearance of Q Anon banners, and of course, the bizarre figure of the Q Anon Shaman Jake Angeli, who is also proven to be an environmental extremist.

A study led by professors at the University of Chicago and the University of Michigan have found that only a sliver of the Capitol rioters had ties to any right-wing militia groups. Nearly 90% were “unaffiliated.” 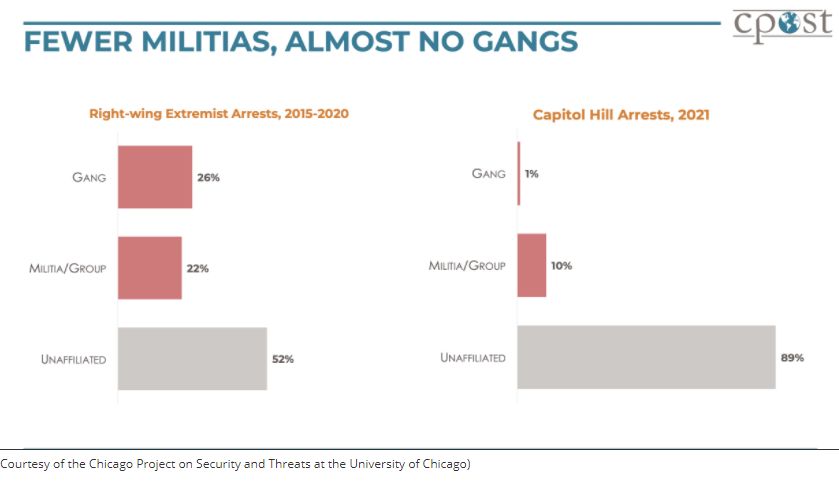 “A new study from the Chicago Project on Security and Threats at the University of Chicago finds that only 10% of the Capitol rioters had ties to right-wing militia groups like the Proud Boys and Oath Keepers,” WTTW reported.

“Our findings are really quite surprising. It turns out only a small fraction are a collection of right-wing militias. What we see is a new mass political movement with violence at its core,” said Robert Pape, a political science professor of the University of Chicago.

“The study analyzed available information on more than 200 people arrested for entering the U.S. Capitol or Capitol grounds on Jan. 6,” the report continued. “It compares the findings with far-right extremists arrested for deadly violence between 2015-2020, as well as older data.” 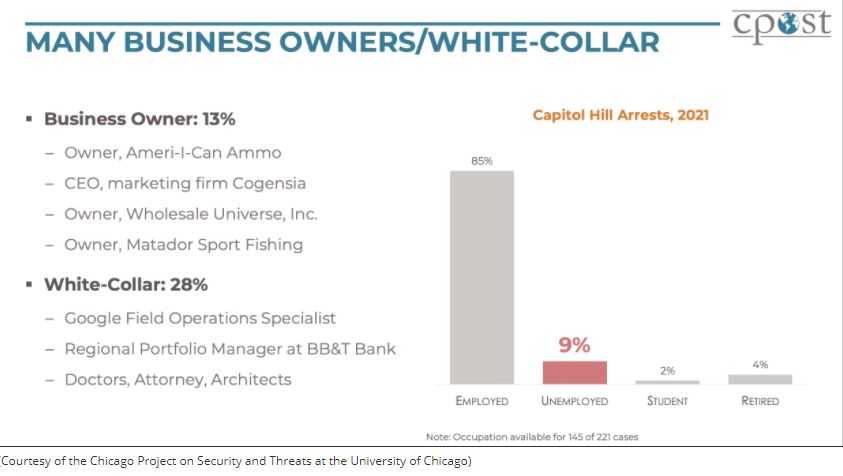 Surprisingly, 85% of those who participated in the Capitol riot were employed, and about 40% were business owners or held white collar jobs.

“Normally, we don’t even have a category for ‘business owner’ when we study political violence, so this is a very big sign that we’re dealing with a new political movement with violence at its core that can’t be reduced to the usual suspects,” Pape remarked.

Thus, we are talking about a drastically different causal mechanism than the ones hypothesized by the irresponsible left-wing media. We are not talking about an uprising caused by a media misinformation eco-system, such as that purportedly fueled by social media website Parler, but one that was driven by structural socio-cultural factors.

Another important linkage in the new study is that the majority of the rioters came from blue counties — ones that voted for Joe Biden.

“The study also found that more than half of the arrested Capitol rioters came from counties President Joe Biden carried in the 2020 presidential election,” the report said.

“Most people thought right after the insurrection that these insurrectionists are coming from the reddest parts of America. That’s just not the case,” Pape commented. 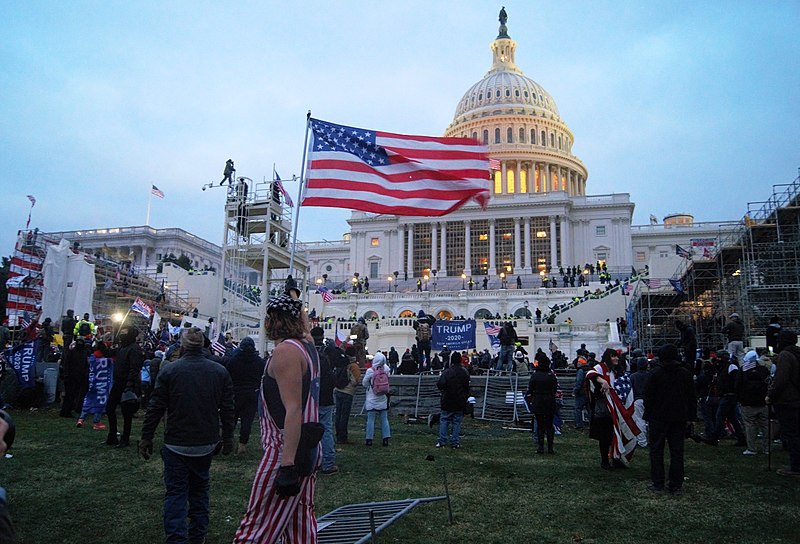 The research paper’s findings suggest that these voters felt surrounded by Biden voters who had deprived them of their political ‘just desserts.’ These protesters came from Trump-voting “islands,” where they were virtually surrounded by liberals.

As pointed out by Victoria Taft at PJTV, researcher Austin Wright said living in those leftist areas “played a significant role.”

“Social isolation and the perception of being threatened by neighboring areas that largely hold opposing political views also played a significant role in who was there,” Wright said.

There are other structural factors that would indeed pressure such voters, beyond simple political differences. The lockdowns not only further isolated such Trump voters socially, but they often needlessly and unlawfully deprived them of business income.

A.O. Hirschman’s famous “exit, voice, and loyalty” (EVL) theory speaks to the frustration that can arise when citizens cannot rely on expected “voice” mechanisms, such as elections. In summary, there are three traditional choices in the EVL model (the extended model adds “Neglect” as option): “Exit” the system; “Voice” one’s preferences for change; and “Loyalty” to the system.

The elections were perceived by many Trump voters as having failed them. This was not due simply to beliefs about voting machines’ security flaws, but also about unlawful state changes on mail-in ballots, a lack of transparency and accountability regarding mail-in ballots (such as selective auditing in Georgia), and massive funding of ‘drop boxes’ in heavy blue areas.

This perceived unfairness led a sensitive minority of Trump voters to believe that their “voice” had been silenced or canceled out, and they were not about to choose “exit” from the U.S. political system. They went to D.C. to see what the president had to say and several protesters at the Capitol did not heed his order when he said to “peacefully make your voices heard.”

Their alternative method of “voice” meant to march on the Capitol building and for some of the protesters to breach it.

The theory is fleshed out by Clark, Golder and Golder in a research article, “Power and Politics: Insights from an Exit, Voice, and Loyalty Game.”

“Broadly speaking, there are three possible responses – the citizen can EXIT, use VOICE, or demonstrate LOYALTY,” the authors write. “Choosing to EXIT means that she accepts the deleterious change in her environment and she alters her behavior to optimize in the new situation. For example, if the citizen does not like the fact that her state has introduced a handgun ban, she could accept the situation and simply move to another state where handguns are allowed. Choosing to use VOICE means complaining, protesting, lobbying, or taking other forms of direct action to try and change the environment back to its original condition. For example, if the state increases the citizen’s tax rate, she might join an anti-tax protest to pressure the state to reverse its tax hike. Choosing to demonstrate LOYALTY means that she accepts the deleterious change in her environment but makes no other change to her behavior.”

Further revolutionary structural issues relate to the manner in which the Trump economy led to a boom for many of the small business owners, followed by an economic downturn that projected to be sustained under the Biden presidency. This comports with Davies’ J-curve theory, which argues that revolutionary conditions increase when periods of improvement are followed by sharp downturns. The theory of Ted Gurr, author of “Why Men Rebel,” on the “relative deprivation” that such rioters must have felt, also has explanatory power.

“In a series of cross-national studies, Gurr and his collaborators showed that both short-term economic deprivation and long-term strains, such as social and economic discrimination, contribute to an increased likelihood of political insurrection,” Brittanica summarized. “They also found that larger group-based inequalities, including differential opportunities for advancement of various social groups, can intensify feelings of envy and frustration directed against those who are privileged. These feelings can also create elevated and often unrealistic expectations of redress on the part of underprivileged groups.”

Undoubtedly, the new research showing that only 10% of Capitol rioters were identified as belonging to right-wing militia groups, and roughly 90% were ‘unaffiliated,’ undercuts the media narrative as simplistic at best, dangerously naive at worst.

The left-wing media’s daily exercise in group think latched onto the first bogeyman that leapt to mind: Q Anon fit the bill, and so they ran with that.