Democrats are excited about a new study that suggests that Trump voters are much more likely to die from Covid-19 than Biden voters. Some are even musing it might help sway the 2020 election.

One health expert who has appeared repeatedly on MSNBC and CNN throughout the Covid-19 pandemic, Dr. Peter Hotez of Baylor University and the Texas Children’s hospital, shared the study on Twitter.

Dr. Hotez, who has an impressive background in actual vaccine development, was reacting to the views of Sarah Palin, who recently said that she would get the coronavirus vaccine “over my dead body.”

At what point do we define such public remarks made by former or current elected officials as hate speech/rhetoric? Since June 1, 2021, I estimate 200,000 unvaccinated Americans lost their lives to Covid because they refused vaccinations despite their widespread availability. https://t.co/QpmvEjwar6

“At what point do we define such public remarks made by former or current elected officials as hate speech/rhetoric?” he asked. “Since June 1, 2021, I estimate 200,000 unvaccinated Americans lost their lives to Covid because they refused vaccinations despite their widespread availability.”

It is not clear where Dr. Hotez was getting his figures, since nearly as many Americans have died under President Biden as under former President Trump, despite the widespread availability of the vaccine and the prevalence of natural immunity. Furthermore, excess mortality in 2022 is roughly the same as it was in 2021.

But to break apart the chart shared by Dr. Hotez, which he credited to first seeing from Dr. Eric Feigl-Ding, there appears to be cause for concern. 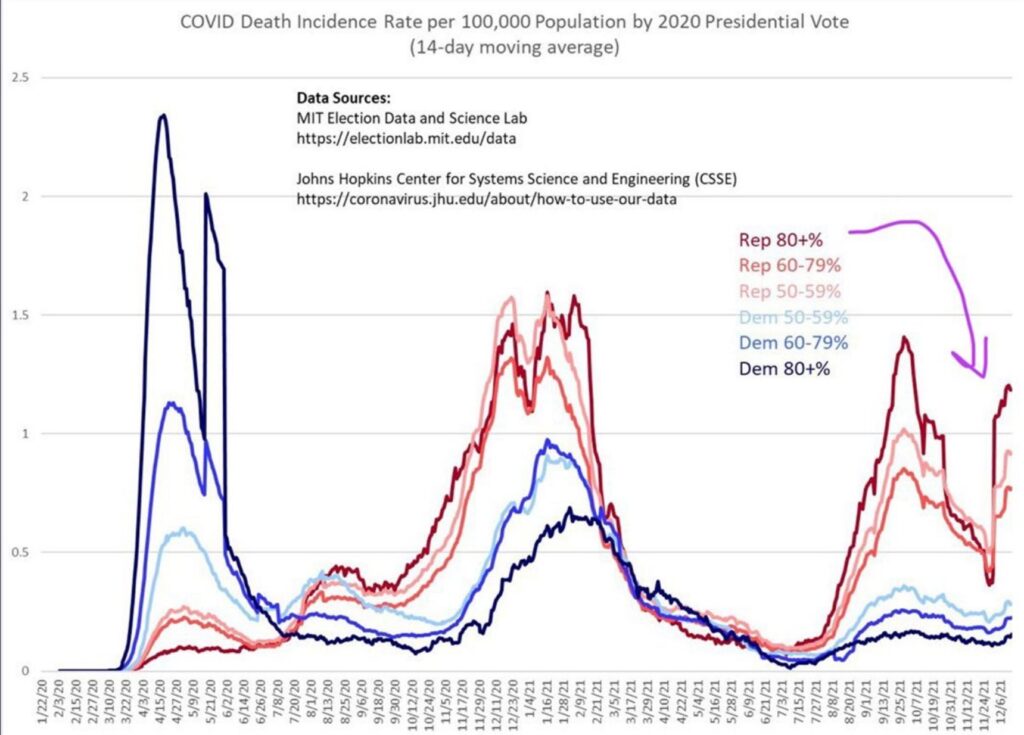 The chart appears to be based on research that was corroborated by NPR based on CDC data. Significantly, it runs through 12/6/2021.

“Since May 2021, people living in counties that voted heavily for Donald Trump during the last presidential election have been nearly three times as likely to die from COVID-19 as those who live in areas that went for now-President Biden.” NPR reported on December 6. “That’s according to a new analysis by NPR that examines how political polarization and misinformation are driving a significant share of the deaths in the pandemic.”

“NPR looked at deaths per 100,000 people in roughly 3,000 counties across the U.S. from May 2021, the point at which vaccinations widely became available,” the report continued. “People living in counties that went 60% or higher for Trump in November 2020 had 2.73 times the death rates of those that went for Biden. Counties with an even higher share of the vote for Trump saw higher COVID-19 mortality rates.”

“In October, the reddest tenth of the country saw death rates that were six times higher than the bluest tenth, according to Charles Gaba, an independent health care analyst who’s been tracking partisanship trends during the pandemic and helped to review NPR’s methodology,” the report added. “Those numbers have dropped slightly in recent weeks, Gaba says: ‘It’s back down to around 5.5 times higher’.”

“The trend was robust, even when controlling for age, which is the primary demographic risk of COVID-19 mortality,” NPR went on. “The data also reveal a major contributing factor to the death rate difference: The higher the vote share for Trump, the lower the vaccination rate.”

“The analysis only looked at the geographic location of COVID-19 deaths,” it continues. “The exact political views of each person taken by the disease remains unknowable. But the strength of the association, combined with polling information about vaccination, strongly suggests that Republicans are being disproportionately affected.”

CNN also touted a study in early December that showed Trump-voting states had a 50% higher risk of dying from COVID-19.

“That’s according to a new CNN analysis of data from Johns Hopkins University, which shows a direct parallel between low vaccination rates and higher death rates in individual states,” CNN/WKRC reported. “Pro-Trump red states had a 52% higher average of COVID-19 deaths per capita than blue states, researchers found.”

Indeed, that’s enough to case Donald Trump’s recent statements on the vaccine in a different light, even as both Trump and his voters are adamantly opposed to unlawful vaccine “mandates.”

There is no strong reason to doubt the validity of the study’s results, even when accounting for the fact that older voters tending to vote more Republican. But it is important to note that since the study’s results were released, blue states like New York, New Jersey, and Michigan have ascended in the rankings of Covid-related mortality per 100,000. Early on, blue states New York and New Jersey were among the leaders, suggesting that population density, as well as regional and seasonal factors, impact these figures at any given point in time. 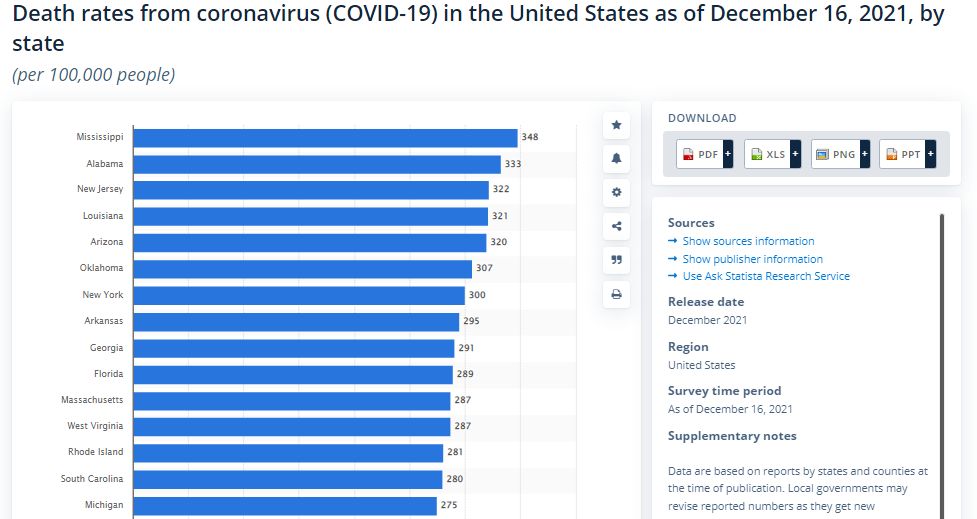 Dr. Hotez also appeared recently on CNN and broke the news that even people who are vaccinated and boosted can get symptomatic “breakthrough” Covid.

“And even if you are boosted, you have to face the possibility that you could get symptomatic breakthrough illness going through airports and going on Ubers,” he said. “So if you are immunocompromised, I would think twice about traveling at this point, with the hope that this peak may not last as long as previous ones.”

Those who reacted to Dr. Hotez’ post on Twitter latched onto the information to make callous comments, while some were ‘optimistic’ that the results may sway the 2022 election.

“Well at least something about this virus is predictable,” one mused. “Can’t say they weren’t warned.”

“Can’t help but wonder if this is of sufficient magnitude to sway the midterm elections. Anybody out there know enough statistics to tell us?” one person, who described herself as a “doctor,” asked.

“We will know when we see the relative R and D turnout in their respective primaries,” one user responded. “That will be the tell. No one is going to talk about it out loud, but election consultants will be all over it.”

“With the amount of voter restrictions that are being put into place all over the US,” another user weighed in. “I don’t think turnout will matter anymore. The changes Republican state legislators are making right now are terrifying.”

But one user tried to throw cold water on the cause for optimism: “An extra 1 person per 100,000 is only 10 out of a million. Not enough to move many elections.”

Truly. This is the ‘bad news’ for any Democratic voters who believe Covid can reduce the political influence of Trump-voting states.

Even though past Covid variants — including the “wild” variant and Delta — may have ravaged through certain elderly, at-risk communities around America, and vaccines may have played an appreciable role in saving the lives of those who are at risk, we are facing an altogether much different situation with Omicron. The death rates in most states over the last seven days are but a tiny fraction of those seen over the course of the pandemic: They range from one-third to one-hundredth of the overall Covid-related mortality rates.

That’s got to be disappointing for twisted individuals who were hoping that Covid could help Democrats win in the 2022 midterm elections.