‘Donald Trump is through in politics,’ they said. ‘He’s through working in this town,’ they crowed. ‘He won’t be able to show his face in public,’ they boasted. ‘The disgraced ex-president is finished,’ they gloated.

All wrong. Donald Trump has done more than hold MAGA rallies since the media establishment declared his political legacy dead. He has endorsed a slew of primary candidates. And on Wednesday, one of them won in a crowded Ohio primary field. Mike Carey, a coal lobbyist aiming for the seat vacated by Republican Steve Stivers, overcame the odds and prevailed against stacked opposition.

Even the New York Times was forced to admit how surprising Carey’s win was, due to the candidate being relatively new to politics.

“And in a Republican primary near Columbus, Mike Carey, a newcomer to elected office who was largely unknown before being endorsed by Mr. Trump, easily beat out 11 rivals, many of them with much longer records in Ohio politics,” the Times conceded.

The Washington Post had earlier staked out a position in an editorial that the president’s choice ‘could lose’ and it ‘could be a huge blow to the former president.’

On Thursday, Donald Trump issued a statement essentially telling Washington Post and all the rest of the media haters to ‘eat crow.’ 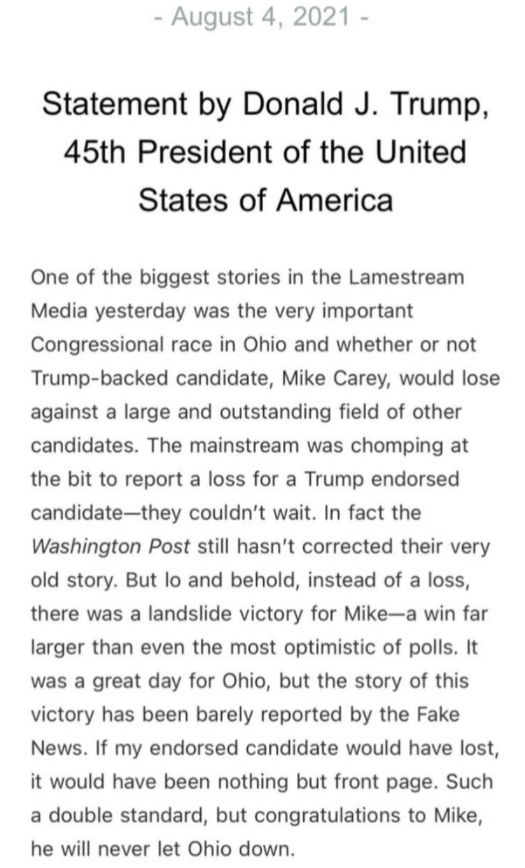 “One of the biggest stories in the Lamestream Media yesterday was this very important Congressional race in Ohio and whether or not Trump-backed candidate, Mike Carey, would lose against a large and outstanding field of other candidates.”

“The mainstream was chomping at the the bit to report a loss for a Trump endorsed candidate –  they couldn’t wait,” he continued. “In fact the Washington Post still hasn’t corrected their very old story.”

“But lo and behold, instead of a loss, there was a landslide victory for Mike – a win far larger than even the most optimistic of polls.”

“It  was a great day for Ohio, but the story of this victory has been barely reported by the Fake News,” Trump added. “If my endorsed candidate would have lost, it would have been nothing but front page. Such a double standard, but congratulations to Mike, he will never let Ohio down.”

Mike Carey won the 15th Ohio district primary race on Wednesday by garnering 37% of the votes, while Jeff LaRe and Ron Hood finished second and third, respectively, with around 13 percent in the special primary election.