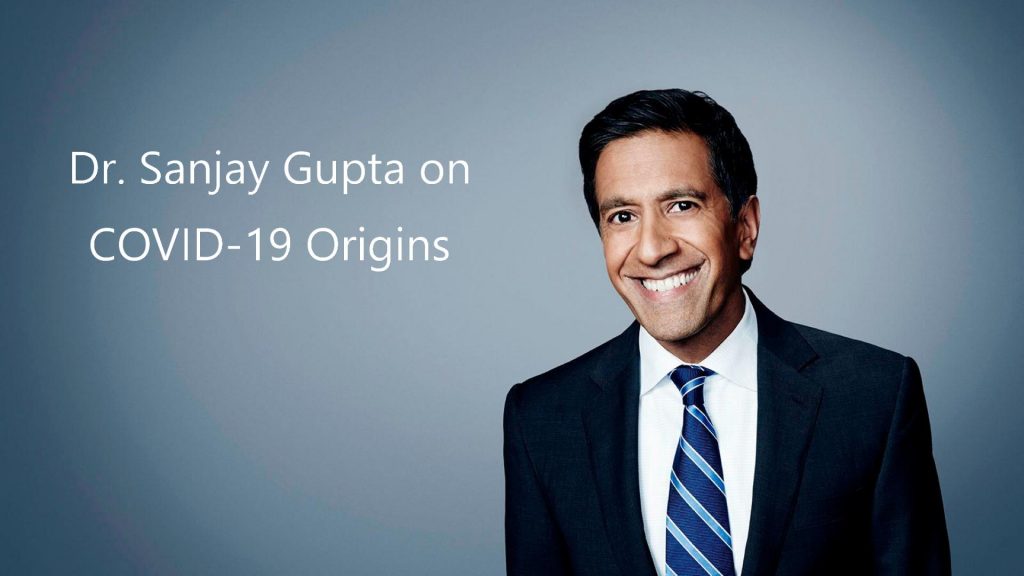 Dr. Sanjay Gupta has expressed his agreement with former CDC Director Robert Redfield that the most plausible origin for the COVID-19 virus’s origins was escape from a Wuhan laboratory. In a podcast with “The Interview,” he recently made the remarks, which is a marked break from his network CNN.

“But the biggest news I thought that came out of those interviews was former CDC Director Robert Redfield, his claim that he thought it was most likely that Covid had escaped from a lab in China, as opposed to having leapt from bat to animal to human at a wet market,” Aidan McLaughlin remarked. “And that has been treated by many in the media as a conspiracy theory. What do you think of his opinion? He is an experienced virologist.”

“He is an experienced virologist, he was also head of the CDC at the time this was happening, which means that in addition to everything that we know, he had access to raw data and raw intelligence that was coming out of China,” Dr. Gupta said. “My point is that it’s a much more informed sort of thing for him to be saying than for, you know, anybody who who may have expertise in virology, because he has a lot more knowledge and information that he has that maybe he can’t share, but is informing his opinion.”

Listen to the podcast below:

“It’s still an opinion,” Gupta continued, “but I — you know, the thing that sort of struck me is, first of all — you’ll appreciate this as a media guy — these interviews were 20+ hours of interviews. You know, ultimately, you got to distill it down into — yeah, I mean, then you have to get rid of like 18 hours of it, it’s like picking favorite children. But one of the reasons it was so long is because that part of the discussion around China, I must have asked the question a dozen different ways and I gave a lot of escape hatches for him to really clarify, ‘Well, you know, it’s anybody’s guess,’ whatever, and he did — you know, he hedged a little bit, he didn’t come out and say one hundred percent this came from — but he really was quite adamant that this is the the origin of the virus.”

“And he doesn’t think it was man-made, as you know, he just thinks that the virus had been isolated, was being studied in this lab, being exposed to human cells, and then had an accidental lab leak,” Gupta continued. “What I was not as shocked, I think, as you’re alluding to by what he said, is the fact that he said it. Because it’s been out there for some time and I’ve been looking into this, this angle of the story for a while, looking at what happened at the Wuhan Institute of Virology, even pre-pandemic, some of the regulatory lapses there and all that, and there’s reason to suspect that this is the origin of the virus and it’s the only big virology lab right in Wuhan that happened to be studying bad coronaviruses.”

“Just from an Occam’s Razor standpoint, finding the simplest explanation, it would make sense.” Dr. Gupta went on. “Also keep in mind that fourteen months now, fifteen months into this, we still don’t know for certain what the origin is. So I don’t think anybody who says, well, this obvious came from a wet market, you say, ‘Well, where’s the evidence behind that?’ There was lots of people who’d never been to that wet market who became infected, they had no contact with anybody at the wet market. There’s all these open questions. And even the World Health Organization now, Tedros, who’s the head, has said all options, all possibilities are still on the table.”

“Yeah, and I think one of the reasons why it got dismissed at the beginning was because you really only had partisans that were publicly promoting it as a theory, you know, former Secretary of State Mike Pompeo, Tom Cotton, senator from Arkansas,'” McLaughlin said. “And to have Robert Redfield, who’s a very experienced expert on this, who, as you said, had access to the raw intelligence and was CDC Director throughout the first year of the pandemic, that was really something. But now we have the World health Organization who has gone to China to conduct their investigation in partnership with China to really find out how this happened, how this originated. Do you think we’re ever going to get an answer on that? Because, obviously, the World Health Organization, initial investigation has been criticized for not being is transparent as it could be.”

It should be noted that partisans on both left and right have argued about the origins of COVID-19 and opinions should not be dismissed out-of-hand because one doesn’t like the messenger’s politics.

“Right,” Dr. Gupta said. “Let me just say one thing about Redfield as well. He’s also a private citizen now, right, so that was a big consideration for us in doing this interview, he was unbridled. No one is totally without conflict, I guess I’m not that naive to suggest that, but I think that he was much more open to speak.”

“As far as getting the answer, you know, I hate to say this, but because I think World Health Organization is such an important entity and, you know, you think, ‘Okay, I’m creating a society on Planet Earth and I’m worried about these viral sort of pandemics that might occur, let’s create a huge organization that determines health for the world — the World Health Organization, it makes perfect sense.’ The problem right now is, I do think that — I do question how independent they’re able to act,” he added.

“Even with this most recent investigation, China had a lot of say in terms of who was actually going to be on that investigative committee, Gupta added. “I talk to people who actually went to China, they were primarily relegated to a hotel in Wuhan, so they’re in Wuhan but they’re not really in parts of the the the country where they can make more accurate determinations about what happened here. So we may never really know. It’s possible.”

Now they’re saying they’re going to go to these areas where the bat caves are and check for antibodies and people that live in those areas, but, look, it’s 15 months into this,” Dr. Gupta continued. “They may have antibodies for totally different reasons now, you know. So we may never know for sure, and I think, you know — I think, as every doctor in the documentary said, China has not been forthright historically, and now there’s increasing evidence that they were not forthright now as well. They would rather this theory not be validated.”

In February, the World Health Organization backed China’s version of events that the COVID-19 pandemic could not have originated in a Wuhan lab. The results of a highly anticipated “fact-finding mission” to China appear to close the door on further official investigations.

As the Associated Press reported:

A closely watched visit by World Health Organization experts to Wuhan — the Chinese city where the first coronavirus cases were discovered — did not dramatically change the current understanding of the early days of the pandemic, said Peter Ben Embarek, the leader of the WHO mission.

The press conference on the mission’s findings had the following to say about one of the most controversial contentions:

And it allowed the joint Chinese-WHO team to rule out one theory on the origins of the virus. The Wuhan Institute of Virology has collected many virus samples, leading to allegations that it may have been the source of the original outbreak, whether on purpose or accidentally.

But experts now consider the possibility of such a leak so improbable that it will not be suggested as an avenue of future study, said Embarek, a WHO food safety and animal diseases expert.

It is difficult to discern where the Chinese’s lack of transparency ends and the international community’s unwillingness to press the regime for accountability begins. The probe did not help the perception that the WHO is effectively operating at the behest of the Communist Chinese.

The WHO has a track record of being a pro-China organization due in part to the Chinese Communist Party (CCP) reportedly installing its director, Dr. Tedros Adhanom Ghebreyes. The Marxist-Leninist connected malaria expert has consistently backed China since he took over the group. As a July report from China Task Force Chairman Rep. Michael McCaul, advocating for more transparency and accountability at the United Nations, put it:

Those who followed Tedros’ election at the WHO weren’t surprised at his actions. After all, it was the CCP, among others, who strongly advocated for him – after they invested $13.3 billion into Tedros’ home country of Ethiopia during his time as foreign minister.

To put this in perspective, during the 2003 SARS outbreak, then-WHO Director General Gro Harlem Brundtland spoke publicly against the CCP for withholding information and lying to the world. Compare that to Tedros’ consistent glowing praise of the CCP during the COVID-19 outbreak – even though, as the AP reports, the WHO knew the CCP was withholding vital information. While there are some who want to give Tedros the benefit of the doubt regarding the CCP’s influence over his decisions, his incompetent management of the COVID-19 response should be enough for a swift dismissal.

The Chinese covered up a virus that killed millions globally. Over a year later, we are still seeking accountability for China’s deadly inaction, thanks in no small part to the dysfunctional and corrupt WHO.