Hunter Biden Reveals He Smoked Parmesan Cheese Instead of Crack, But That’s Not the Really Disturbing Part 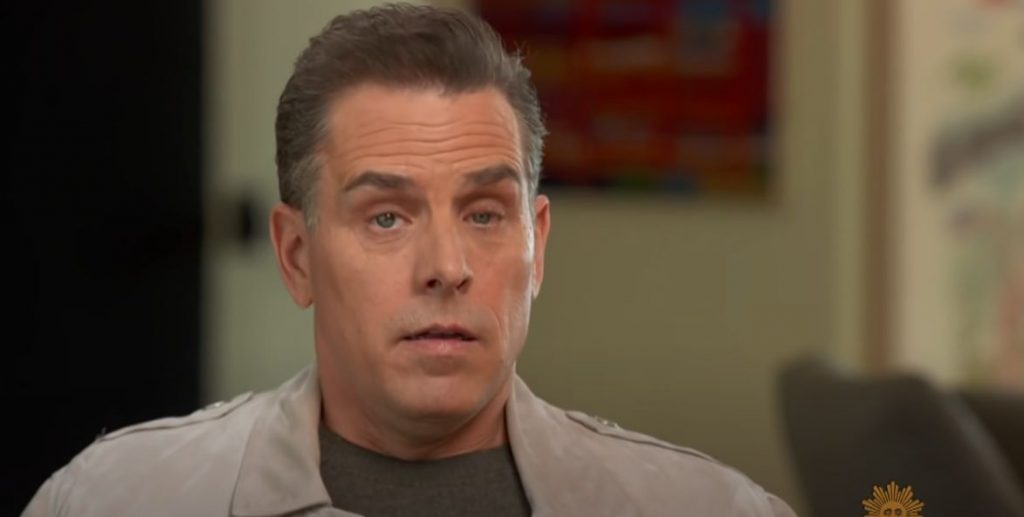 Hunter Biden’s illicit activities were the focus of a CBS interview on Sunday Morning. While the interview concentrated primarily on his scurrilous past, it did delve into he matter of Hunter Biden’s laptop and a DOJ-led investigation into his taxes.

As has become standard practice in the dishonest media, the Hunter Biden interview glosses over the tougher questions and let the president’s son shape his own narrative about his battle with drug addiction in relation to his new book, “Beautiful Things.” The book itself has been panned as a “trite and clichéd redemption narrative” that “whitewashes” serious ethical issues.

The pressing questions about how President Joe Biden’s son had profited off of his father’s name due to multi-million dollar deals with state-controlled Chinese companies and the Ukrainian gas giant Burisma Holdings are largely left unanswered. The Biden lapdog media appear to be wholly uninterested in getting to the heart of the matter.

One of the questions that came up in the interview: Hunter Biden — is he on crack? No, but has been known to smoke parmesan cheese. Literally. As in burning and inhaling it.

“You wake up some mornings — I shouldn’t even say some mornings because you slept 15 minutes at a time and be looking for crack and to smoke whatever was there?” CBS reporter Tracy Smith asked.

“I spent more time on my hands and knees picking through rugs smoking anything that resembled crack cocaine,” Hunter said. “I probably smoked more Parmesan cheese than anyone – than anyone you know, Tracy.”

“Because there would will be crumbs mixed in?” Smith asked.

“Yeah, I went one time for 13 days without sleeping, and smoking crack, and drinking vodka exclusively throughout that entire time,” he replied.

“There’s a current Department of Justice investigation into your finances,” Smith asked without providing much context about their scandalous import. “What is it about? Can you say anything?”

“I can’t. But I can say this, is I’m cooperating completely,” he replied. “And I am absolutely certain, 100% certain that at the end of the investigation, that I will be cleared of any wrongdoing.”

The “process” when it comes to any Democrat-connected public figure assuredly means there is a slim chance of public accountability, thanks in part to media negligence.

The issue of Hunter Biden’s laptop did come up. It was a hot topic in the 2020 campaign, because it presented evidence of illegal and salacious activity, such as prostitution and drug usage.

The New York Post had obtained a copy of the laptop hard drive’s contents, as did then-Trump attorney Rudy Giuliani. The NY Post’s story was unjustifiably censored on Twitter, which was beneficial to the Biden election campaign.

When asked if he had dropped of his laptop at a Delaware repair shop in 2019, Biden gave a murky answer that is tantamount to a non-denial denial.

“For real, I don’t know,” Biden claimed, then added it “certainly” could be his.

“And you did not drop off a laptop to be repaired in Delaware?” Smith asked.

This is the Russia hoax mutated into a new form: It has become a convenient excuse and denial for Democrats caught in any illicit activity. News media outlets, such as Politico, had earlier and baselessly asserted that the laptop story was part of a Russian disinformation campaign.

John Paul Mac Isaac, the store owner where the laptop was dropped off, has denied any connection to Russian intelligence.

The issue of Hunter Biden’s laptop recently became more important because it leads to evidence that he may have recently committed a felony: Lying on a federal firearms transaction record form.

Hunter Biden’s Firearms Transaction Record was obtained by Politico. It showed a receipt for the gun that was dated October 12, 2018.

On the FTR record, Hunter Biden responded ‘no’ to the statement on “Are you an unlawful user of, or addicted to, marijuana or any depressant, stimulant, narcotic drug, or any other controlled substance?”

The following is Hunter Biden’s 4473 form: 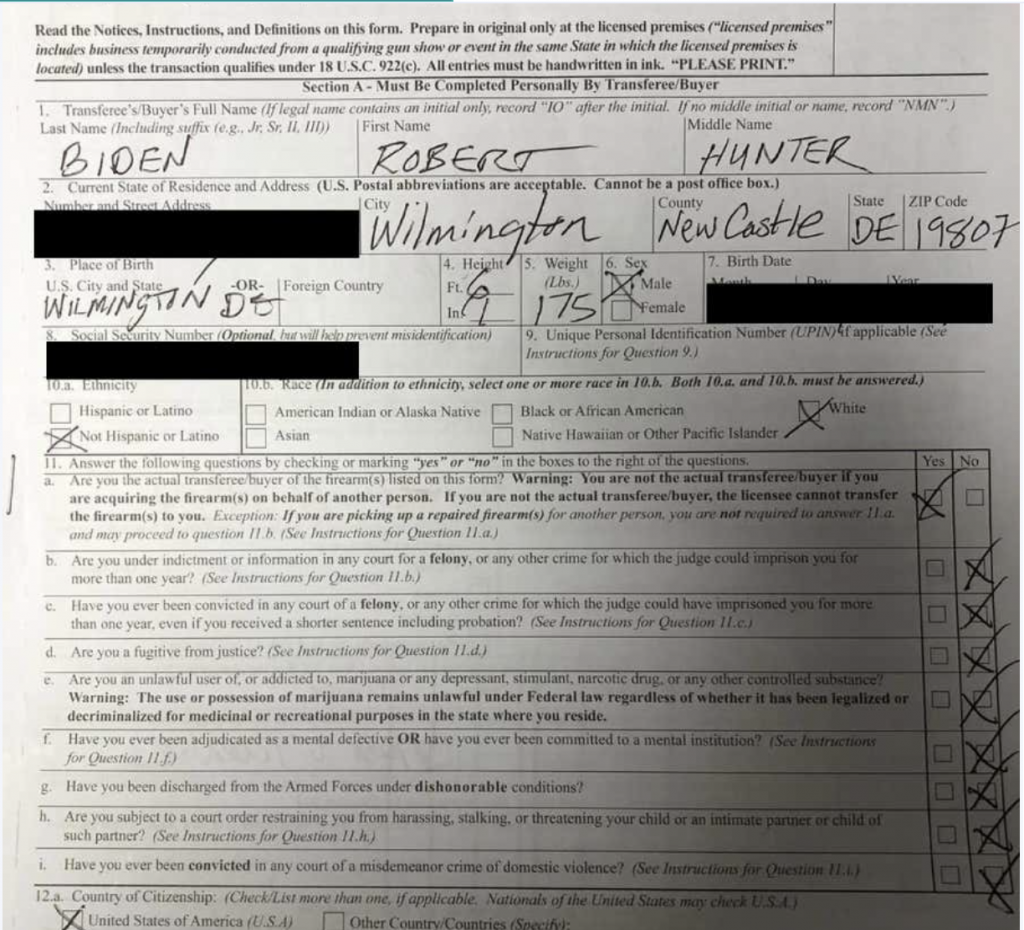 Hunter Biden failed a drug test and was discharged from the Navy, although it wasn’t classified as “dishonorable.” Lying on the federal document is a felony, punishable by up to ten years in prison.

“Hunter, who was kicked out of the Navy Reserve after failing a drug test, grappled with substance abuse for years – and after Beau died of brain cancer in 2015, Hunter said he started binge-drinking vodka so heavily that his father intervened,” CBS News notes.

“He came to my apartment one time,” Hunter recalled. “And this was when he was still in office as vice president, and so he kinda ditched his Secret Service, figured out a way to get over to the house. And I said, ‘What are you doin’ here?’ He said, ‘Honey, what are you doing?’ I said, ‘Dad, I’m fine.’ He said, ‘You’re not fine.'”

During the incident with his misplaced, potentially illegally obtained firearm in 2018, the Secret Service responded to clean up the mess, although Hunter Biden was not entitled to such protection at the time.

An NPR interview published on Monday morning did delve superficially into Hunter Biden’s work at Burisma. It again lets Biden off the hook by refusing to pin him down on a serious question.

“May I ask how much you got paid?” the NPR host asked politely.

Joe Biden’s son appears to have gotten special treatment by his father throughout the years, in addition to corrupt businessmen and the U.S. legal system. Judging by such superficial interviews, the special treatment continues in the mainstream media.