Poor Gwen Berry. The hammer-throwing Olympian who was psychologically assaulted by the national anthem for the country she is slated to represent has quite the history.

By that, it doesn’t mean she has a history of setting world records or is expected to be a favorite at the upcoming Olympics. She placed third at the Oregon trials where she now infamously turned her back on her nation.

Berry was busted with the inconvenient fact that the national anthem had been pre-scheduled to play at 5:20 p.m. She had plenty to say about the anthem.

“They said they were going to play it before we walked out, then they played it when we were out there,” Berry continued. “But I don’t really want to talk about the anthem because that’s not important. The anthem doesn’t speak for me. It never has.”

Berry later claimed that she didn’t mean to disrespect her country.

“I never said I hated this country! People try to put words in my mouth but they can’t. That’s why I speak out. I LOVE MY PEOPLE,” she said in a tweet.

While Republicans wanted Gwen Berry removed from the Olympic team for her disgraceful display, Biden supported her right to ‘peacefully protest.’

“I know [Biden] is incredibly proud to be an American and has great respect for the anthem and all that it represents,” White House Jen Psaki said. “He would also say that part of that pride in our country means recognizing there are moments where we, as a country, haven’t lived up to our highest ideals, and means respecting the right of people granted in the Constitution to peacefully protest.”

Gwen Berry’s burst of anti-patriotism appears to be a recent phenomenon, however. The world class athlete once had no problem with the flag. 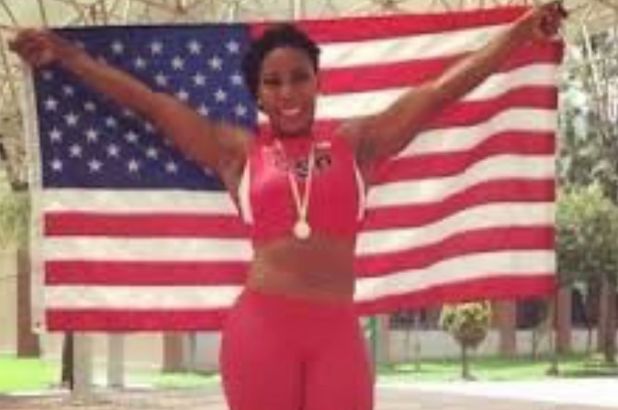 Her posing while holding the flag was dug up from her own blog. Whoops.

But Berry’s hypocrisy doesn’t start and end with her public attitude towards America. No, the would-be Woke icon has quite the history of making racially insensitive jokes, including those involving rape.

Let’s see what Internet sleuths at the Daily Mail have unearthed. Oh, my.

“S/O [shout-out] to all the females that’s gone get drunk, get recked by 4 dudes, then cry rape this weekend,” she continued.

“Mexicans just don’t care about ppl,” she quoted someone as tweeting and laughed.

“Just saw this gurl wearing heels with white socks!! What the Hell..#chineseppl always try to start new trends..smh..ggguuurrrllll,” she wrote.

“This lil white boy being bad as hell!! I would smack his *** then stomp him!! Smh #whitepplKids hella disrespectful,” she tweeted in June 2011.

“White people are sooo retarded when they are drunk,” Berry wrote in an insulting two-fer tweet.

“#BasketballWives is proof that white ppl run they got damn mouths too much n they nosey as hell n they start drama btw crazy blk b&^%^%,”she tweeted in July 2011.

Gwen Berry is quite the moral authority that Americans should look up to when assessing whether or not they should respect their national anthem.

Trump Makes a ‘Significant’ Announcement Ahead of His Sarasota, Florida Rally Tonight