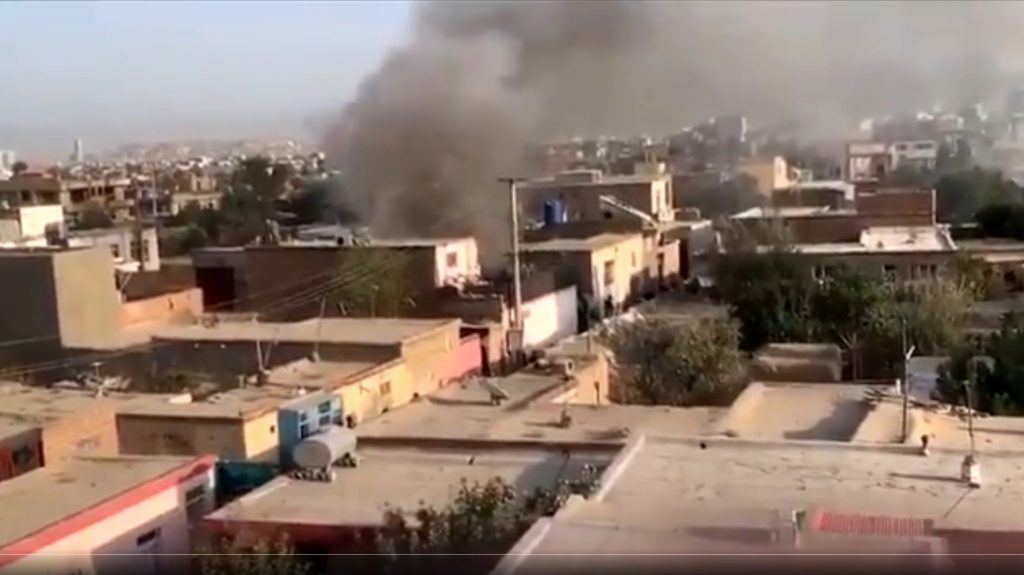 One day after President Biden announced that more terror attacks were “highly likely” in the next 24-36 hours, as well as retaliation, there has been an explosion reported in Kabul, Afghanistan.

“Local media in Afghanistan reports there’s been an explosion in Kabul,” Alex Salvi reported. “Witnesses say the blast is from a rocket that struck a residential building.”

The aftermath of the blast was captured on video.

It was also reportedly captured by an RT correspondent.

Explosions in Kabul: our colleagues are saying there has apparently been a rocket attack near a road leading to Kabul airport.

We’ve been told about several rocket blasts, but can’t confirm this yet pic.twitter.com/ySfvDi6Ai5

It is unclear at this moment if the attack was a terrorist strike or U.S. retaliation for killing 13 U.S. Marines in suicide bombings near Kabul airport on Thursday. One thing is for certain: It represents an escalation of the volatile situation in the war-torn country.

Onn Saturday, Biden issued an announcement that more terrorist attacks are “highly likely” in the next 24-36 hours. The president gave the update in a White House statement.

“This morning, I met with my national security team in Washington and my commanders in the field. We discussed the strike that U.S. forces took last night against the terrorist group ISIS-K in Afghanistan,” Biden’s statement said. “I said we would go after the group responsible for the attack on our troops and innocent civilians in Kabul, and we have,” he claimed.

“This strike was not the last,” he said. “We will continue to hunt down any person involved in that heinous attack and make them pay. Whenever anyone seeks to harm the United States or attack our troops, we will respond. That will never be in doubt. I thanked General McKenzie for his leadership of that mission, and for his commitment to the safety of our troops in Afghanistan.”

“The situation on the ground continues to be extremely dangerous, and the threat of terrorist attacks on the airport remains high,” he continued. “Our commanders informed me that an attack is highly likely in the next 24-36 hours.”

“Despite the treacherous situation in Kabul, we are continuing to evacuate civilians,” Biden added. “Yesterday, we brought out another 6,800 people, including hundreds of Americans. And today, we discussed the ongoing preparations to help people continue to leave Afghanistan after our military departs.”

However, there are multiple reports that Americans are being blocked from getting through the gates at Kabul airport. There are also reports that humanitarian flights have been stopped or are being obstructed in the region.