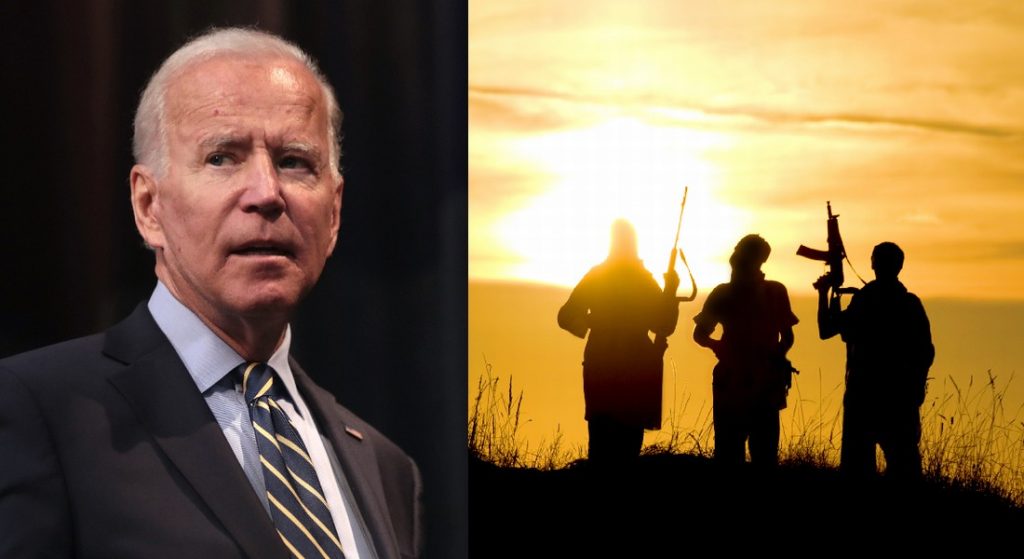 The Biden administration has shattered the peacetime record that began with the Trump presidency in 2017. The president authorized a “precision” airstrike that reportedly killed an unconfirmed 22 pro-Iranian militants and risks U.S. war in the region with Syria and Iran.

The BBC News has provided the updated casualty estimate.

The Syrian Observatory for Human Rights, a UK-based monitoring group, said the US attack had killed at least 22 fighters from the Popular Mobilisation Forces, an Iraqi umbrella group of mostly Shia paramilitaries that includes Kataib Hezbollah.

Amid the flurry of breaking news reports on the Biden-authorized airstrike on Iranian militants in eastern Syria, there was one issued by the New York Times that seems to have justified the reprisal: A U.S. military servicemember had been killed.

That turned out to be incorrect, however, as the NY Times clarified in a correction late Thursday night:

Correction: U.S. airstrikes on Iranian-backed militias were over an attack that killed a contractor and injured, not killed, a U.S. service member.

The airstrikes reportedly hit three transport vehicles carrying munitions, a SOHR spokesperson told AFP. The Pentagon claims that the attack is a reprisal for a militia attack in mid-February that killed a Filipino civilian contractor and injured others, including a Louisiana National Guard soldier and four American contractors.

” A rocket attack on the airport in the northern Iraqi city of Erbil… killed a civilian contractor with the American-led military coalition and wounded six others, including a U.S. service member, according to a coalition spokesman,” the Times reported.

The deadly assault represents a military escalation in Syria, which is in the throes of a civil war among rival militia groups and terrorist organizations. The Pentagon claims the attack was a ‘proportionate’ one.

“This proportionate military response was conducted together with diplomatic measures, including consultation with coalition partners,” he added. “The operation sends an unambiguous message: President Biden will act to protect American and coalition personnel.”

The Iranians and the United States did engage in a military exchange under the Trump administration, when the president in early 2020 ordered the assassination of Qassim Soleimani by drone strike in retaliation for killing American troops.

“We took action last night to stop a war. We did not take action to start a war,” Trump said in a statement.

Soleimani is credited with the killing of over 600 U.S. soldiers in Iraq.

“General Soleimani and his Quds Force were responsible for the deaths of hundreds of American and coalition service members and the wounding of thousands more,” the Pentagon said. “He had orchestrated attacks on coalition bases in Iraq over the last several months — including the attack on December 27th — culminating in the death and wounding of additional American and Iraqi personnel. General Soleimani also approved the attacks on the U.S. Embassy in Baghdad [in late December 2019].”

The Iranians appear intent on pressing ahead with their brinksmanship in the aftermath of the Soleimani assassination.

“Iran has made clear that it intends to retaliate further for the American drone strike in Baghdad in January 2020 that killed a top Iranian general, Qassim Suleimani, and a senior Iraqi security official,” the Times earlier reported. “Days after that strike, the Iranian government launched missile attacks against U.S. forces at the Ain al Assad air base in Iraq’s Anbar Province, wounding more than 100 troops.”

In January, the Biden administration lifted the “terrorist” designation for the Iranian backed Houthis in war-torn Yemen. Such appeasement of Iran has only emboldened it to ramp up its nuclear program and is now only “weeks away” from weapons grade material.

The tensions with Iran continue to build regardless of the Biden airstrike. The Obama administration, which former vice president and current president Biden played a prominent foreign policy role in, put the U.S. on a course to conflict by enabling and emboldening the Iranian terror regime.

The Biden administration early on signaled weakness with its willingness to go back to the Iranian nuclear deal that had been scrapped by Trump. The JCPOA nuclear deal was an Obama era end-around the Senate, which the Iranians nevertheless flagrantly violated.

Biden’s choice for Special Envoy to Iran, Rob Malley, was a key architect of the JCPOA and a former Mideast adviser to Obama. The Obama administration also quietly shipped $400 million in cash to the Iranians as “ransom” for hostages as part of a transfer of $1.7 billion to Iran “made entirely in cash.”

Syria itself is torn apart by civil war after a decade of infighting. The Syrian strongman Bashar al-Assad appears to have prevailed over his internal enemies along with a number of “red line” confrontations with the United States going back to the Obama administration.

Senator Rand Paul has condemned the Biden administration’s attack, which risks entering the U.S. into another regional war.

“[President Biden] dragging the US into Syria’s civil war is a huge mistake,” he tweeted. “I strongly condemn this foolish military adventurism.”

“I condemn meddling in Syria’s civil war. I also condemn attacking a sovereign nation without authority. What authority does [President Biden] have to strike Syria? Perhaps someone should ask his [Press Secretary] today?” he added.

“The defense industry, permanent D.C., now have their man back in the White House,” Carlson said. “That didn’t take long. For four years they longed, more than maybe anything, for more pointless conflict in the Middle East. And just 36 days in, now they have it.”