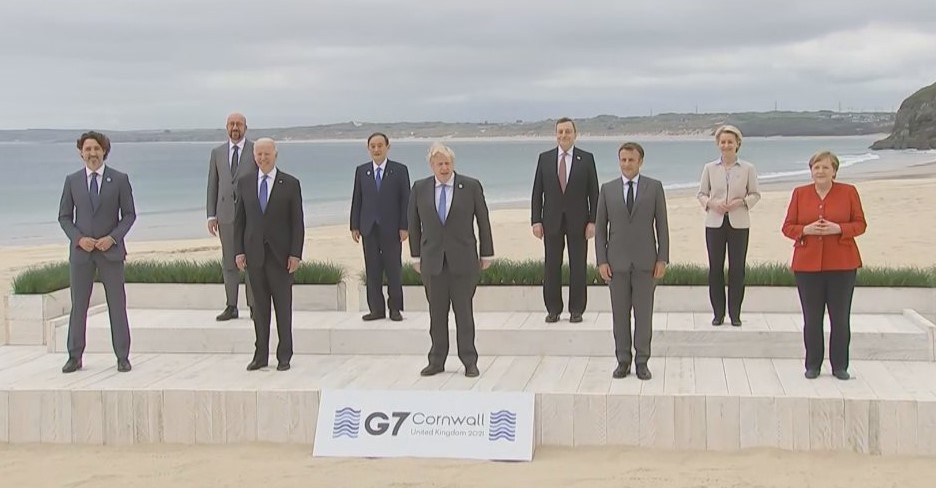 On Friday, G7 and European Union leaders posed for what the lapdog press refers to as a “family photo,” a phrase intended to endear the world leaders to the lowly masses.

Despite being fully vaccinated, the G7 and European Union leaders stood six feet apart, looking stoic and rigid on the beach platform. This spurred a few sarcastic jokes, but there is a deeper reason the photo looks “odd.”

The awkward photo kicked off a number of sarcastic jokes.

this reboot of The Avengers looks wild

Aliens, if you're listening, they're ready to be beamed up now.👽🛸🔻https://t.co/9Id3WOZHaF

The most important thing about this “family photo” is that the optics are completely contrived for COVID theater. Keep with this for a moment.

The latter was taken after the beginning of the COVID pandemic. There is a remarkable contrast between the Trump administration and Biden administration optics.

The Trump administration wasn’t trying to scare the public into adopting unnecessary measures. There weren’t the ‘games’ being played. This is a big difference with the Biden administration, which needs constant “optics” to keep the American public in a constant state of fear. Virtue-signaling hides the Democrats’ disastrous results, such as soaring inflation and disappointing unemployment numbers.

So, here is how the G-7 and European Union leaders behaved in 2021 when they weren’t virtue-signaling for the public in their “family photo.”

“Everybody in the water,” Biden joked to his fellow leaders at the G7 family photo on the oceanfront in Carbis Bay, England.

Macron and Biden walked shoulder to shoulder, chatting, an arm draped around each other’s back. pic.twitter.com/CTpwa8gCjU

“Macron and Biden walked shoulder to shoulder, chatting, an arm draped around each other’s back,” Jennifer Jacobs reported.

But this isn’t the only give away that the leaders don’t believe in their own social policies. Here are photos of Biden and other leaders doing the dreaded “elbow bump.”

Here is a photo of Biden and Boris Johnson.

But as explained in a previous post, Biden violated social distancing with military officers after departing Air Force One on the way to the G7 summit. He even shook hands.

In a conference call with world leaders in April, Biden was also the only world leader wearing a mask during the call. This is extremely embarrassing stuff, which should undermine public confidence and Americans’ ability to trust their elected leaders. These small ‘tells’ reveal a lot about what our politicians really believe and should not be ignored.