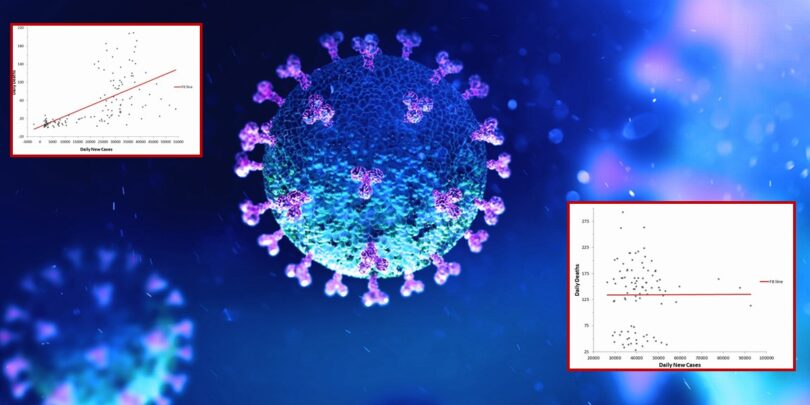 The Omicron variant is far less deadly than earlier variants. It might even be comparable to the seasonal flu, according to new reports.

“Omicron could be even less deadly than flu, scientists believe in a boost to hopes that the worst of the pandemic is over,” the Daily Mail reported. “Some experts have always maintained that the coronavirus would eventually morph into a seasonal cold-like virus as the world develops immunity through vaccines and natural infection. But the emergence of the highly-mutated Omicron variant appears to have sped the process up.”

“Covid killed one in 33 people who tested positive at the peak of the devastating second wave last January, compared to just one in 670 now,” the Mail noted. “But experts believe the figure could be even lower because of Omicron.” 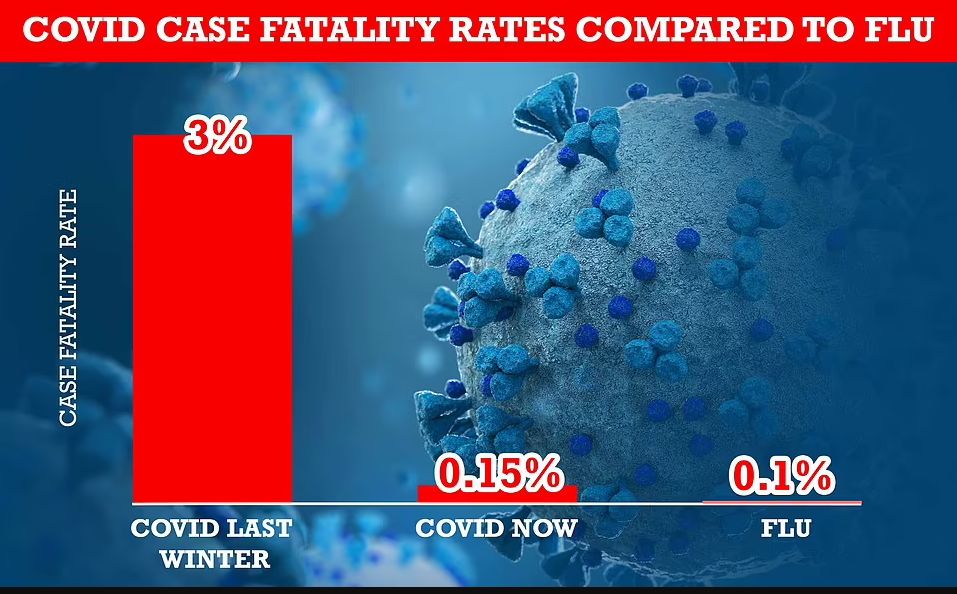 “The case fatality rate — the proportion of confirmed infections that end in death — for seasonal influenza is 0.1, the equivalent of one in 1,000,” the Mail added.

Just like in the United States, the Covid infection fatality rate drops precipitously by age group from elderly to young. The risk for the youngest groups? Infinitesimal. 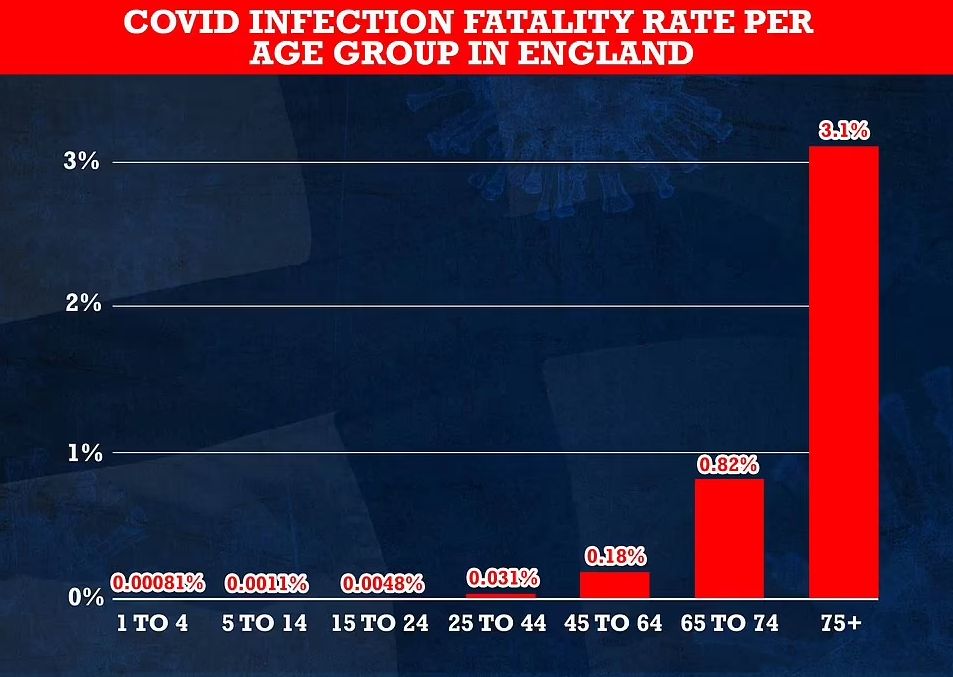 The Covid-related death rates for the youngest people are much lower than many everyday activities, such as being driven to school or swimming. It is also far lower than suicide, heart disease and cancer.

“No accurate infection-fatality rate (IFR), which is always just a fraction of the CFR because it reflects deaths among everyone who catches the virus, has yet been published for Delta,” the Mail notes.

“But UK Government advisers estimated the overall figure stood at around 0.25 per cent before Omicron burst onto the scene, down from highs of around 1.5 per cent,” the article continued.

“If Omicron is 99 per cent less lethal than Delta, it suggests the current IFR could be as low as 0.0025 per cent, the equivalent of one in 40,000, although experts say this is unlikely,” the Mail added. “Instead, the Washington modelling estimates the figure actually sits in the region of 0.07 per cent, meaning approximately one in 1,430 people who get infected will succumb to the illness.”

“Leading researchers estimate flu’s IFR to sit between 0.01 and 0.05 per cent but argue comparing rates for the two illnesses is complicated,” the Mail reported.

A chart in the The Washington Post shows that while there has been a ‘tsunami’ of Omicron cases in the United States, the hospitalization has bent up slightly and the death rate has plateaued. 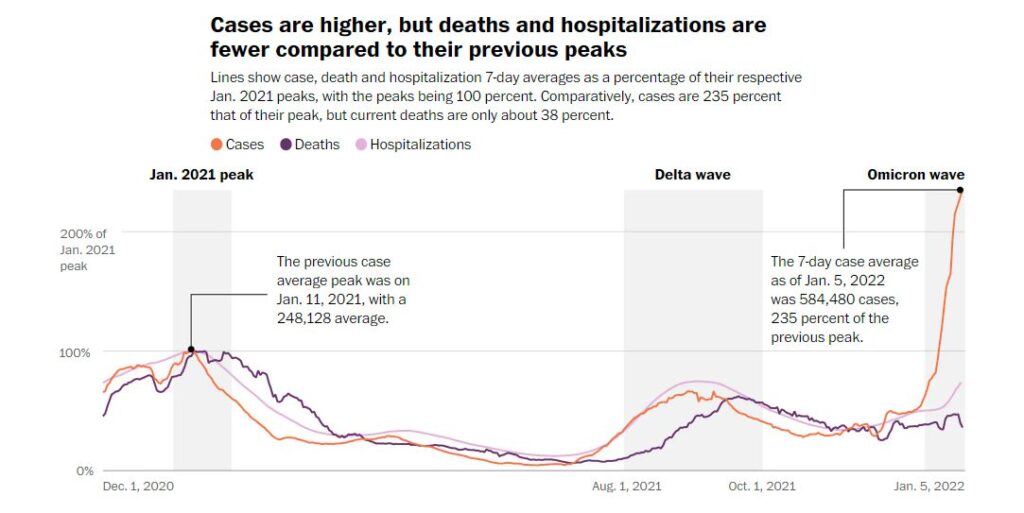 The Post showed that South Africa, where the first Omicron surge was detected, saw a dramatic spike in reported cases followed by a modest increase in the death rate. 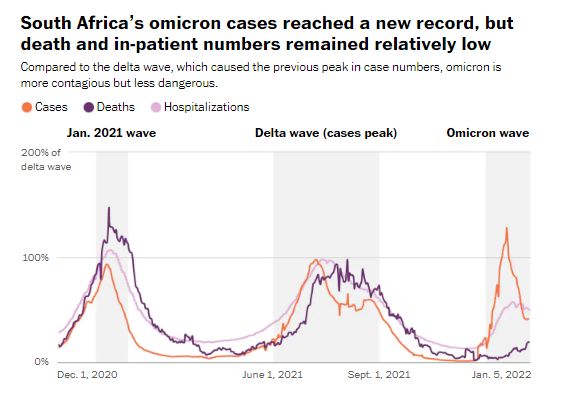 The Post tried to explain Omicron fizzling out in South Africa without a major surge in death rates by pointing to the country’s median age of 28 years old, which is ten years lower than in the United States. Furthermore, a South African doctor told the Washington Post that more than 70% of the population may have natural immunity from prior infections.

But it should be noted that South Africa has a “fully vaccinated” rate of just 27%, which is very low compared to the United States (62%) and the United Kingdom (71%). This suggests that the Omicron variant is “generally mild” for both the vaccinated and unvaccinated, as the South African doctor who discovered the first Omicron patient noted, while prior infection from Omicron appears to provide some natural immunity to other variants, such as Delta.

Omicron, indeed, seems to be “different.” Yet assessing its actual deadliness is not as straightforward as one might be led to believe.

A December article in Stat shows that the relationship between cases and deaths are evaporating with this Omicron wave.

“But there’s something else different this time around, at least in the U.K.: the statistical relationship between Covid-19 cases and deaths appears to have broken down with Omicron,” Stat notes.

“Looking at daily death rates in the U.K. from May 15 — essentially from the point at which the Delta wave began — to Sept. 15, there is a highly statistically significant relationship between daily new cases and deaths,” Stat continues. “In short, case rates accurately predict death rates.” 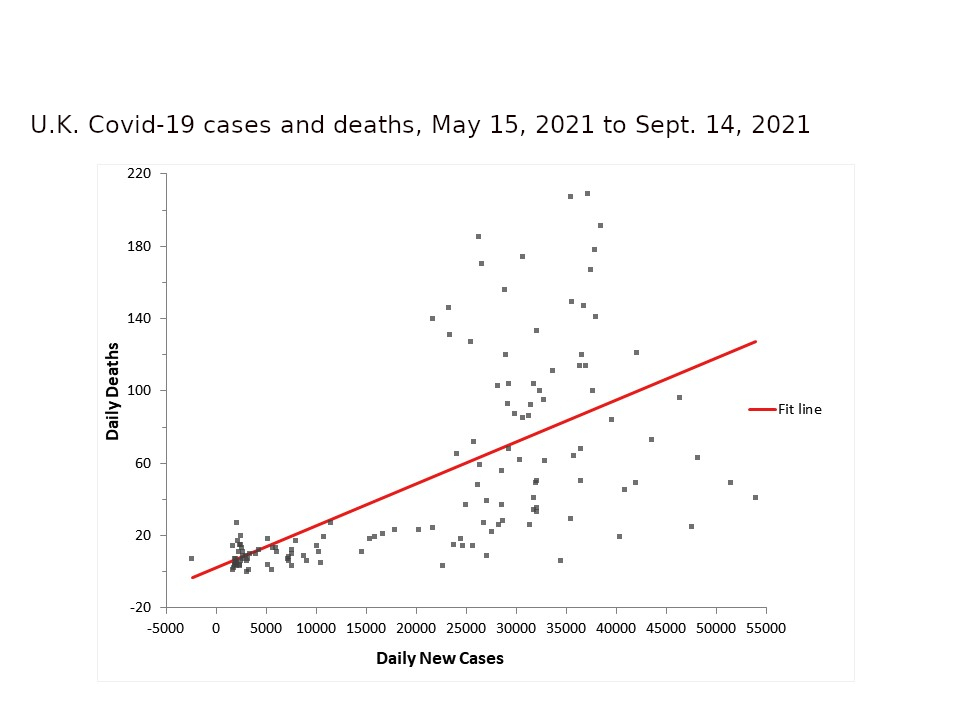 But here is what we are seeing with the decline of Delta and the surge of Omicron up to mid-December: That’s right, a flat line. 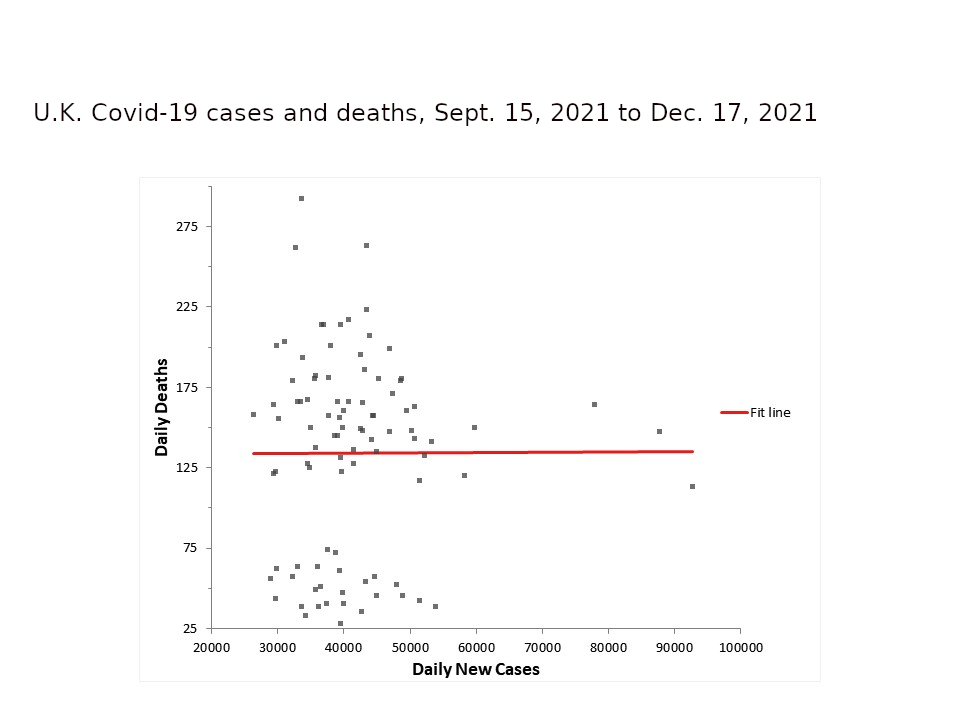 “But beginning the analysis on Sept. 15, coinciding with flattening of the Delta curve and the onset of Omicron, shows no statistical relationship between Covid-19 case rates and deaths,” the article adds.

So, how does the U.K.’s and South African experience compare to the U.S.’s? The CDC very recently reported that 95% of all Covid cases in the U.S. are Omicron. The U.S. may have already be nearing a case peak for Omicron and may soon decline.

By comparing the state-level data from the “wild” variant peak to the present near-peak of Omicron, one gets a clear picture of how much less deadly this newer variant seems to be. 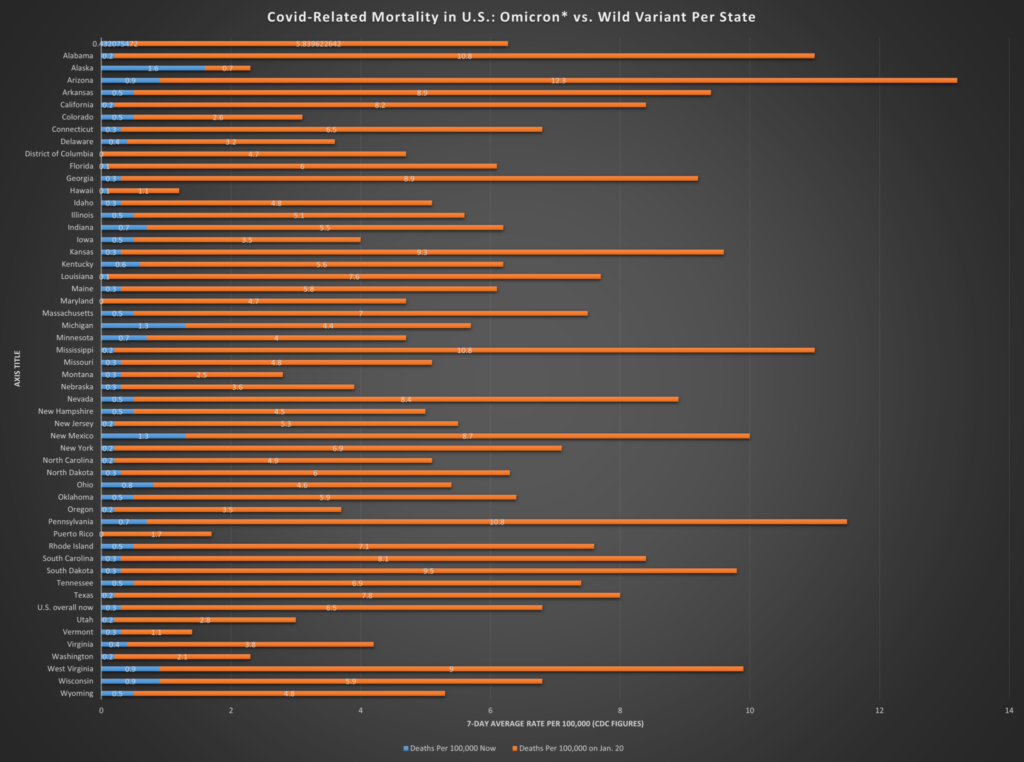 If we compare the Omicron-dominant death rate to the peak Delta death rate in mid-September, we get a similar picture. 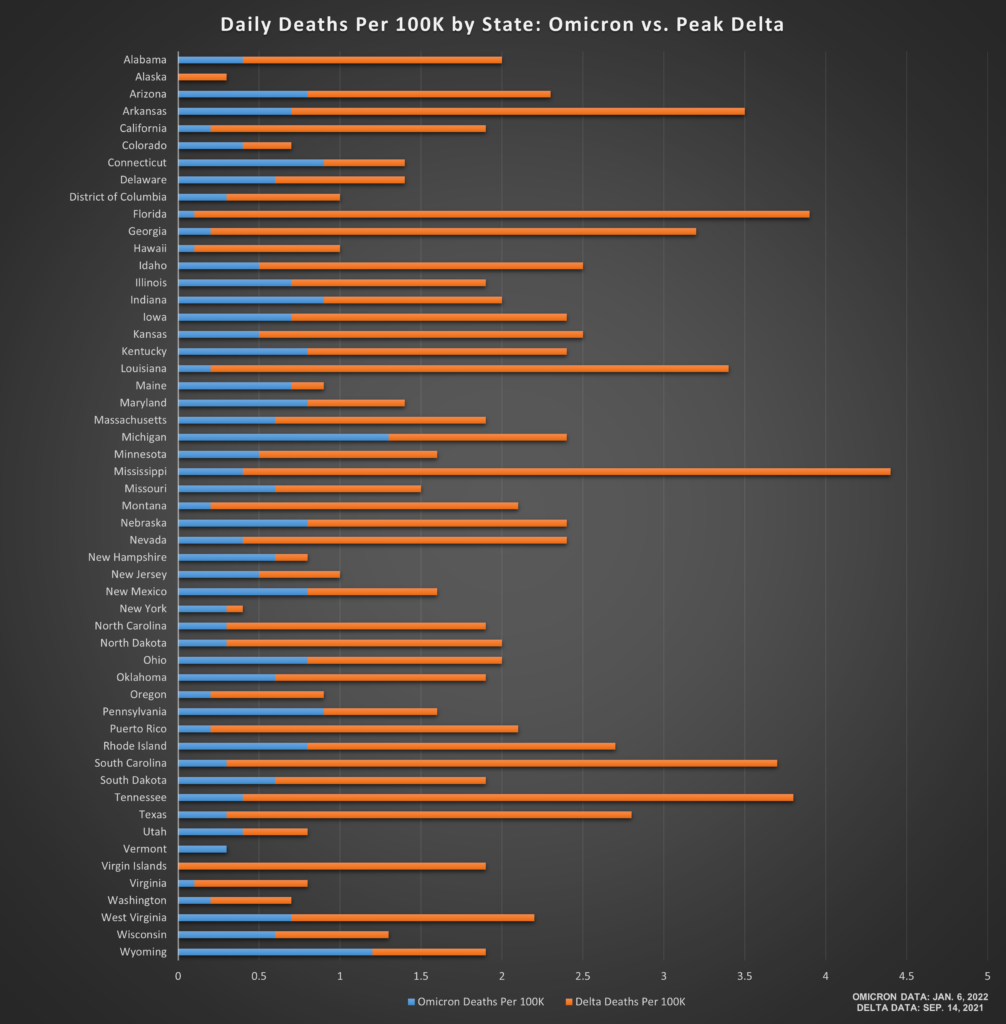 The Covid data suggest that the Omicron-prevalent death rate (0.42 deaths per 100,000) is under a third less deadly than the Delta wave (1.36 deaths per 100,000). So, even by worst case scenario, and taking the Covid-related mortality data at face value, the Omicron variant is not the same animal that the American people have been dealing with when it comes to the “wild” variant and the “Delta” variant.

What Americans are experiencing now is a classic case of institutional inertia. The real-world conditions have changed, but the government is failing to keep up with them.