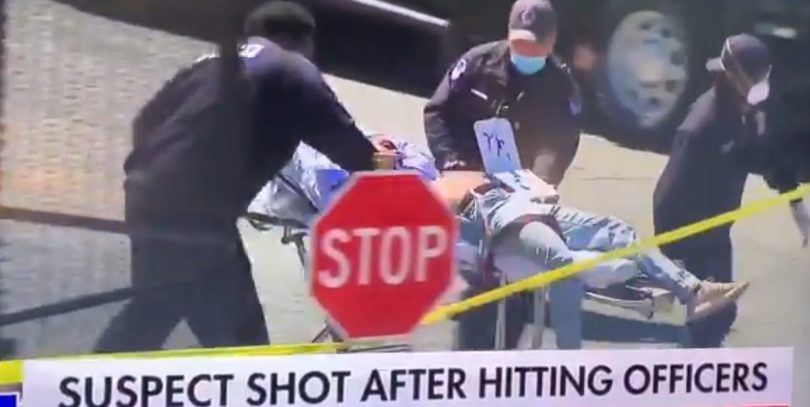 Multiple Capitol police officers have been injured according to breaking reports. And graphic video of the suspect was shown on live television that will go even further to impact the media’s narrative about the event.

BREAKING – Multiple US Capitol police officers have been shot according to the radio. More police units rush to the complex.pic.twitter.com/t2hmyh0aYP

[The U.S. Capitol Police] is “responding to the North Barricade vehicle access point along Independence Avenue for reports someone rammed a vehicle into two USCP officers,” the Capitol Police reported.

“A suspect is in custody,” the police report added. “Both officers are injured. All three have been transported to the hospital.”

The Capitol Police corrected the report to note it was Constitution Avenue. The suspect was reported to have a knife.

The guy who just rammed into two Capitol Police officers got out of the vehicle brandishing a knife. Police then shot him.

Live footage of the suspect being wheeled out of the crime scene on a stretcher was air on Fox News while Chad Pergram reported.

The visual ID should majorly impact the media’s coverage of the Capitol police shooting.

The suspect is now reported as fatally wounded.

The following is video and on-scene reportage:

🚨🚨A helicopter just landed on the east front of the Capitol. I’ve never seen anything like this before. ever. pic.twitter.com/LxV0mywRSe

The U.S. Capitol complex has been placed in lockdown. Congress is not currently in session.

In early March, it was announced that a National Guard presence would remain in D.C. for ten more weeks, citing unconfirmed reports about a continuing threat of “far-right extremists.” There were no reports of National Guard troops on the scene to respond to today’s attack.