President Biden’s trip to Rome to meet the Pope ahead of the G20 was a bit messier than expected, according to unofficial media accounts. The 78-year-old president met with the Pope before heading off to meet with Italian Prime Minister Draghi and then President of France Emmanuel Macron on Friday. He then attended the G20 summit on Saturday, and finally, he is slated to attend the COP26 climate summit in Glasgow, Scotland on Sunday.

On Thursday, the Vatican created a stir by suddenly canceling the live broadcast of President Biden meeting with Pope Francis without providing an explanation. The Holy See has implemented a restrictive media environment, including bans on independent media access in certain areas of the Vatican. As the Washington Post reported on Thursday, the live broadcast was severely restricted.

This is relevant because the limited access for the media that the Vatican has imposed, attributing it to the pandemic, has created an atmosphere where rumors can go flying. The Washington Post account is worth considering before delving into whether or not a Biden ‘bathroom accident’ became an issue at the meeting with the Pope.

The live broadcast of Biden’s Friday visit was trimmed to cover just the arrival of the president’s motorcade in the courtyard of the Apostolic Palace. Vatican spokesman Matteo Bruni said the revised plan reflected the “normal procedure” established during the coronavirus pandemic for all visiting heads of state or government.

That protocol also has meant an 18-month ban on any independent media being in the room for the beginning and end of the audience, as would normally be the case for a visiting head of state.

Cancelled was the live coverage of Biden actually greeting Francis in the palace Throne Room, as well as the live footage of the two men sitting down to begin their private talks in Francis’ library, at which time the cameras would have stopped running.

All jokes about the ‘Throne Room’ aside, it is significant that the change of plans for Biden’s trip came suddenly and without explanation.

“The Vatican said it would provide edited footage of the encounter after the fact to accredited media,” the WaPo report added, significantly. “Bruni didn’t say why the Vatican had originally announced fuller live coverage only to dial it back on the eve of the visit.”

On Friday, the president actually met with the Pope. The edited footage of the meeting between the two figures was relayed to the media and can be scrutinized below:

There was additional footage released earlier of Biden rambling on about African American baseball players and other pressing matters:

The official photos of President Biden’s meeting with the Pope on Friday were released. Biden’s stiff posture has fueled speculation about possible incontinence. 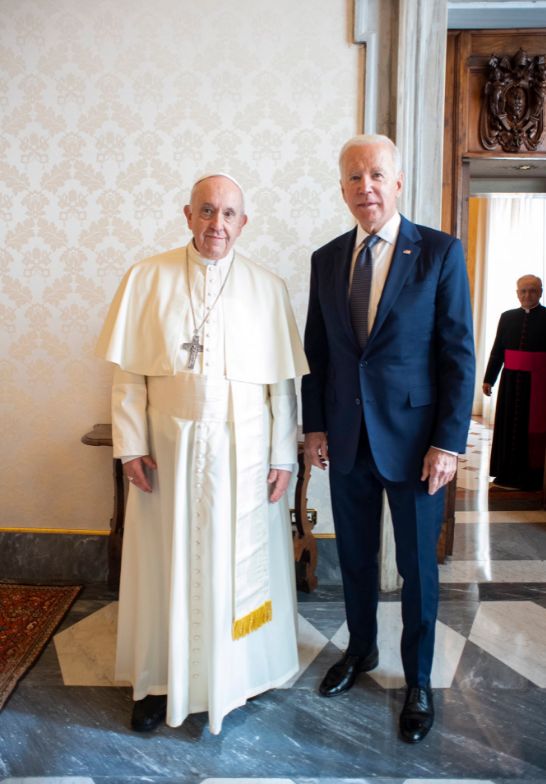 The Pope’s expressions throughout the meeting convey a level of concern. 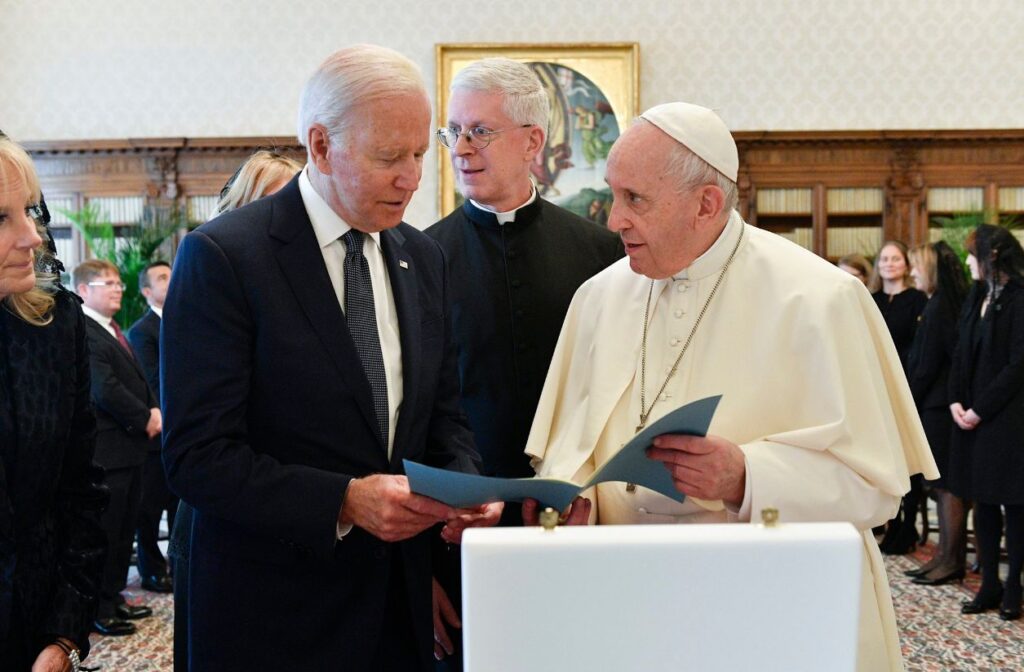 President Biden and the Pope sitting on white chairs at the Vatican. 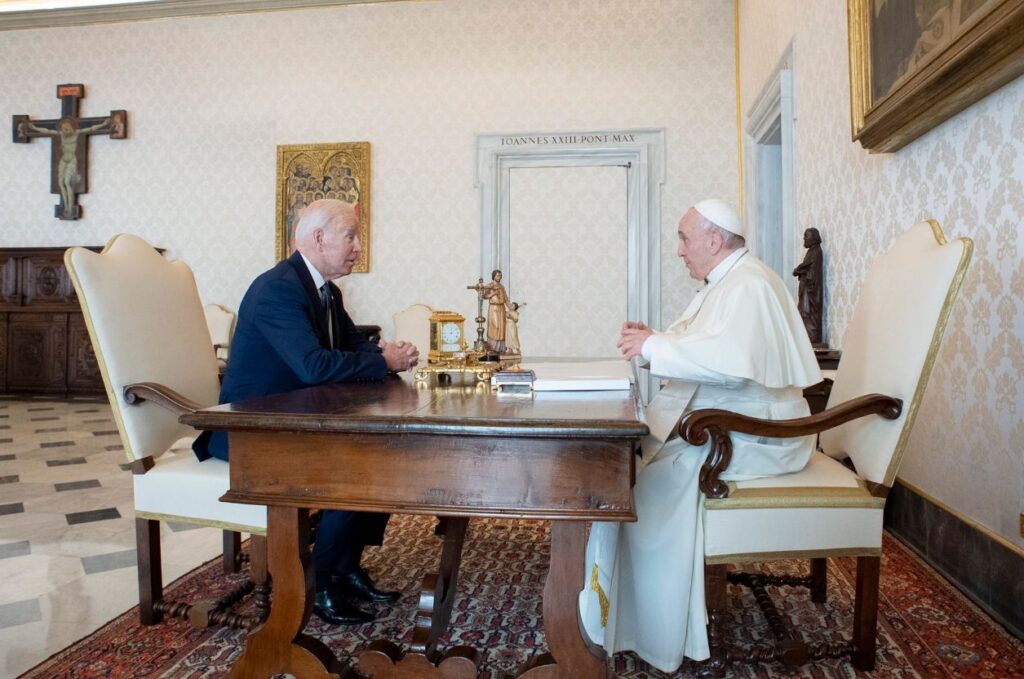 A shot from further away with President Biden, First Lady Jill Biden, the Pope and various members of Biden’s entourage, including Secretary of State Antony Blinken. Biden’s eyes happen to be closed in the photo. 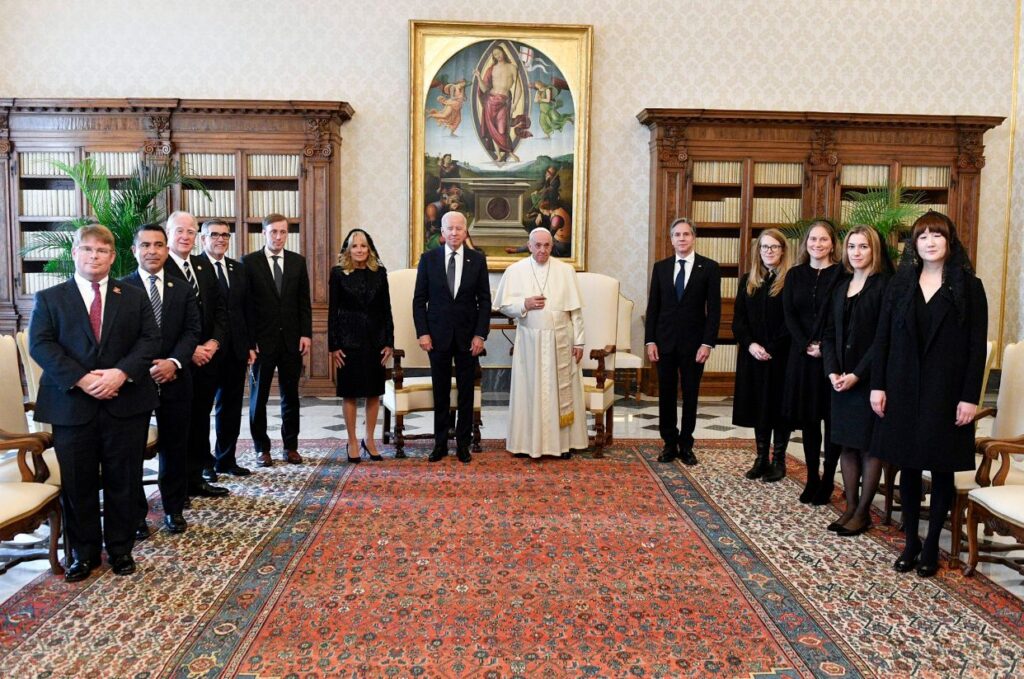 A closer look at Biden alongside Pope Francis. 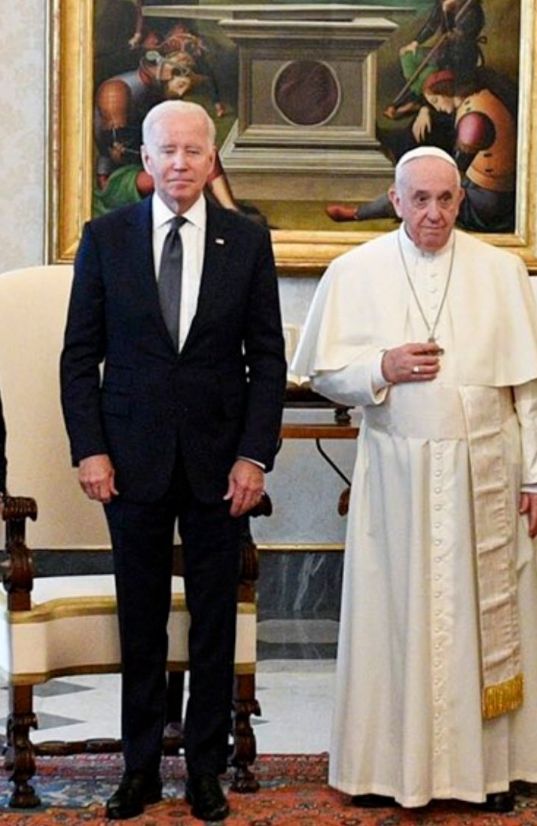 Biden’s visit with the Pope ran longer than expected, which fueled rumors that something unexpected may have arisen. A CBS News reporter named Weijia Jiang reported that it ran an unusual one hour and 15 minutes.

The Vatican shared that President Biden and Pope Francis met privately for one hour and 15 minutes, which is a long time for the Pope to spend with any world leader. President Obama’s one on one meeting lasted for 50 minutes. President Trump’s was 30 minutes.

“The Vatican shared that President Biden and Pope Francis met privately for one hour and 15 minutes, which is a long time for the Pope to spend with any world leader,” Jiang noted. “President Obama’s one on one meeting lasted for 50 minutes. President Trump’s was 30 minutes.”

Former Nevada GOP Chairwoman Amy Tarkanian then shared an unpleasant rumor that was going around Rome about Biden:

The word around Rome is that Biden’s meeting with the Pope was unusually long because Biden had a bit of an “bathroom accident” at the Vatican & it had to be addressed prior to him leaving.

I know we joke often about this, but this is the actual rumor going around Rome now.

“The word around Rome is that Biden’s meeting with the Pope was unusually long because Biden had a bit of an ‘bathroom accident’ at the Vatican & it had to be addressed prior to him leaving,” Tarkanian said. “I know we joke often about this, but this is the actual rumor going around Rome now.”

The rumor then exploded on Twitter, as the appropriately named anonymous commentator Catturd fueled the hashtag #PoopyPantsBiden to number one:

The social media reaction to the rumor

When it comes to Twitter trends, @catturd2 is a force of nature. #PoopyPantsBiden

The Number One Trending Hashtag In The United States Right Now pic.twitter.com/7qWqT5qda6

If Biden sh*t his pants with the Jesuit Pope, what’s going to happen when he has to meet with Vladimir Putin or Xi Jinping? 😬 #PoopypantsBiden

That is a "did I just shit myself" face. #PoopypantsBiden pic.twitter.com/v09iy2qdBb

President Biden did not confirm following his meeting with the Pope that his “butt’s been wiped.”

There does not appear to be visual confirmation that he had changed his suit, whether before his meeting with Italian Prime Minister Draghi or French President Macron. Nor is there video evidence to confirm or deny what happened at Biden’s meeting with the Pope.

The #PoopyPantsBiden hashtag improbably trended to #1 on Twitter. This  is the price the Biden administration has to pay for its lack of transparency. It should be noted that similar accounts have been made about former President Donald Trump, although none of those rumors were proven either.

The problem with cutting off independent media access, as well as running a presidency with extreme secrecy, is that it becomes very difficult to definitively debunk Internet speculation. If the White House were more forthright with the American people, perhaps trends like “Let’s Go Brandon,” “F*ck Joe Biden,” and now, #PoopyPantsBiden, wouldn’t be so likely to explode on the Internet.

So, will we ever be able to prove that President Biden pooped his pants when he met the Pope? Depends.