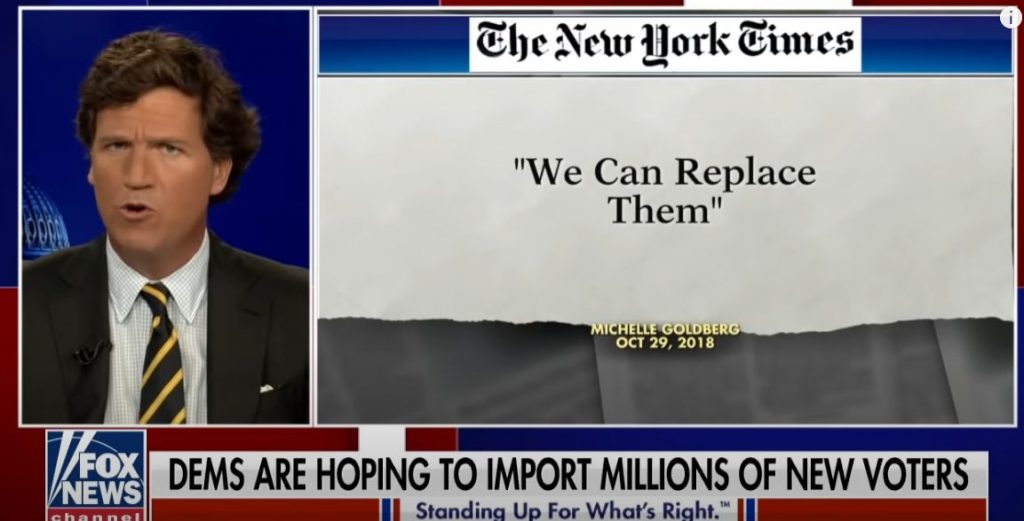 Tucker Carlson continues to show why he is one of the most fearless commentators in all of primetime cable news. In a Monday night monologue, he demolished the fake controversy surrounding his ‘replacement’ remarks.

As Tucker points out in the extended 20-minute clip, which shows part of the purportedly ‘incendiary’ exchange with occasional show guest host Mark Steyn, the Democrats are not bashful about touting that the party seeks power through demographic change.

“In order to win and maintain power, Democrats plan to change the population of the country,” Carlson claimed, uncontroversially. Watch:

The Anti-Defamation League pulled a defamatory card out of its left-wing playbook and claimed that Carlson “embraced a foundational theory of white supremacy,” which is the “great replacement” theory.

In overview, the “replacement” theory holds that the Democratic Party is not opposed to illegal immigration coming from favorable voting populations and even actively encourages it in order to overturn initially unfavorable electorates in states like California, Texas, and Virginia.

Carlson rightly points out that if the illegal immigrants were Republican-leaning and coming from places like Poland, which know the threat of communism and actively oppose it, then the Democratic Party would have it shut down immediately.

“If 200,000 immigrants from Poland showed up at our southern border tomorrow,” Tucker said, “Kamala Harris wouldn’t promise them healthcare. Why? Simple. Poles tend to vote Republican. That’s the difference. Democrats would deport those migrants immediately. No more hand-wringing about how ‘we are a nation of immigrants.'”

“Hundreds of thousands of likely Republicans massing in Tijuana?” he added. “That would qualify as a national crisis. We’d have a border wall by Wednesday.”

Tucker Carlson goes on to provide simple-to-grasp analysis on why Democrats refuse to even acknowledge there is so such thing as “illegal immigration,” despite there being U.S. immigration laws on the books. It helps the party transform states like California into far-left bastions of radical politics.

It is a banal observation, but it is driving the media apoplectic because it is ‘forbidden’ to expose the left’s political tactics. The electoral shifts to one-party control in deep blue states have been driven in large part by unchecked immigration.

“The Democratic Party is working to make certain it will happen everywhere else,” Tucker continued. “That’s not a slur. It’s not a guess. We know it because they brag about it constantly. The left becomes unhinged if you point out that American voters are being replaced by Democratic Party loyalists from other countries. You are absolutely not allowed to say that. But they are allowed to say that. And they do. They say it all the time. They have done studies on it. Written long books about it. Talked about it endlessly on television — often in the ugliest racial terms. They are not ashamed at all. They don’t think they have to be ashamed.”

Tucker then points to a 2018 New York Times piece literally entitled, “We Can Replace Them.”

The most devastating part of the Tucker Carlson segment, available at the top of the article, is his response to the ADL. He uses the ADL’s own argument in 2010 about Palestinian immigration to Israel against them.

“With historically high birth rates among the Palestinians, and a possible influx of Palestinian refugees and their descendants now living around the world, Jews would quickly be a minority within a bi-national state, thus likely ending any semblance of equal representation and protections,” Tucker Carlson reads from the ADL article. “In this situation, the Jewish population would be increasingly politically – and potentially physically – vulnerable.”

“It is unrealistic and unacceptable to expect the State of Israel to voluntarily subvert its own sovereign existence and nationalist identity and become a vulnerable minority within what was once its own territory,” the ADL article argued.

Fox Corporation’s CEO Lachlan Murdoch responded to the ADL’s demand that Tucker Carlson be ‘canceled’ for his analysis.

“Fox Corporation shares your values and abhors anti-semitism, white supremacy and racism of any kind,” Murdoch wrote ADL chief executive Jonathan Greenblatt on Sunday. “In fact, I remember fondly the ADL honoring my father with your International Leadership Award, and we continue to support your mission.”

“Concerning the segment of ‘Tucker Carlson Tonight’ on April 8th, however, we respectfully disagree,” Murdoch continued. “A full review of the guest interview indicates that Mr. Carlson decried and rejected replacement theory. As Mr. Carlson himself stated during the guest interview: ‘White replacement theory? No, no, this is a voting rights question.'”

The ADL would not accept the response from Lachlan Murdoch, however.

“Although I appreciate the sentiment that you and your father continue to support ADL’s mission, supporting Mr. Carlson’s embrace of the ‘great replacement theory’ stands in direct contrast to that mission,” Greenblatt wrote.

“As you noted in your letter, ADL honored your father over a decade ago,” Greenblatt continued, “but let me be clear that we would not do so today, and it does not absolve you, him, the network, or its board from the moral failure of not taking action against Mr. Carlson.”

As far as a “moral failure” goes, perhaps the ADL should look into canceling itself, based on Tucker Carlson’s monologue. The “great replacement” that is most important to the ADL and partisan groups like it is not one about the Democrats effectively importing favorable voters. No. This is about “replacing” Fox News hosts who give their political game away.