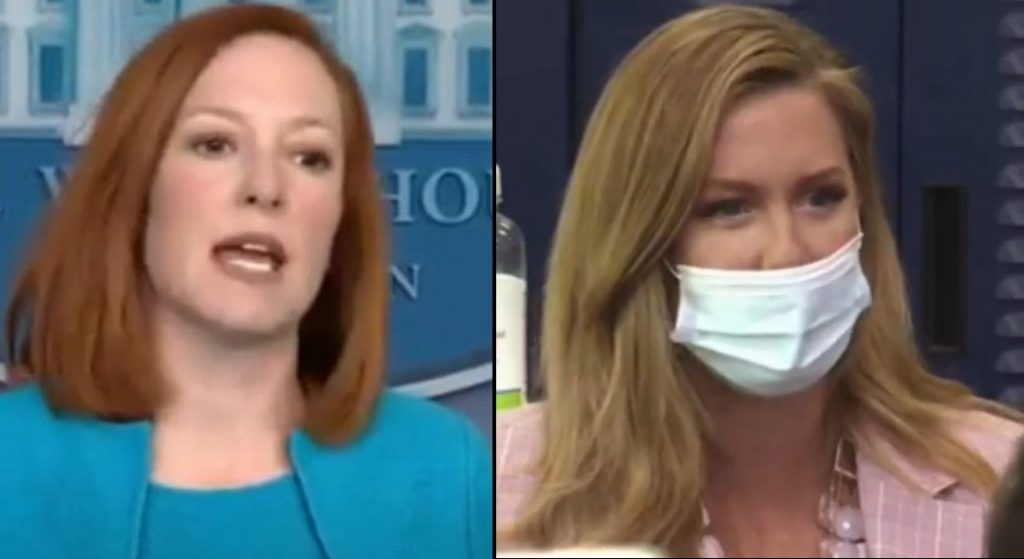 Jen Psaki was having another case of the Mondays as reporters battered the White House Press Secretary over Biden’s border crisis.

A reporter had the temerity to confront Psaki about an explosive report that the Biden administration had arranged for illegal immigrants to be sheltered in hotels at a cost to taxpayers of $86 million.

“So, also you are opening up new facilities,” Newsmax’s Emerald Robinson said. “One of the options that is being reported over the weekend is spending $86 million on hotel rooms for some migrants and feeding them.”

“How do you square National Guard troops who were sleeping in parking garages, and some of them got sick from having contaminated food,”  she continued. “That’s a disparity a lot of people are pointing out: That our National Guard were treated one way and then illegal immigrants are going to be put in hotel rooms?”

“Well, first let me say that at the time that we became aware of the conditions, National Guard in, in parking garages,” Psaki stammered, “As you noted, the president called the head of the National Guard that day and offered his assistance. Offered to play any role that he could play. Boosting morale, asking for more aid, making sure they had the right — were treated in the way that they deserved for the incredible role they’ve played.”

“So, I know that was some time ago,” Psaki continued. “But that’s the reaction he took at the time.”

It doesn’t take a shrewd observer to note that Psaki did not answer the premise of the question: What about the hotels for illegal immigrants?

“But if I may, I don’t know if there are CDC guidelines that say, ‘You can be open…” Doocy began.

“Apologies,” Psaki said. “I was misunderstanding your question.”

“Look, I think our objective is to move — this is one of the reasons this is such a focus every single day for the president and this administration,” she continued. “We want to move these kids as quickly as possible through these facilities and into the shelters where they, where there is safe spacing and then move them into homes where there is safe spacing and we are concerned about the public health impact. That’s why we’re putting in place a number of policies to expedite these processes.”

“But the first stop it is just not happening,” Doocy objected. “And that is part of the federal government that you guys are in charge of.”

“Well, I think I have outlined for you specifically, even a number of steps that we have taken and we’re taking to expedite processing at the border, to ensure we are expediting the timeline, because these border patrol facilities are not made for children,” she replied.

“We want to move in in part because of COVID in part because they’re not places that have the educational, the health resources and other resources that we believe these children have access to,” she continued. “That’s where all of our focus is on and why we’re working to expedite things. We have a plan for implementing it on that. We’ll be successful. I have limited time so want to go questions of the vaccine.”

Emerald Robinson also asked Psaki about Biden falling down the stairs to Air Force One. Watch: