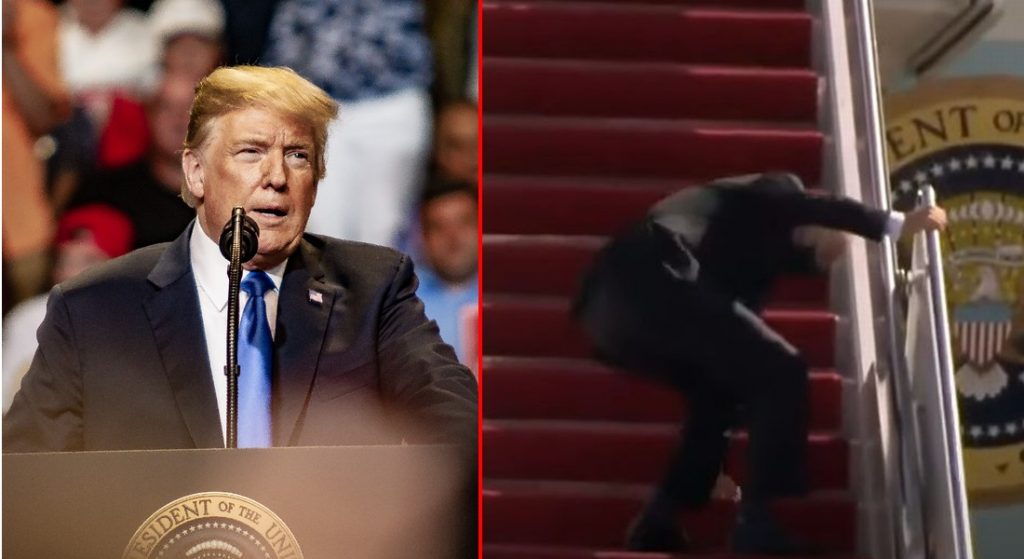 Donald Trump roasted Joe Biden for falling down the stairs at an event on Friday night.

Biden’s attempt to climb the stairs to Air Force One was met with widespread mockery after people saw that the president was okay.

Watch as he falls down three separate times while he clings desperately to the guard rails:

The White House’s deputy press secretary Karine Jean-Pierre comically attempted to explain the series of falls as due to the wind.

She added that Biden “is doing 100 percent.”

However, the wind conditions there were very light.

Biden Spox: Yea, the wind!!! That’s it… the wind. The president is in tip top shape.

She tweeted, “I know folks have seen that President Biden slipped on his way up the stairs to AF1, but I’m happy to report that he is just fine and did not even require any attention from the medical team who travels with him. Nothing more than a misstep on the stairs.”

Donald Trump Jr. issued a parody video that was immediately “fact-checked” by the dishonest media.

Wait you’re telling me this is edited???
I’m sorry, I had no idea I was spreading this kind of gross disinformation. https://t.co/ulLZTLtciK pic.twitter.com/8k6hlQ2UXe

Biden had even once mocked Trump and boasted he could climb up ramps better than the former president.

FLASHBACK -> Biden mocks Trump's ramp walk at West Point and claims he's stronger: "Look at how he steps and look at how I step. Watch how I run up ramps and he stumbles down ramps. Come on." pic.twitter.com/U7CL0dBSQA

Former White House social media director for Donald Trump was quick with his own responses.

The Trumps didn’t fail America when it really counted. When it comes to roasting Biden for his missteps — both political and literal — they are undefeated.