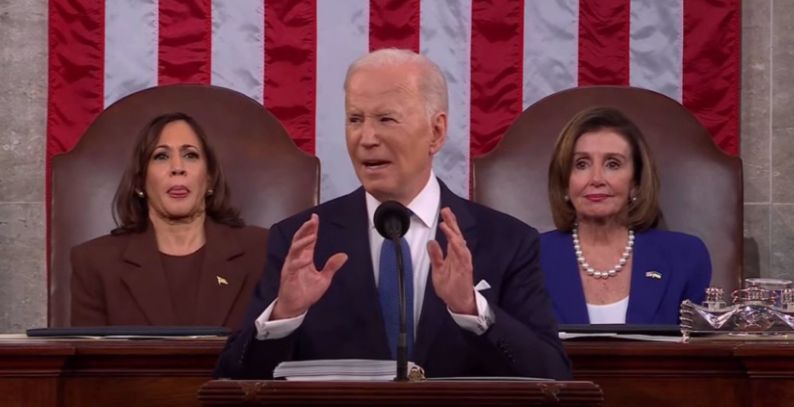 President Joe Biden flubbed a passionate speech in defense of the ‘Iranian people’ at his first State of the Union address on Tuesday. Watch:

“Democracies are rising to the moment,” Biden said. “And the world is clearly choosing the side of peace and security. This is the real test and it’s going to take time.”

“So, let us continue to draw inspiration from the iron will of the Ukrainian people, to our fellow Ukrainian Americans who forge the deep bond that connects our two nations,” he said. “We stand with you. We stand with you. Putin may circle Kyiv with tanks, but he’ll never gain the hearts and souls of the Iranian people. He’ll never, he’ll never extinguish their love of freedom and he will never, never weaken the resolve of the free world.”

It marked an embarrassing anti-climactic moment for Biden, whose presidency has been plunged into the midst of international crisis. As if it didn’t have enough problems, already.

Before the Russian invasion, the Speaker of the House Nancy Pelosi also didn’t seem to have a clue about Russia and Eastern European politics. Watch:

“If you look at the map and you see Hungary and you see how it is encircled…” Pelosi said before droning on. “Russia, Belarus, Crimea — which they have taken over by, you know, it’s still a danger now to Ukraine — and then you see Poland and Romania and all of those countries just abutting it, that’s Russian influence.”

It’s not clear if Pelosi was having a flashback to the Cold War, but Hungary was not really under threat of Russian invasion. It was Ukraine and Moldova that were under threat.

Kamala Harris has also provided her sage wisdom on the matter.

“Ukraine is a country in Europe. It exists next to another country called Russia. Russia is a bigger country." pic.twitter.com/QYPLJ02mDy

“Ukraine is a country in Europe,” Harris said. “It exists next to another country called Russia. Russia is a bigger country.”

God help us all.