5G wireless technology has become the source of much controversy, and not just whether or not it interferes with aviation or people’s health concerns.

Tucker Carlson sought to unpack the push for 5G with telecom veteran Jonathan Pelson on Monday night’s episode of “Tucker Carlson Tonight” on Fox News.  Pelson is the author of “Wireless Wars, China’s Dangerous Domination of 5G and How We’re Fighting Back.”

“You may have noticed something called 5G is coming to the United States,” Tucker Carlson said. “We were told that it might interfere with airplanes. We just had the most interesting conversation of the year with Jonathan Pelson. He said 5G is not actually about your cell phone at all and it’s controlled by China. This is one of those conversations that we got increasingly wide eyed. You should watch the whole thing but here’s part of it.”

“5G despite the advertisements is not just a faster 4G,” Pelson said. “The real pay-off of 5G is that factories are going to use it to totally interconnect themselves. This thing called ‘the internet of things.’ Their traffic systems. License plate readers. Facial recognition systems. The way farms operate. There are devices now and sensors, wire lessens source on tractors, put sensors in the soil to test moisture levels, all of this will be connected.4-g network can’t handle that. If they can handle a thousand calls in one sector, 5G can handle a hundred thousand, so even though commercials talk about it being a lot faster than 4G…”

“What you just described is a means of toll social control,” Tucker interjected.

“You see what China would be so interested in being a dominant supplier of it,” Pelson went on. “There is a line between a license plate reader being used to find some kidnapped child and a plate meter being used to find an opposition leader going to a rally against the sitting elected officials, or ruling officials. China is interested certainly in the second part a lot more than in the first.”

“So, you’ve heard the term 5G,” Tucker said. “If you’re like most people you don’t know exactly what it is or what it will mean for your country. That was Jonathan Pelson who spent a lifetime in telecom, explaining it better than anybody that we’ve seen.”

According to his Amazon author biography, Jon Pelson joined Lucent Technologies during the 1990s, helping to “create and market some of the company’s breakthrough technology solutions.”

In Pelson’s book Wireless Wars: China’s Dangerous Domination of 5G and How We’re Fighting Back, he explains “how America invented cellular technology, taught China how to make the gear, and then handed them the market,” according to the book’s description.

Pelson shares “never-before-told stories from the executives and scientists who built the industry and describes how China undercut and destroyed competing equipment makers, freeing themselves to export their nation’s network gear—and their surveillance state,” the book description adds. “He also reveals China’s successful program to purchase the support of the world’s leading political, business, and military figures in their effort to control rival nations’ networks.”

So, what is 5G? PC Mag describes its evolution.

“The G in this 5G means it’s a generation of wireless technology,” the article explains. “While most generations have technically been defined by their data transmission speeds, each has also been marked by a break in encoding methods, or ‘air interfaces,’ that makes it incompatible with the previous generation.”

“5G brings three new aspects to the table: bigger channels (to speed up data), lower latency (to be more responsive), and the ability to connect a lot more devices at once (for sensors and smart devices),” the article adds.

PC Mag testing showed that AT&T and T-mobile, U.S. telecom giants that together have invested $81 billion in the technology, have had mixed results. T-mobile has faster speeds at this point, but PC mag says that Americans have 5G technology without the “5G experience.” 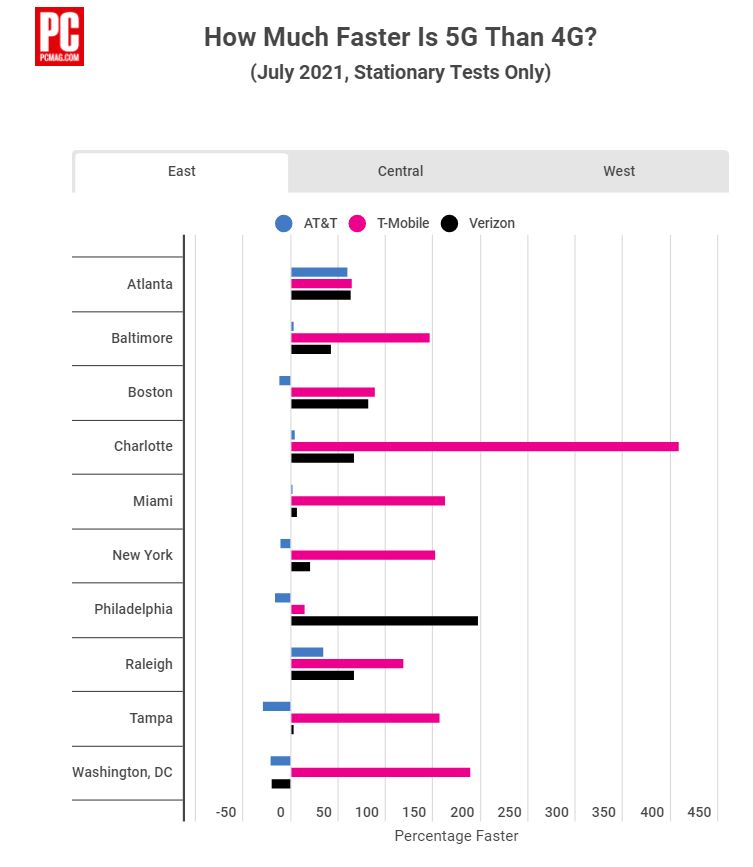 So, what is the “5G experience”? It all turns to what has been coined the “internet of things.”

“It was coined in 1999 by a British innovator called Kevin Ashton to refer to the world of physical objects — like self-driving cars, remote-controlled thermostats and drones — connected to the internet,” the CBC explains. “This goes to the importance of 5G latency and the instantaneous send and response times that will allow our devices to communicate directly with each other, essentially cutting humans out of the equation.”

“In the 21st century, because of the internet of things, computers can sense things for themselves,” Ashton told Smithsonian Magazine in 2015.

“It’s already hard to imagine a world without GPS: it helps us find our way around. In the imminent future, it will enable things like self-driving cars, which will give us back the 20 days a year we spend doing nothing but driving, will save 40,000 lives a year in the U.S. alone, will reduce traffic and pollution, and will allow cities to grow without devoting as much land to roads.”

The U.S. Congress has been extremely interested in promoting 5G technology development in the United States. As Fox Business reported in January,  the Federal Communications Commission (FCC) pursued next-generation wireless under ‘the 5G FAST plan.’ Lawmakers then drafted related legislation called the “Beat CHINA for 5G Act.” It was passed as part of the Omnibus spending bill in December 2020.

Lawmakers in a number of countries — the United States, the United Kingdom, Australia and Canada — have thrown up red flags about the potential for China to infiltrate and exploit 5G technology; particularly via equipment manufactured by Chinese telecom Huawei, which has been closely associated with the Chinese Communist Party (CCP).

“The possibility of a Chinese company having access to the core of Western telecommunications systems has raised questions about the connection between the Chinese government and Huawei,” CBC reported in April 2019.

“A 2012 congressional report into Huawei’s activities concluded that the risks associated with the company’s ‘provision of equipment to U.S. critical infrastructure could undermine core U.S. national-security interests’,” the report noted.

A British parliamentary inquiry found there is “clear evidence of collusion” between Huawei and the “Chinese Communist Party apparatus,” the BBC reported in March.

Due to such national security risks, the U.S. excluded Huawei from contracts with the American government or its contractors, which sparked a civil suit from Huawei. The Australian government also banned Huawei from its 5G networks, the CBC noted.

“The United Kingdom has banned Huawei from core parts of the British communications network, and Dutch telecom giant Royal KPN NV has said it will use a Western supplier to build the core 5G mobile network,” the CBC said.

“The nature of these networks is such that you might not see that evidence,” said Sanger, author of the book “The Perfect Weapon,” which traces the rise of cyber weapons.

“5G is very little dependent on hardware, it’s mostly a software layer … so it’s not as if there’s one piece of software that somebody could examine and it would remain the same,” he added. “Like your iPhone, it would be constantly updating itself into new versions and you might not see changes that ended up diverting data.”

5G may be ‘the wave of the future.’ It is already being implemented in the United States. But like any technology, it may be used for the benefit of mankind or for greater social control.

The real “dual use” of 5G technology may very well be whether it is used for good or for evil.