The U.S. Congress continues to hold hearings on the Capitol riots that flared up on January 6, 2021. But it continues to turn a blind eye to the extreme negligence of Democratic officials, whose poor security decisions laid the groundwork for the Capitol building siege.

On Thursday, House Democrats adopted an amendment to the National Defense Authorization Act that would give the Washington D.C. mayor the authority to call up the D.C. National Guard.

“The House adopted an amendment to the annual defense spending bill on Wednesday that would give the mayor of Washington, D.C. authority over the capital city’s national guard,” the Hill reported.

“The measure — sponsored by Reps. Carolyn Maloney (D-N.Y.), Anthony Brown (D-Md.) and Del. Eleanor Holmes Norton (D), who represents the District of Columbia — was approved in a mainly party-line vote of 218-209 to be added to the House version of the National Defense Authorization Act (NDAA),” the report noted.

“The House is expected to pass the full NDAA this week,” the report added. “The lower chamber will then go into conference in the Senate, where the amendment could be taken out.”

Rep. Andrew Clyde (R-A) said giving the D.C. mayor authority over the city’s National Guard instead of the president is “completely unacceptable.”

“I can’t believe this even has to be said, but the D.C. mayor is not the governor of a state. And the District of Columbia, which houses our federal government, is not and should never become a state,” Clyde said during a floor debate.

The measure calls for giving the D.C. mayor, currently Muriel Bowser, command over the D.C. National Guard despite playing a key role in the Capitol’s security disaster on January 6.

“Washington, D.C. Mayor Muriel Bowser told federal law enforcement to stand down just one day before a mob of Trump supporters breached the U.S. Capitol on Wednesday, smashing windows, entering the chambers, and forcing lawmakers and congressional staff inside into lockdown,” the Federalist reported on January 6, 2021.

“To be clear, the District of Columbia is not requesting other federal law enforcement personnel and discourages any additional deployment without immediate notification to, and consultation with, MPD if such plans are underway,” Bowser wrote in a letter to acting U.S. Attorney General Jeffrey Rosen, acting Secretary of Defense Chris Miller, and Secretary of the Army Ryan D. McCarthy. 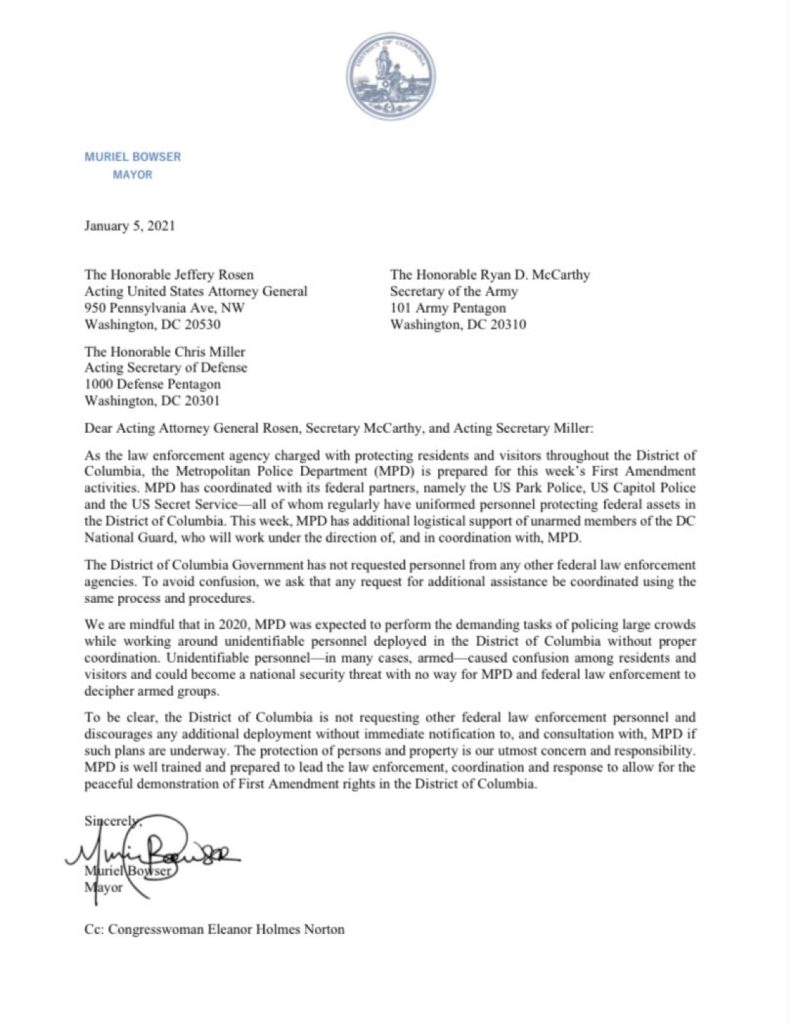 “According to Bowser, D.C.’s Metropolitan Police Department in coordination with the U.S. Park Police, Capitol Police, and Secret Sevice were well-equipped to handle whatever problems could come up during the Trump rallies planned” for January 6, the report added.

“The District of Columbia Government has not requested personnel from any other federal law enforcement agencies,” Bowser continued. “To avoid confusion, we ask that any request for additional assistance be coordinated using the same process and procedures.”

The mayor also contended that the presence of “unidentifiable” federal law enforcement agents in D.C. could “cause confusion” and “become a national security threat” because of the lack of clarity between them and “armed groups.”

The Washington Post earlier explained the chain-of-command for calling up the D.C. National Guard.

“Because the District is a special federal jurisdiction without the status of a state, the D.C. National Guard is controlled by the president, who delegated his authority over the forces to McCarthy,” the report noted. “The District’s mayor can request the deployment of the D.C. Guard but doesn’t have the power to deploy guardsmen herself or control them once deployed. Governors control the Guard in other states.”

Mayor Bowser was not the only official to put the Capitol security in an exceptionally vulnerable state prior to the January 6 riots.

Testifying on the January 6 security failures, the Capitol Police’s Inspector General Michael Bolton stated effectively that a ‘stand down’ order had been given that weakened security at the Capitol. Bolton provided testimony that explains the decision to disarm Capitol Police of powerful riot-control weapons.

“An order to hold back heavy riot-control weapons left Capitol Police at a grave disadvantage as front-line officers, vastly outnumbered, fought to protect Congress from a violent mob Jan. 6,” the Washington Post reported.

“Inspector General Michael Bolton told the House Administration Committee that a deputy assistant chief of police instructed officers not to use the weapons — including stingballs and 40mm launchers — out of concern that ‘they could potentially cause life-altering injury and/or death, if they were misused in any way’,” the Post said.

“Bolton did not identify the chief, but he said that had officers employed such measures, ‘it certainly would have helped us that day to enhance our ability to protect the Capitol’,” the report continued.

Major General William J. Walker, the commanding general of the D.C. National Guard, testified before Congress in March, 2021, and raised grave concerns about the deliberately weakened Capitol security situation leading up to January 6. Walker explained that unnamed civilian authorities had a purported concern about “optics,” and made it clear that such concerns were “unusual.”

It should be noted that the Pentagon placed limits on the National Guard’s ability to mobilize and prepare for the riots, the Washington Post earlier reported. President Trump also requested that 10,000 National Guard troops be at the Capitol.

It was not be the first time that President Trump’s security concerns would go ignored in Washington D.C. — with disastrous consequences. However, the Democrats continue to reward officials who have a track record of failure with even more authority to fail the Americans people again.