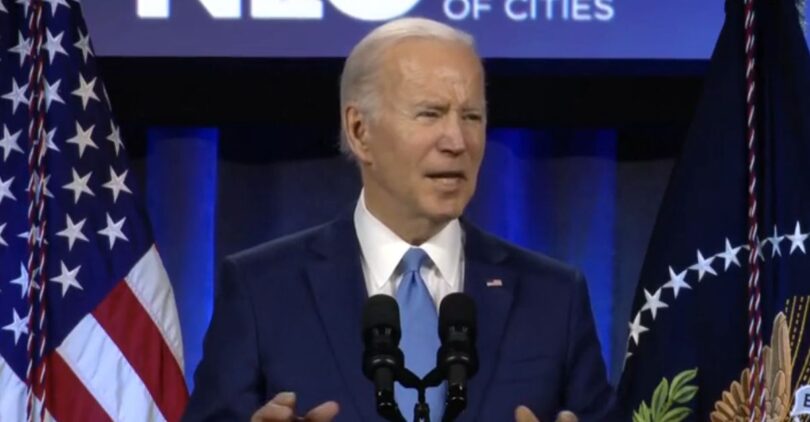 President Biden has an excuse for the skyrocketing gas prices and surging inflation that has marked his entire presidency: It’s Putin’s fault. That’s “not a joke,” according to Biden. Watch:

“And now, second big reason for inflation is Vladimir Putin and gas prices, not a joke,” he said. “We’ve seen the price of gas go up over a dollar just since he put his troops on the border, on the border of Ukraine.”

“They went up a dollar and five cents,” he said. “Big part of that reason is Putin began amassing troops along the border and then crossed. And guess what? The world took notice.”

“The market anticipated, prices went up, and then Putin invaded,” he added. “Make no mistake, the current spike in gas prices is largely the fault of Vladimir Putin. It has nothing to do with the American Rescue Plan.”

“Back to Wall Street, Wall Street estimated that the San Francisco Federal Reserve said — analyzed it, said the Rescue Plan contributed only 0.3 percent to inflation. 0.3 percent,” he added. “That’s coming from the Fed. Rescuing our economy didn’t cause this problem, but we are working to fix it.”

In January, before anyone outside of intel circles and well-sourced journalists thought Russia would invade Ukraine, inflation hit a 39-year high.

“Another month, another record-setting leap in prices,” the USA Today reported. “Inflation hit a fresh 39-year high in December as a drop in energy costs wasn’t enough to offset a steady march upward for staples such as food, rent and cars amid stubborn supply-chain bottlenecks and worker shortages.”

The Biden administration is providing Americans with a hard lesson: The politicians who take your money and throw it on the wind may lie, but your wallets don’t.

Blaming Putin may have worked for Trump-hating leftists as an excuse for losing the election, but that’s not going to fly at the grocery store or the gas pump.