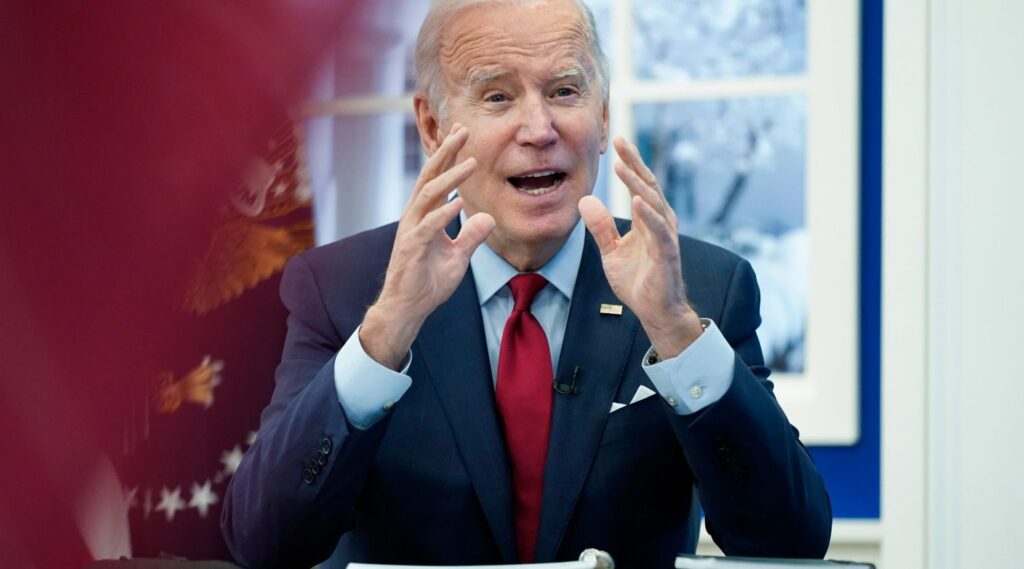 The U.S. and Russia appear poised to engage in a militarized conflict over Ukraine. President Joe Biden is issuing a dire warning that a Russian invasion would have “enormous consequences worldwide.”

“This would be the largest … invasion since World War II,” Biden said on Wednesday. “It would change the world.”

America’s top U.S. diplomat in Ukraine, Kristina A. Kvien, added to the foreboding tone with assurances that Ukrainian troops are “well equipped” and “ready.”

“Russian soldiers sent to Ukraine at the behest of the Kremlin will face fierce resistance,” she said. “The losses to Russia will be heavy.”

The Pentagon has put 8,500 U.S. military personnel on “prepare to deploy orders,” while U.S. commanders say they could redeploy some of the 64,000 troops permanently stationed in Europe at a moment’s notice.

The United States and its NATO allies have delivered its demands to Moscow in the form of a letter, but Russia’s foreign minister says that the nation received no “positive response.”

Foreign Minister Sergei Lavrov in a press conference on Wednesday did not divulge the details of the diplomatic letter, but noted that although it was beginning of serious talks, it did not address Russia’s main concerns.

“I think that the content of the answer will become known to the general public in the very near future,” Lavrov said in Russian. “As for the content of the document, there is a reaction there that suggests the beginning of a serious conversation, but on secondary topics. There is no positive response to the main issue in this document.”

“The main issue is our clear position on the inadmissibility of NATO’s further expansion to the East and the deployment of offensive weapons that could threaten the Russian Federation,” he added.

Meanwhile, on Wednesday, the Biden administration and NATO informed Russia there will be no U.S. or NATO concessions on Moscow’s main demands to resolve the Ukrainian standoff.

The U.S. and NATO, in separate written responses, reiterated the open-door policy for NATO membership, did not agree to permanently ban Ukraine from admission, and said that its military force posture in Eastern Europe were nonstarter items.

“There is no change, there will be no change,” Secretary of State Antony Blinken emphasized.

The breakdown in diplomatic talks accompanies intelligence reports that the U.S. State Department says show “every indication” of an imminent Russian invasion of Ukraine by mid-February.

“A U.S. State Department official claimed that intelligence shows ‘every indication’ Russia will use military force in Ukraine by mid-February,” Fox News reported.

“An unnamed U.S. official first told Fox News on Jan. 14 that Russia had started to prepare for a ‘false-flag operation’ in eastern Ukraine, which would provide the pretext for an invasion,” the report added. “The official said that preparations would take several weeks, meaning that any invasion would likely begin by mid-February at the latest.”

Deputy Secretary of State Wendy Sherman reiterated those claims on Wednesday while speaking at the Yalta European Strategy Forum.

“I have no idea whether he’s made the ultimate decision, but we certainly see every indication that he is going to use military force sometime perhaps (between) now and the middle of February,” Sherman said.

The Kremlin’s messaging has been consistently negative towards Biden’s diplomatic overtures, including the U.S.’s letter delivered on Wednesday, signaling that there was “not much cause for optimism.”

“All these papers are with the president,” Dmitri S. Peskov, Putin’s spokesman, told reporters. “There will of course be some time needed to analyze them — we won’t rush to any conclusions.”

Russian Security Council Deputy Chairman Dmitry Medvedev, the former president of Russia before Vladimir Putin effectively became ‘president for life,’ underscored the NATO question at the heart of the conflict, but added there are other contentious issues.

“The matter is not only about NATO’s non-expansion, however, it is very important. I believe, that the matter is about  providing other guarantees,” Medvedev said.

“It can be assumed later as ‘No-No’ we are not NATO and let’s say it is under an agreement between the United States and Ukraine, Britain and Ukraine, it has nothing to do with NATO and it is about our bilateral relations,” he added.

Foreign Minister Lavrov is additionally insisting that Ukraine abide by the Minsk agreement of 2015, which recognizes the ‘special status’ of Donbass, an eastern region of Ukraine.

“The Western patrons of the Ukrainian regime have assured us – including Americans (by the way, at [Russian President Vladimir] Putin’s meeting with [US President Joe] Biden in Geneva in June) – that they will make sure that Kiev complies with its commitments under the package of measures signed in Minsk in 2015, first and foremost, with regard to ensuring the special status of Donbass,” he said.

“I proceed from the fact that this obligation lies with the West and it must ensure that Kiev complies with the Minsk agreements,” he added. “Then all the questions will cease to exist. I am very hopeful that it will be the case.”

The U.S. and Russia thus are entangled in a militarizing standoff at a time when the Biden presidency is facing imploding domestic approval ratings. The nation’s saber-rattling follows in the wake of a disastrous Afghanistan withdrawal after nearly two decades of war. Americans have seen this scenario play out before and rarely to the nation’s benefit.