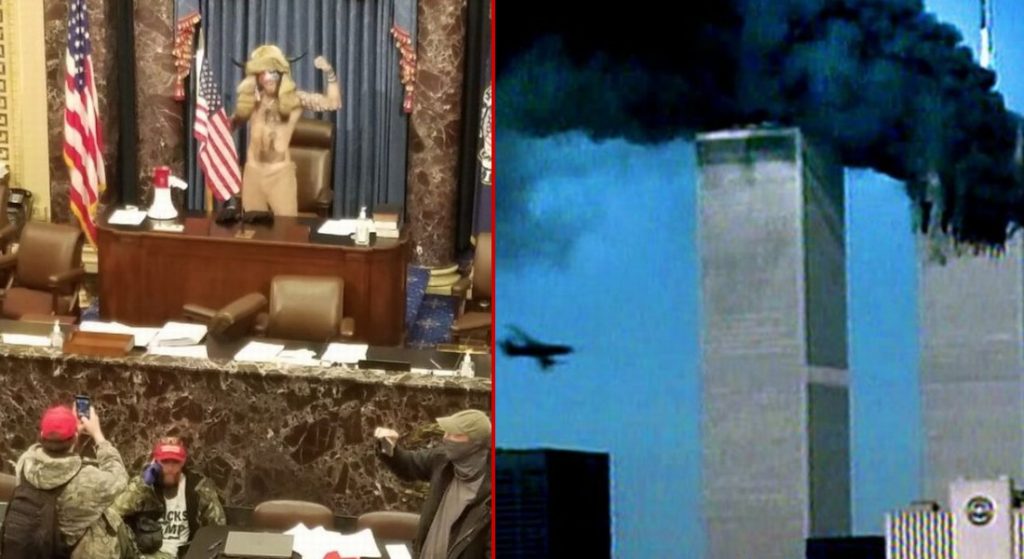 An ex-Republican “Never Trump” activist for the disgraced Lincoln Project made a reckless, disrespectful, tone-deaf claim about the January 6th Capitol riots at a ‘town hall’ event on Wednesday.

“The 1/6 attack for the future of the country was a profoundly more dangerous event than the 9/11 attacks,” Steve Schmidt said. “And in the end, the 1/6 attacks are likely to kill a lot more Americans than were killed in the 9/11 attacks, which will include the casualties of the wars that lasted 20 years following.

“We have had … political violence in this country, and I believe we’re on the edge of another one, tragically,” he continued. “And we have to fight back against it at the ballot box.”

It is unclear if Schmidt is making an ominous form of foreshadowing about government repression in the aftermath of the January 6th event or if he truly believes the far-right extremists who planned the unarmed siege on the Capitol building constituted as serious a threat as al Qaeda did.

If that is Schmidt’s argument, then judging by events alone, the fatalities register: “al Qaeda: 3,000+; Capitol rioters: 0.”

That is because at the January 6th uprising there where no rioters in the Capitol building who were armed with firearms. The only person provably killed was Trump supporter Ashli Babbitt. There were no “capture and kill” teams. There was no “coup” that could potentially transfer sovereignty from the United States of America to a bunch of fringe extremists.

Islamic extremist terror groups like al Qaeda and ISIS would go on to kill hundreds more since 9/11. This also doesn’t directly count the nearly 7,000 troops killed in the ensuing wars in Iraq and Afghanistan, which is now only drawing to a close. Schmidt then seemingly predicts a minimum of 10,000-15,000 Americans killed because of the Jan.6 riot and its aftermath.

The “threat,” so to speak, exists almost entirely in these Trump “resistance” types’ overactive imaginations. But that hasn’t stopped the Department of Justice and the left-wing media from fueling these exaggerated minimal threats.

Former CIA Director John Brennan nonethless said around the time of the inauguration that the new administration would be “moving in laser-like fashion to try to uncover as much as they can about” the pro-Trump “insurgency” that included “religious extremists, authoritarians, fascists, bigots, racists, nativists, even libertarians.”

There were also supposed to be ongoing threats against the U.S. Capitol lasting for months. D.C. was militarized with patroling troops and tall razor-wire fences. Alas, no violence threats would come to D.C, except for some BLM activists threatening to ‘burn’ the capitol, and a black man named Noah Green who rammed his car into two Capitol Police officers, killing one officer.

“I certainly agree that we are facing a more dangerous period than we did in Oklahoma City at that time,” Garland reacted to a question on the Capitol riots at a confirmation hearing before the Senate Judiciary Committee.

Senator Josh Hawley, during the confirmation hearings, also pressed Garland to recognize the threat posed by radical groups like Antifa and BLM, which stoked riots that led to the deaths of over 20 Americans.

“Well, senator, my own definition, which is about the same as the statutory definition is ‘the use of violence or threats of violence in attempt to disrupt democratic processes,’” he said.

“So, an attack on a courthouse while in operation, trying to prevent judges from actually deciding cases that plainly is domestic extremism, domestic terrorism,” he continued. “An attack simply on a government property at night or any other kind of circumstances is a clear crime and a serious one and should be punished. I don’t mean… I don’t know enough about the facts of the example you’re talking about, but that’s where I draw the line. One is… both are criminal, but one is a core attack on our democratic institutions.”

There you have it. Antifa and Black Lives Matter activists’ billions of dollars in destructive rioting, leading the deaths of at least nine innocent Americans, and hundreds of injuries, does not conflict with our core democratic processes, according to Garland. Therefore, it’s not “domestic terrorism.”

The real threat being posed to the United States is from radical activists who continue to make baseless, incendiary arguments about their political opposition. Americans don’t need to wait around for the right’s hypothetical reaction to the extremist left’s overreach. They can simply look at the thousands of hours of footage of BLM and Antifa activists rioting, looting, burning down cities, and even killing Americans throughout nearly all of 2020.