While the United States grapples with serious issues being raised about the integrity of its nuclear chain-of-command, the nation’s primary adversaries Russia and China are quietly building massive nuclear weapons stockpiles.

“China‘s large-scale buildup of nuclear forces is part of a Beijing strategy to emulate the nuclear forces of Russia, the director of the Defense Intelligence Agency disclosed Tuesday,” the Washington Times reported on Wednesday.

“Army Lt. Gen. Scott Berrier, the DIA chief, said Chinese military forces are advancing on both the conventional and nuclear front, with the nuclear elements among the most concerning aspects,” the Times noted.

“When we talk about existential threats, the nuclear triad that the Russians have is credible and it’s effective, and I think the Chinese see that nuclear triad as a goal that they would like to have,” Gen. Berrier said.

Gen. Berrier was able to disclose a few details on the Chinese buildup to the public.

“China‘s nuclear triad includes the deployment of up to 400 new long-range missiles in silos recently disclosed in commercial satellite photos in western China,” the report said. “The silos will house China‘s new DF-41 missile that is expected to be armed with up to 10 warheads for each missile. Other elements of the Chinese nuclear triad include new missile submarines and new nuclear-capable stealth bombers.”

“China’s nuclear arsenal appears to be expanding substantially for the first time in years,” Carnegie noted. “Over the past few decades, China had maintained only about twenty silo-based intercontinental ballistic missiles (ICBMs). But recent evidence from independent U.S. experts shows that the country is likely constructing more than 200 new missile silos. China’s current program to modernize and update its nuclear weapons is moving at an unprecedented speed and scale.”

Donald Trump built up the U.S. nuclear weapons stockpile after decades of reductions under his predecessors. However, the parity that Donald Trump strived to achieve is threatened under current President Joe Biden.

“In his single term in the White House, Donald Trump expanded America’s nuclear arsenal and undermined decades of arms-control efforts,” Forbes reported in late 2020. “While President-elect Joe Biden could reverse some of Trump’s atomic initiatives, it’s highly unlikely he can undo all of them.”

“And it’s impossible for Biden to travel back in time and seize opportunities for nuclear arms-reduction that Trump squandered—with North Korea, in particular,” the report added.

“He drove the final few nails in the coffin for the first era of arms-control,” said Jeffrey Lewis, a nuclear expert at the Middlebury Institute of International Studies in California.

Trump bucked the trend extending back decades of slashing the U.S. nuclear weapons stockpile. Surprisingly, some of the steepest cuts were made under the Bush administration. 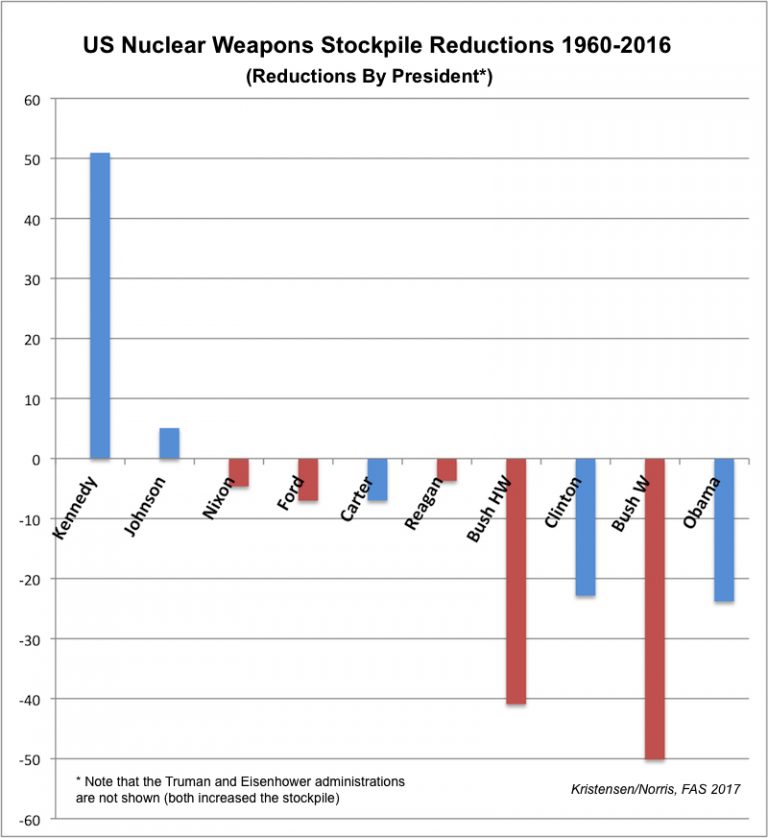 Yet the starkest call for the U.S. to cut its nuclear weapons stockpile was made by former President Barack Obama, who had the dangerous proposal of striving for a “nuclear free” world. Obviously, such a vision would invite a first strike by a ‘cheating’ enemy of the United States, for the simple reason that nuclear weapons cannot be uninvented.

“Just 10 weeks after his inauguration, President Obama’s first trip to Europe took him to Prague. Speaking in Hradcany Square, Obama voiced his deep interest in reducing nuclear arms, including a ‘commitment to seek the peace and security of a world without nuclear weapons’,” the Brookings Institute recounts. “He added that reaching that goal would require time, and that, as long as nuclear arms existed, the United States would maintain a ‘safe, secure and effective’ nuclear arsenal.”

The Brookings Institute notes that Russia chose not to re-engage in START talks and chose instead to build up its nuclear stockpile.

“In any event, matters took a different course than Obama had hoped. Following signature of the New Strategic Arms Reduction Treaty (New START) in April 2010, he called for negotiations with Russia to further reduce strategic nuclear weapons and bring in non-strategic nuclear weapons,” the institute reports. “That raised the possibility that, for the first time ever, the two countries might negotiate limits on their entire nuclear arsenals. Moscow chose not to engage in further bilateral negotiations—in part because Washington proved unready to discuss limits on missile defense or conventional strike system.”

Meanwhile, the Obama administration made deep cuts to U.S. nuclear weapons, as the Federation of American Scientists notes.

“The Obama administration has unilaterally cut the number of nuclear weapons in the Pentagon’s nuclear weapons stockpile to 4,018 warheads, a reduction of 553 warheads since September 2015,” FAS reported shortly before Obama’s second term expired. “The reduction was disclosed by Vice President Joe Biden during a speech at the Carnegie Endowment for International Peace…”

“This means that the Obama administration during its two terms has reduced the US nuclear weapons stockpile by 1,255 weapons compared with the size at the end of the George W. Bush administration – a number greater than the estimated number of warheads in the arsenals of Britain, China, France, India, Israel, North Korea, and Pakistan combined,” FAS added.

Under current President Biden, a controversy has exploded about the reported actions of General Mark Milley, the Chairman of the Joint Chiefs of Staff, who subverted the nuclear chain-of-command, according to the forthcoming book “Peril” by Bob Woodward and Bob Costa.

As background, the general made two calls to his Chinese counterpart General Li Zuocheng. The first of the unauthorized phone calls, made four days prior to the 2020 election, indicated that Milley would give advance warning to China in the event of a military attack.

“One call took place on Oct. 30, 2020, four days before the election that unseated President Donald Trump, and the other on Jan. 8, 2021, two days after the Capitol siege carried out by his supporters in a quest to cancel the vote,” the Washington Post reported.

“The first call was prompted by Milley’s review of intelligence suggesting the Chinese believed the United States was preparing to attack. That belief, the authors write, was based on tensions over military exercises in the South China Sea, and deepened by Trump’s belligerent rhetoric toward China,” the Post added.

“General Li, I want to assure you that the American government is stable and everything is going to be okay,” Milley told General Li. “We are not going to attack or conduct any kinetic operations against you.”

“General Li, you and I have known each other for now five years. If we’re going to attack, I’m going to call you ahead of time. It’s not going to be a surprise,” Milley added.

This directly subverts the Chain-of-Command and is tantamount to high treason. The second call was made two days after the January 6 riots at the U.S. Capitol.

“In the second call, placed to address Chinese fears about the events of Jan. 6, Li wasn’t as easily assuaged, even after Milley promised him, ‘We are 100 percent steady. Everything’s fine. But democracy can be sloppy sometimes’.”

“Li remained rattled, and Milley, who did not relay the conversation to Trump, according to the book, understood why,” the Post added. “The chairman, 62 at the time and chosen by Trump in 2018, believed the president had suffered a mental decline after the election, the authors write, a view he communicated to House Speaker Nancy Pelosi (D-Calif.) in a phone call on Jan. 8. He agreed with her evaluation that Trump was unstable, according to a call transcript obtained by the authors.”

The New York Times in a January 8 report provided more detail on how the Speaker of the House and the Chairman of the Joint Chiefs, who was nominated by Donald Trump in 2018, conspired to subvert the U.S. Constitution and the nuclear chain-of-command.

“Speaker Nancy Pelosi of California on Friday took the unprecedented step of asking the chairman of the Joint Chiefs of Staff about ‘available precautions” to prevent President Trump from initiating military action abroad or using his sole authority to launch nuclear weapons in the last days of his term.”

“In a phone call to the chairman, Gen. Mark A. Milley, Ms. Pelosi appeared to be seeking to have the Pentagon leadership essentially remove Mr. Trump from his authorities as the commander in chief,” the Times reported. “That could be accomplished by ignoring the president’s orders or slowing them by questioning whether they were issued legally.”

As the U.S. struggles with dissension and chaos in the military ranks, Russia and China are waiting in the wings, building up their nuclear weapons capabilities lest an opportunity present itself to strike.