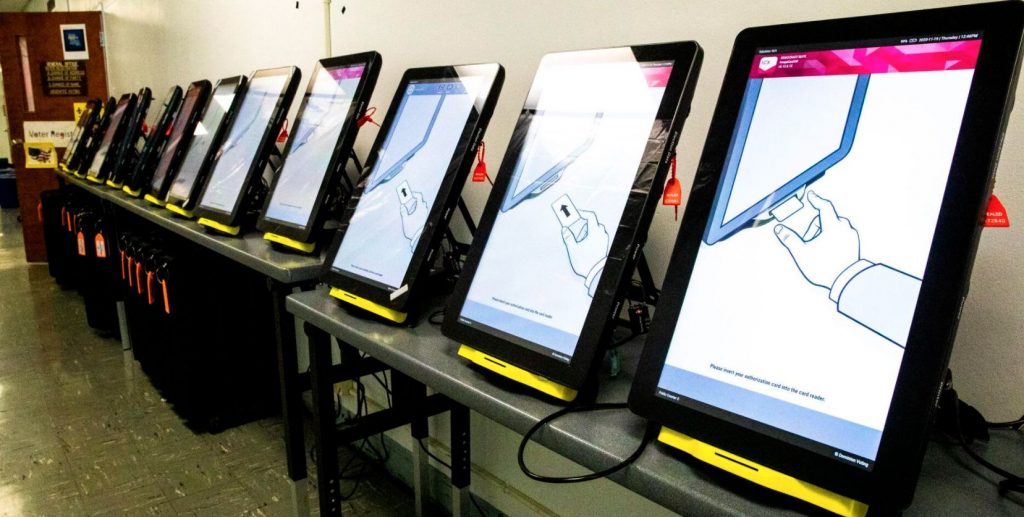 Now they want audits. A “security breach” impacting the California recall election has officials calling for “rigorous audits” to ensure that the results are legitimate.

The ‘security breach’? Mike Lindell’s Cyber Imposium actually leaked copies of Dominion Voting System’s proprietary Election Management System (EMS). This is an unauthorized form of ‘transparency’ that election officials are not in the least bit interested in. The Associated Press reported on the election security breach.

“A group of election security experts on Thursday called for a rigorous audit of the upcoming recall election for California’s governor after copies of systems used to run elections across the country were released publicly,” the AP reported. “Their letter sent to the secretary of state’s office urges the state to conduct a type of post-election audit that can help detect malicious attempts to interfere.”

“The statewide recall targeting Democratic Gov. Gavin Newsom, set for Sept. 14, is the first election since copies of Dominion Voting Systems’ election management system were distributed last month at an event organized by MyPillow CEO Mike Lindell, an ally of former President Donald Trump who has made unsubstantiated claims about last year’s election,” the AP continued. “Election offices across 30 states use the Dominion system, including 40 counties in California.”

The letter was endorsed by eight election security officials, including prominent authority figure Harri Hursti. It was sent to California’s Secretary of State Dr. Shirley Weber. The letter is provided in full below.

Experts Letter to CA SoS Re… by Kyle Becker

“As you know, about three weeks ago, binary images of the Dominion election management system (EMS) were made public,” the letter states. “While the software versions are not identical to those used in California, differences are relatively minor: the release materially elevates threats to the trustworthiness of the ongoing California recall election and to public trust in the election. We urge you to address the issue by taking one critical action – a statewide risk-limiting audit (RLA) of trustworthy paper ballots – which can substantially mitigate these threats.”

“The illegal public release about three weeks ago of binary images of the Dominion election management system (EMS) software and its installation environment constitutes a serious threat to the recall election,” the officials wrote. “Two of the images came from Mesa County, Colorado, and one came from Antrim County, Michigan. Those images, which include the EMS and its installation environment, have been widely downloaded.”

“While it is prudent to assume that other nation states have had that software for a long time, thousands of other people with unknown affiliations, motives, and physical access to voting systems now have it also,” the letter continues. “That increases the risk of undetected outcome-changing cyber-attacks on California counties that use Dominion equipment and the risk of accusations of fraud and election manipulation which, without rigorous post-election auditing, would be impossible to disprove. While the versions of the Dominion software that were released are not identical to the versions used in California, they are closely related, so this security breach imperils California elections.”

The irony of these statements should be immediate: The election security experts admit that “other nations have had that software for a long time” (by extension, non-state actors might have it, as well). Furthermore, they state clearly “without rigorous post-election auditing, would be impossible to disprove.”

The most remarkable thing about the letter is that the election security officials proceed to shred Dominion Voting Systems’ vulnerabilities.

“Every complex software system has bugs and security flaws. Cybersecurity research has shown that election software has more than its share,” the election security experts write. “Since that software is usually kept proprietary and secret, however, relatively few people have had the opportunity to examine, instrument, and test it closely enough to find exploitable flaws.”

“This is now no longer the case, at least with Dominion software,” the letter continues. “As of August 2021, thousands of unknown people can study the code and find weaknesses to plan attacks on elections. The attacks can be deployed by non-technical accomplices, including voters, building maintenance personnel, and election workers. Unfortunately, even extensive pre election testing of the voting equipment may not deter or detect such attacks.”

The fascinating thing about such statements is that it obviously didn’t take a leak from Mike Lindell’s Cyber Symposium to put the EMS software “out there” for determined actors to get their hands on it. It is obvious that other actors may have had it prior to the 2020 election. It is not a “conspiracy theory.” The experts are implying it here in black and white; indeed, Harri Hursti was featured in the HBO series “Kill Chain” discussing such election vulnerabilities prior to the November election. The letter references another election security expert: Alex Halderman.

“The Dominion software from Antrim County has been studied in detail recently by University of Michigan computer science professor Alex Halderman, one of the nation’s foremost experts in voting system cybersecurity,” the letter continues. “While serving as an expert witness in the Curling v. Raffensperger lawsuit in federal court in Georgia, Prof. Halderman found very serious security vulnerabilities in the Dominion Ballot Marking Device (BMD) system, some of which would allow an ordinary voter to insert malware into a BMD during a voting session, with little likelihood of detection.”

“That malware could spread undetected to other voting machines and potentially to the central election management system (EMS) in the county,” the letter adds. “That EMS software is now in the hands of countless unauthorized people after the Mesa and Antrim releases. Prof. Halderman’s full report, dated July 1, 2021, is so sensitive that the Court in Curling v. Raffensperger ordered that it be sealed.”

“However, it is critical to recognize that the release of the Dominion software into the wild has increased the risk to the security of California elections to the point that emergency action is warranted,” the experts conclude.

It should be added there is nothing wrong with the “rigorous auditing” of elections. Indeed, audit away. But the selectivity of the demands for election audits is more than suspect. There should be election integrity at all times for all candidates in order to ensure that the American people’s voices are indeed heard.

All California Voters Can Download Ballots in the ‘Comfort of Their Own Home’ for Recall Election: Secretary of State