Leaked Ottawa Police and Royal Canadian Mounted Police messages show the depths of callousness and cruelty that have infected the Canadian police forces. 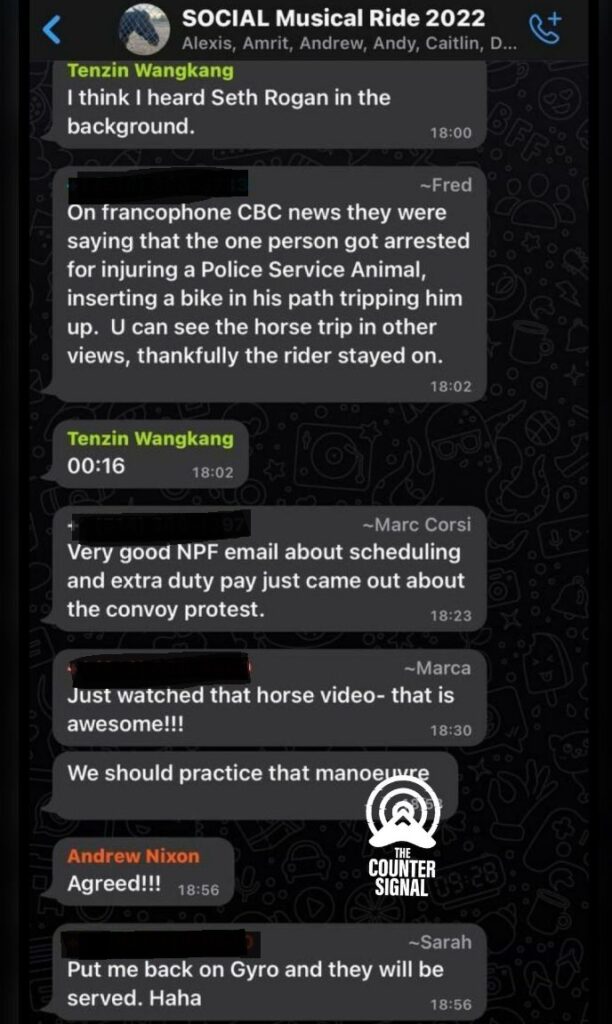 “On francophone CBC news they were saying that the one person got arrested for injuring a Police Service Animal, inserting a bike in his path tripping him up. U can see the horse trip in other views, thankfully the rider stayed on,” Fred wrote.

The officer is referring to an incident with a disabled elderly woman who was initially believed to be dead after harrowing video captured her being trampled by a police horse on Friday night.

This is disturbing. Is the woman with the walker trampled by Mounted Unit horses alive? Is she in surgery? Has ⁦@SIUOntario⁩ been notified? Do you have any concerns or comment ⁦@OttawaPolice⁩ ⁦@JustinTrudeau⁩ ⁦@fordnation⁩ ⁦@JimWatsonOttawa⁩ – Why? pic.twitter.com/X251vZiIaq

The Ottawa Police claimed that the woman threw her “bike” at law enforcement.

As this was happening a bicycle was thrown at the feet of one of the horses in an attempt to injure it. One person was arrested for intentionally harming a police service animal.

However, video shows that it was a disability scooter and it had nothing to do with the incident.

Police in Ottawa trampled protesters and then proceeded to defame the lady trampled by saying she threw her “bike” (disability scooter) at the horses. pic.twitter.com/yVj5P6tqrc

This is a closer look at the mobility scooter.

Ottawa police are claiming one of the trampled protesters was on a bike. Does this look like a bike or walking aid to you? pic.twitter.com/BYPMkLwXrI

Ottawa Police have also falsely claimed that no one was seriously injured.

“Just watched that horse video — that is awesome!!!” Marca replied.

“We should practice that manoeuvre,” she added. 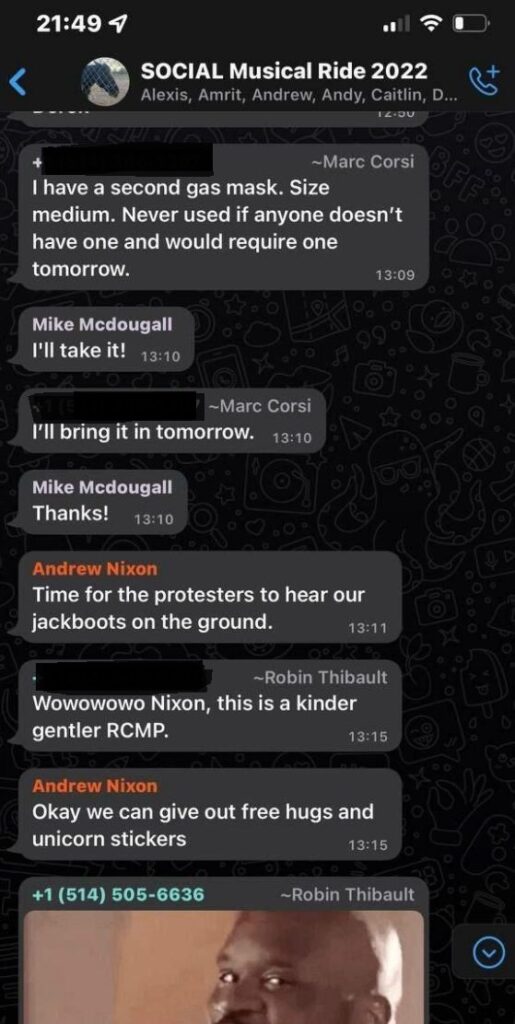 “I have a second gas mask,” Marc Corsi commented. “Never used if anyone doesn’t have one and would require one tomorrow.”

“Time for the protesters to hear our jackboots on the ground,” Andrew Nixon ominously remarked.

“Okay we can give out free hugs and unicorn stickers,” Nixon added sarcastically.

Then the crew celebrated the hard day of cracking down on peaceful protesters by having a few brews.

“Cheers crew! Here’s to some sweet OT (overtime) this weekend for our on call  members,” Nixon said. “Don’t kick all of them out until next weeks (sic) group gets our turn.” 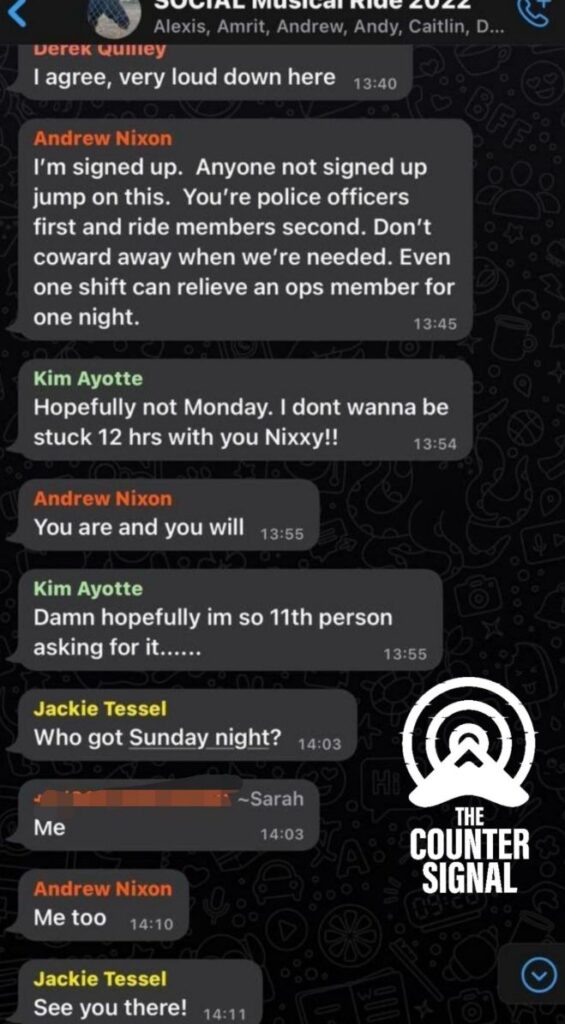 Nixon continued to exhort his fellow RCMP to get in on the ‘action.’

“I’m signed up,” he said. “Anyone not signed up jump on this. You’re police officers first and ride members second. Don’t coward away when we’re needed. Even one shift can relieve and ops member for one night.” 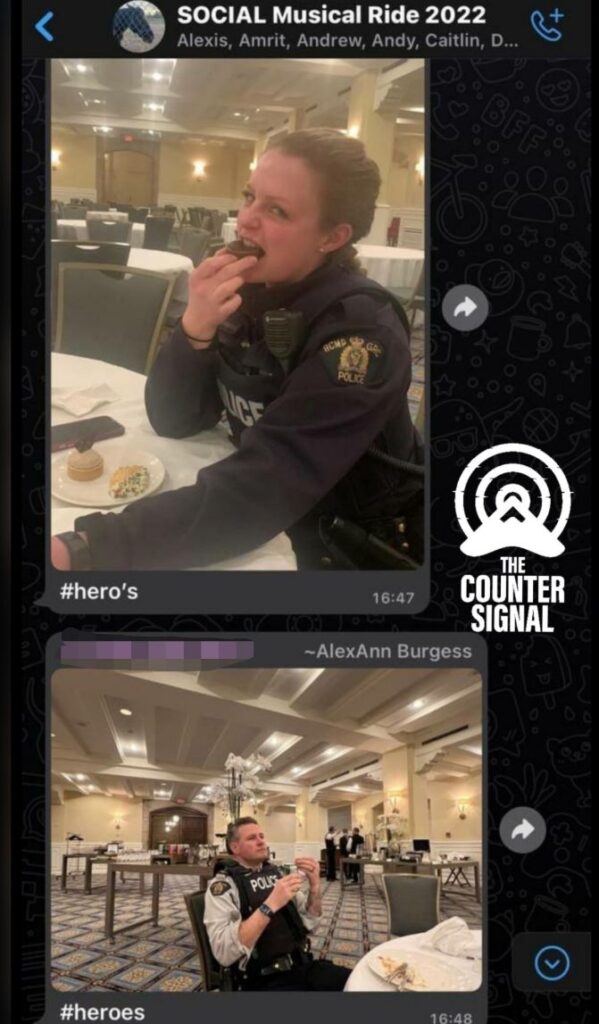 The officers showed how ‘disturbed’ they were at carrying out the brutal crackdowns. 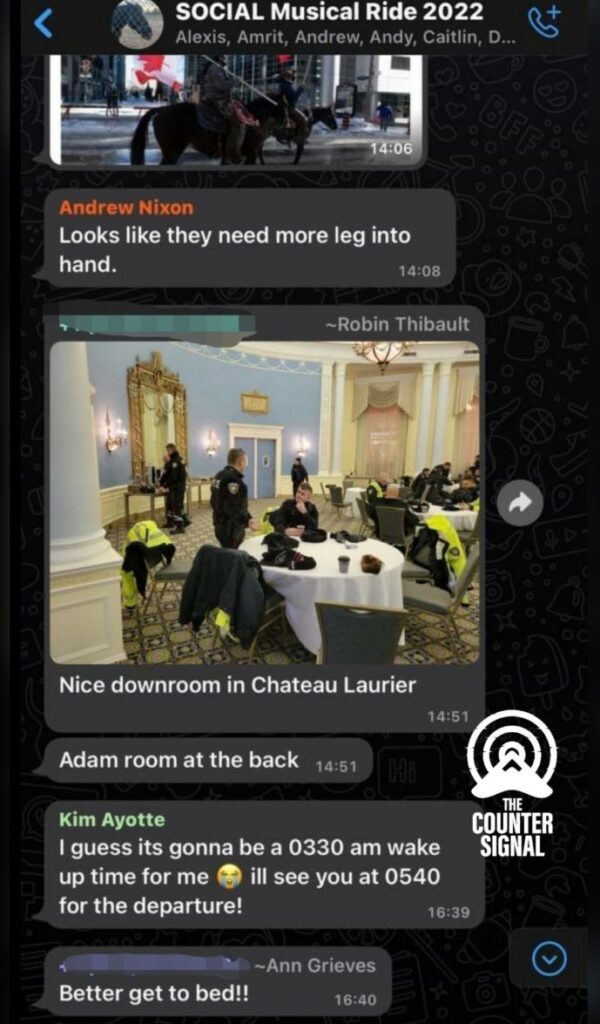 They had some chow at the Chateau Laurier. The police were obviously being rewarded for being Trudeau’s personal shock troops. 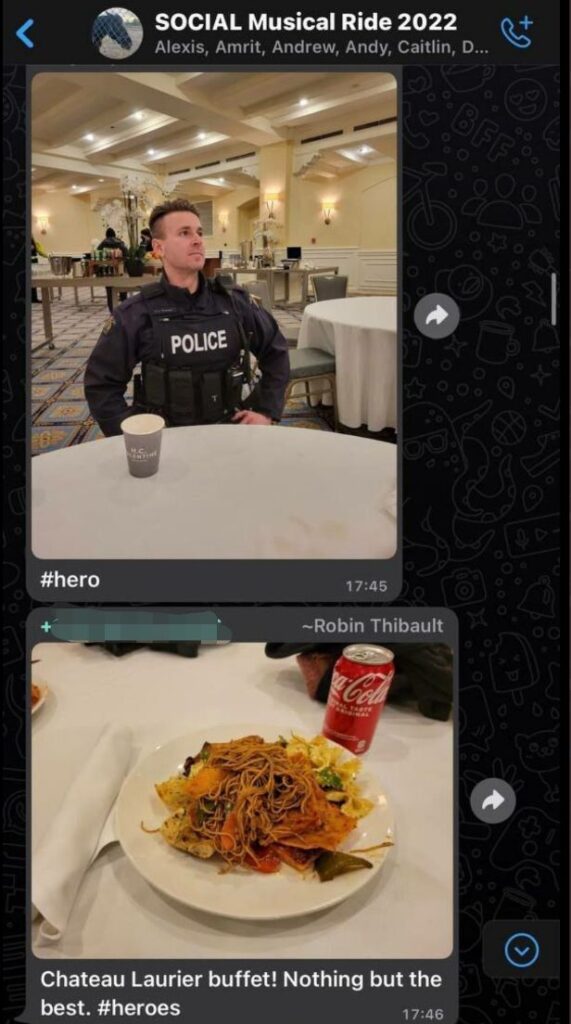 More pics of the Chateau Laurier buffet chow for the officers.

There is not a whiff of remorse or guilt for their suppression of Canadians’ rights and freedoms. None of them seem to be loyal to the Police Officers’ Oath or the Canadian Charter. 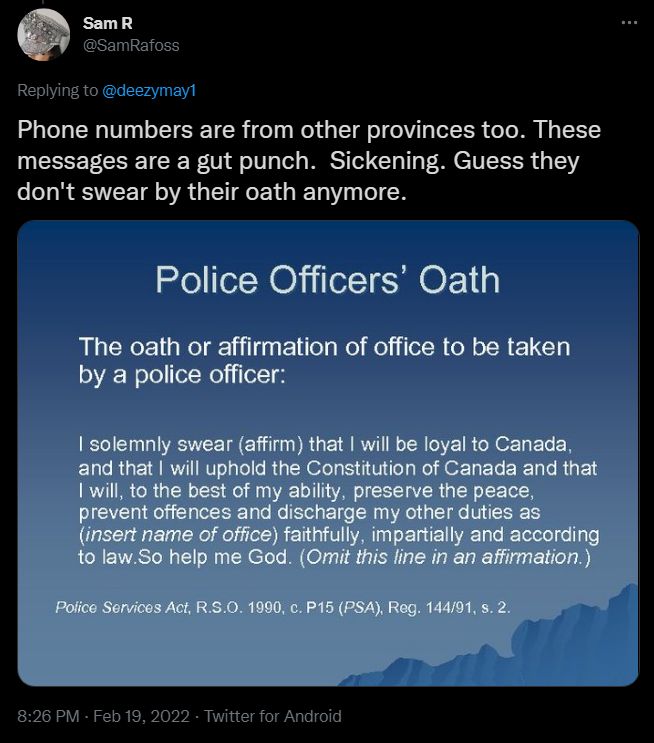 The Canadian Civil Liberties Association condemned the authoritarian crackdown against the protesters.

“The federal government has not met the threshold necessary to invoke the Emergencies Act,” the CCLA said on Twitter. “This law creates a high and clear standard for good reason: the Act allows government to bypass ordinary democratic processes. This standard has not been met.”

“The Emergencies Act can only be invoked when a situation ‘seriously threatens the ability of the Government of Canada to preserve the sovereignty, security and territorial integrity of Canada’ & when the situation ‘cannot be effectively dealt with under any other law of Canada’,” the CCLA went on.

“Governments regularly deal with difficult situations, and do so using powers granted to them by democratically elected representatives,” the CCLA added. “Emergency legislation should not be normalized. It threatens our democracy and our civil liberties.”

Over 100 people were arrested Friday and Saturday during the police crackdown on the Freedom Convoy protest. Unidentifiable officers in riot gear violently attacked the peaceful protesters, deployed tear gas, and an officer even trampled a disabled woman while on horseback. Fortunately, she has survived with a dislocated shoulder and is currently recovering in the hospital.