The Democratic Party will do anything to distract Americans from the disastrous Biden administration, even if that means risking World War III.

Zelensky shook hands with the congressional members before leading them inside for pictures with the delegation. 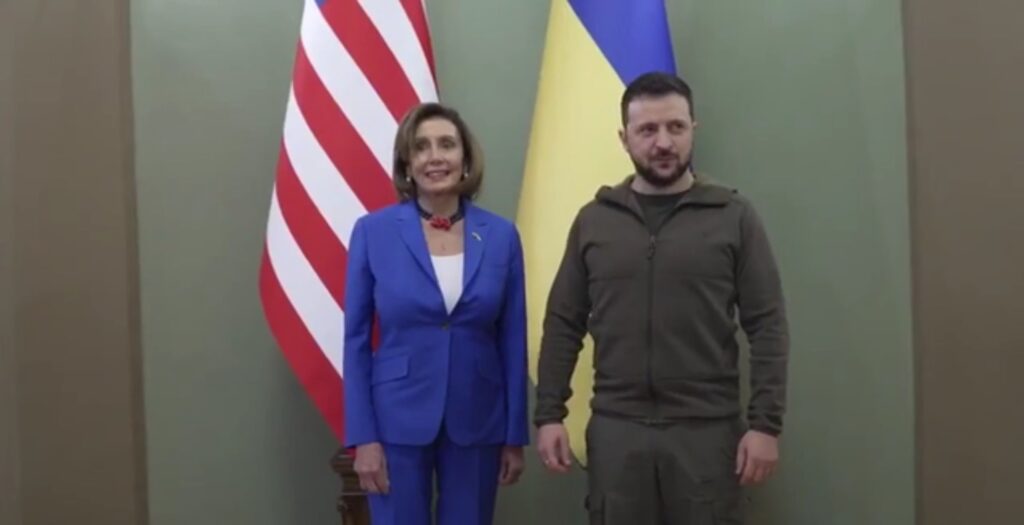 Zelensky’s photo op with Speaker Pelosi showed the leaders with rigid poses and poor eye contact. The visit appeared to be awkward and rushed.

The delegation to Ukraine also contained some of the key figures in the Trump-Russia collusion hoax, as well as those who led the phony impeachment against Donald Trump for seeking potential evidence of corrupt Biden family ties.

“We believe that we are visiting you to say thank you for your fight for freedom,” Pelosi told the Ukrainian president. “We are on a frontier of freedom and your fight is a fight for everyone. Our commitment is to be there for you until the fight is done.”

Speaker Pelosi’s phrasing suggests there is more to the Ukraine-Russia war than meets the eye; the U.S. elites consider it to be indicative of a global struggle of ideological significance.

The House on Thursday approved the Ukraine Democracy Defense Lend-Lease Act of 2022 by a vote of 417-10. The Senate had passed it by unanimous consent earlier this month.

This lend-lease bill is a variation of the World War II policy that lent arms on demand to the United Kingdom and other allies to fight the Nazis. The bill is a significant escalation of American involvement in Ukraine tantamount to fighting a proxy war against Russia, whose leader Vladimir Putin has repeatedly threatened nuclear retaliation against the West.

“We have heard clearly from Ukrainian President Zelenskyy: Ukraine desperately needs more military aid to sustain its fight for sovereignty and defend its civilian population,” said Rep. John Katko, one of the bill’s cosponsors. “I cosponsored this bill and was proud to support it on the House floor because it will expand our nation’s ability to expeditiously deliver additional defense articles to the government of Ukraine as they fight back against Vladimir Putin’s barbaric and unlawful invasion. This is a necessary step to protect the future of Ukraine and the safety of its people.”

Ukrainian president Zelensky has rejected all peace deals from Russia that would include a declaration of neutrality, a promise to never join NATO, a recognition of Crimea as Russian, and allowing Eastern, Russian-speaking territories to declare independence.