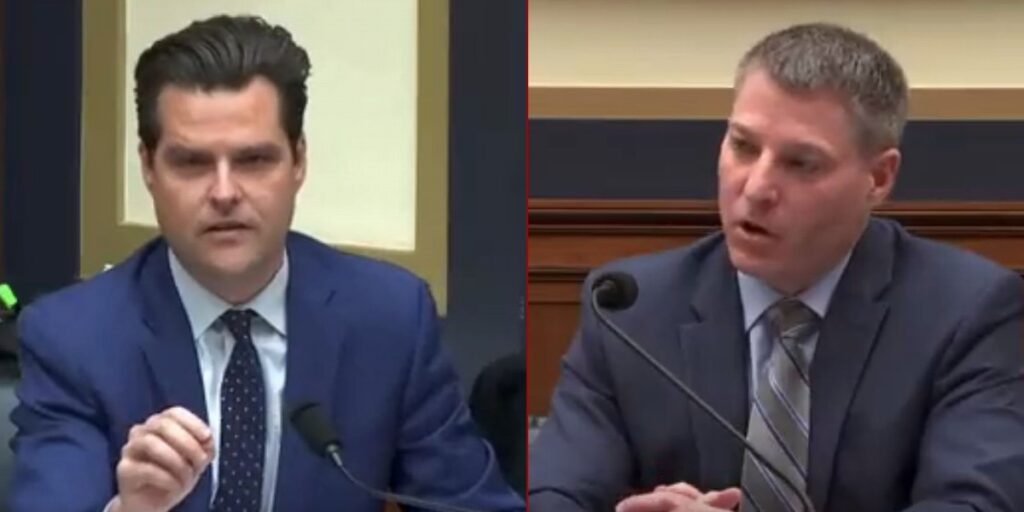 The U.S. media is turning a blind eye to the growing evidence that Hunter Biden has compromised the President of the United States in corrupt international business dealings in Ukraine and communist China.

It turns out that the Federal Bureau of Investigation is turning a blind eye to the national scandal, as well.

Rep. Matt Gaetz (R-FL) on Tuesday grilled the FBI’s assistant head of the cyber division Bryan Vorndran in front of the House Judiciary Committee over the massive developing scandal taking place on his agency’s watch.

GAETZ: So, where is it? The laptop.

GAETZ: You are the assistant director of FBI cyber. I want to know where Hunter Biden’s laptop is. Where is it?

GAETZ: That is astonishing to me is. Has FBI cyber assessed whether or not Hunter Biden’s laptop could be a point of vulnerability allowing America’s enemies to hurt our country?

VORNDRAN: Sir, the FBI cyber program is based off of what’s codified in Title 18, or Title 18 Section 1030, a code, which talks about computer intrusions, right? Using nefarious intent network.

GAETZ: You talked about passwords here. I mean, Hunter Biden’s password on his laptop was HUNTER02. He drops it off at a repair store. I’m holding the receipt from Mac’s computer repair, where in December 2019, they turned over this laptop to the FBI. And what now you’re telling me right here is that as the assistant director of FBI cyber, you don’t know where this is after it was turned over to you three years ago?

GAETZ: How are Americans supposed to trust that you can protect us from the next colonial pipeline, if it seems that you can’t locate a laptop that was give to you three years ago from the First Family potentially creating vulnerabilities for our country?

VORNDRAN: Sure. It’s it is not in the purview of my investigative responsibilities.

GAETZ: But, but that is shocking that, that you wouldn’t as the assistant director of cyber know whether or not there are international business deals, kickbacks, shakedowns that are on this laptop, that would make the First Family suspect to, to some sort of compromise. Mr. Assistant Director, have you assessed whether or not the first family is compromised as a result of the Hunter Biden laptop?

VORNDRAN: Sir, as a representative of the FBI cyber program is not in the realm of my responsibilities to deal with the questions that you’re asking me.

GAETZ: Has anyone at FBI cyber been asked to make assessments? Whether or not the laptop creates a point of vulnerability?

VORNDRAN: Sir, we have multiple lines of investigative responsibility in the FBI. They’re all available on public source.

GAETZ: I would think you’d know this one. I mean, I would think that if the president’s son, who does international business deals, referencing the now-president with the Chinese, with Ukrainians, I mean, have you assessed whether or not the Hunter Biden laptop gives Russia the ability to harm our country?

VORNDRAN: Sir, again, We can do this back and forth for the next couple minutes. I don’t have any information about the Hunter Biden laptop or the investigation…

GAETZ: You, I mean, you’re the assistant director of FBI cyber…

VORNDRAN: By my, by the block and line chart? No, sir, I should not.

GAETZ: Who should, who should we put in that chair to ask questions about this laptop that FBI has had for three years?

VORNDRAN: Sir? I’m not I’m I’m not in a position to make a recommendation who should sit here…

GAETZ: Should say so you don’t have it. You don’t know who has it. You don’t know where it is. You’re the assistant director, you know, earlier you talked about whether or not you were the Grant Hill or the Christian Laettner. It sounds like you’re the Chris Weber trying to call a timeout when you don’t have one. So who is it? Do you even know who has it, do you know who we should put in that chair to ask these questions to?

GAETZ: Well, it, could you find out and tell us, you’re going to have to give us briefings thanks to Mr. Lieu and Mr. Massie’s question about whether or not the FBI was taking a $5 million test drive on the Pegasus system that was being used to target people in politics, people in government, people in the media, people in American life. So will you commit to give us a briefing us the assistant director of FBI cyber as to where the laptop is? Whether or not it’s a point of vulnerability, whether or not the American people should wonder whether or not the first family is compromised?

VORNDRAN: Sir, I’d be happy to take your request back to our office.

GAETZ: Gosh. I mean, will you advocate for that briefing? As… you will?

VORNDRAN: I will be happy to take your request back to the FBI headquarters.

GAETZ: Well, will you, do you believe that that is a briefing that the Congress is, is worthy of having? I guess.

VORNDRAN: Sir, I’m not going to answer that question. Right? I’m here to talk the invitation. The invitation says oversight of the FBI cyber division. It does not say anything about…

GAETZ: Well, right, but I mean, this is, this is a cyber asset.

VORNDRAN: It is not a cyber asset.

The FBI very well know if the Biden family is compromised. But no FBI official is going to want to talk about the President of the United States being exposed to international corruption and foreign influence due to the illicit activities of both of his sons.

As a Rasmussen poll recently showed, “Nearly two-thirds of voters say the story of Hunter Biden’s lost laptop is important and believe President Joe Biden was probably involved in his son’s foreign business deals.” That seems like an issue worthy of an FBI investigation, and not a four-year Russia collusion witch hunt based on known political opposition research.