AOC Called Out for Texas Charity Drive While Her District is Ravaged by COVID Deaths, Poverty

Alexandria-Ocasio Cortez is not letting a crisis go to waste.

While the New York congresswoman has been fixated on the “Texas freeze,” her constituents back home in Queens and the Bronx are being frozen out of much-needed leadership on the coronavirus pandemic.

The Bronx has been grappling with poverty and a pandemic that has led to the borough having the the highest case fatality rate in New York City.

“We don’t see anyone coming to our rescue,” said Mychal Johnson, co-founder of the community organization South Bronx Unite, in a ABC News report published in 2020. “The community residents here are pretty much living in shock.”

On Saturday, the Gothamist confirms the abysmal trends in the Bronx and Queens have been sustained throughout the entire pandemic.

The COVID-related per capita fatality rate in the Bronx is currently the highest in New York City. 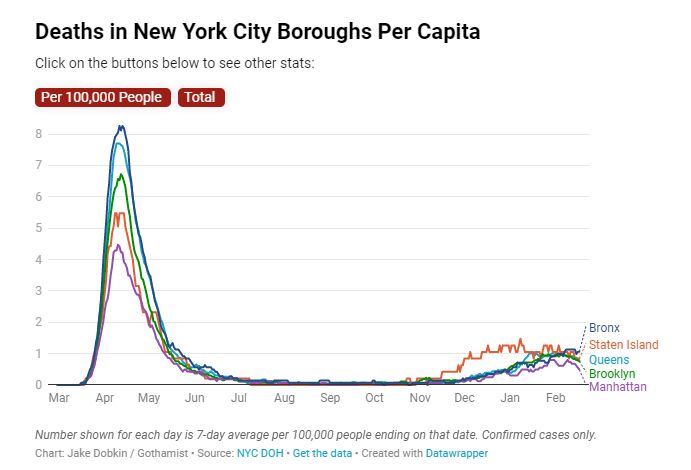 The positivity rates in the Bronx and Queens are also the highest of any of the other boroughs. 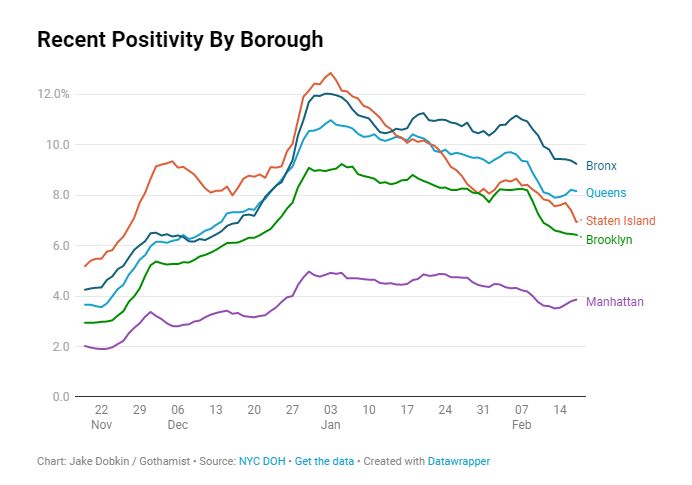 “It’s really been an unprecedented experience for me and I’ve been in medicine for 24 years,” said Bronx doctor Dr. Ernest Patti in the prior ABC News reportage. “You felt helpless.”

The systemic issues in the Bronx, which has been represented by Democrats for nearly three decades, are as much about deep-rooted poverty as about the recent coronavirus crisis.

“The situation in the Bronx with respect to COVID is really about the reality before COVID,” said Diana Hernandez, a public health expert from the Bronx. “The [Bronx] population is more invisible and more dispensable, which is to me so unfair,” she added. 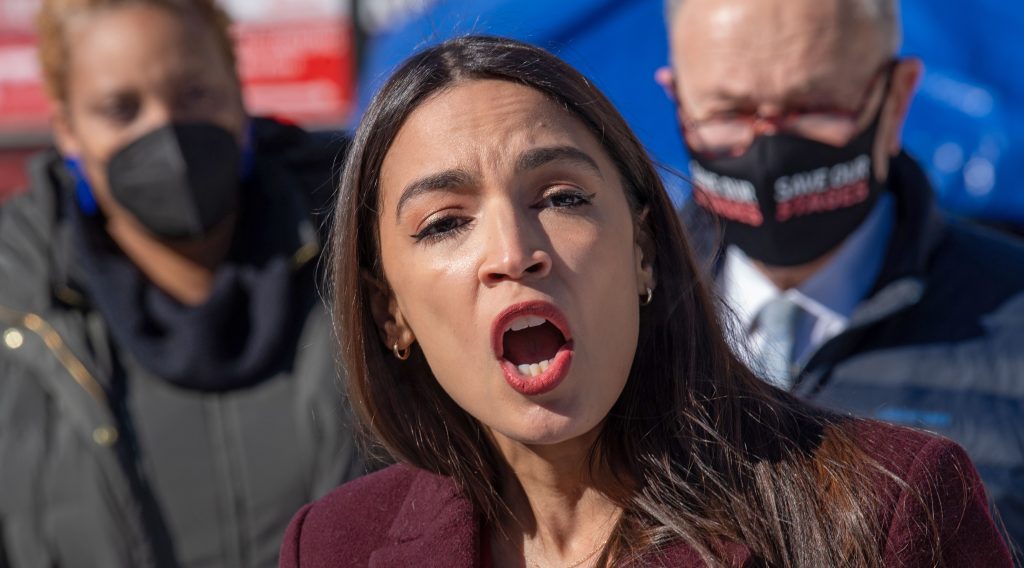 AOC has nonetheless done a remarkable job of being extremely visible. She has harnessed her dedicated fanbase to raise millions of dollars for those impacted by the terrible “Texas freeze,” which has been accompanied by rolling blackouts due partly to the state’s wind-driven Green New Deal-like agenda that she endorses enthusiastically.

The high-profile Democratic congresswoman has thus far raised over $4 million for the affected denizens of Texas. But people in her own district must be wondering: What about us?

Ocasio-Cortez personally flew to Texas on Friday to meet other Democrat representatives, such as Sylvia Garcia, Al Green and Sheila Jackson-Lee. The photo op went as it typically goes: AOC is showing compassion, thus veiling any ostensible political motives.

AOC is doing the “right thing”: But is it for the wrong reasons?

The charity drive has been accompanied by attacks on Texas Senator Ted Cruz, who is facing an all-out barrage of hit pieces to slam his recent trip to extract his family members from the miserable Texas freeze conditions and drop them off in Cancun.

Cruz has been a frequent political target of AOC, since he objected to Biden electors on January 6th. This coincided with a pre-planned attack on the capitol by far-right, anarchist and even leftist extremist groups. AOC made the extreme accusation that Cruz “almost had me murdered.” She also demonized an unnamed police officer that came to rescue her by comparing him to a possible sexual predator.

Ocasio-Cortez predictably “pounced” on the Cruz news that he had evacuated his wife and children from Texas during the blackouts.

If Sen. Cruz had resigned back in January after helping gin up a violent insurrection that killed several people, he could’ve taken his vacation in peace. Texans should continue to demand his resignation.

But don’t blame me for this, my points are on Amtrak! 🚊 https://t.co/CAWCgtxQ73

She also made the baseless claim that Cruz helped “gin up a violent insurrection” by engaging in the legal and constitutional practice of objecting to electors, which Democrats themselves did after the 2000, 2004 and 2016 elections of Republican presidents.

AOC is also concurrently doing a public charity drive in Texas, while calling for a Texas senator’s resignation.

But unlike Rep. Ocasio-Cortez, it appears that Senator Cruz actually did his job.

This is what Politico had to report on Friday about Ted Cruz’s actions in the wake of the blanket Cancungate coverage:

“In Cruz’s defense, the situation in Texas was much improved Thursday, through the big concern went from power outages to water safety, per the AP: ‘In Texas on Thursday, about 325,000 homes and businesses remained without power, down from about 3 million a day earlier, though utility officials said limited rolling blackouts were still possible.”

“Also in Cruz’s defense, The Texas Tribune notes that Cruz and his Texas colleague John Cornyn had requested and received a federal disaster declaration, which is the main thing a senator is good for at this stage (though other electeds are doing a lot more),” the report continued.

Let this be said definitively and once-and-for-all: If this were a Democrat evacuating his kids from a disaster-zone, this would be the non-story of non-stories. Cruz nevertheless apologized.

“In hindsight, I wouldn’t have done it. I was trying to be a dad and all of us have made decisions, when you have two girls who have been cold for two days and haven’t had heat or power and they’re saying ‘Hey look, we don’t have school, let’s get out of here,'” Cruz told reporters. “As I said, really from the moment I sat on the plane, I began really second-guessing that decision.”

But no one in the mainstream media is “second-guessing” AOC’s motives. The public reaction to her Texas charity drive has been predominately laudatory.

.@AOC, who represents the Bronx and Queens, has now raised $2 million in relief for Texas. She’s also flying there today to help distribute supplies.

She’s doing the job that Ted Cruz refuses to do.

Congresswoman AOC, who represents parts of the Bronx and Queens in NYC, more than 1,500 miles away, is doing a hell of a lot more for vulnerable Texans than Texas Senator Ted Cruz. https://t.co/HY8SOwZlzW

@AOC , a democratic representative for the Bronx and Queens is here at the Houston food bank herself helping and feeding those in need. She will be here doing so while our own republican representatives that Texas voted into office does nothing but make things worse

Meanwhile, various political observers noted that the congresswoman seems to be much less concerned about the ongoing disaster in the Queens and the Bronx. 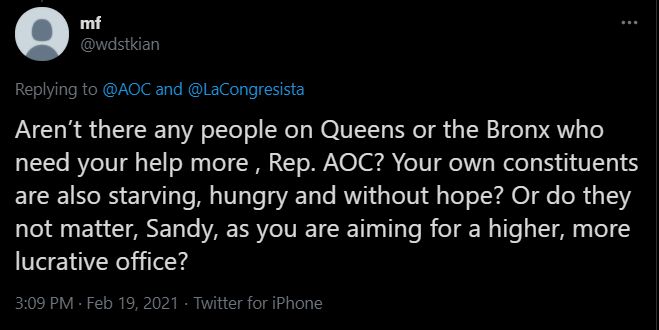 While others bluntly told the New York representative to go home:

Meanwhile, AOC is doing other things to distract from her failed leadership in her home district. She has called for an “investigation” into Governor Cuomo’s nursing home scandal, when she did nothing to politically oppose his deadly March 2020 executive order that has been tied to thousands of deaths.

“I support our state’s return to co-equal governance and stand with our local officials calling for a full investigation of the Cuomo administration’s handling of nursing homes during COVID-19,” Ocasio-Cortez said in a statement. “Thousands of vulnerable New Yorkers lost their lives in nursing homes throughout the pandemic. Their loved ones and the public deserve answers and transparency from their elected leadership, and the Secretary to the Governor’s remarks warrant a full investigation.”

It is important to note that this devastating mismanagement was entirely predictable, and the cover-up of the nursing home data was known since May of last year.

Rep. Ocasio-Cortez has been accused of being absent without leave in her own district numerous times before.

“I thought AOC would be our savior, but that’s not the case,” local activist Roxanne Delgado told the New York Post in a 2019 report.

“She has to address these local issues. Her district is everywhere else in the US. Her heart is not in the Bronx,” said Anthony Vitaliano, a former police officer and community board member.

It is clearly demonstrable that she effectively never did address the systemic issues for her own district. If she can’t even get her own backyard right with her radical policies, then how can she “save” America with socialism?

Although Alexandria Ocasio-Cortez may be a “winner” in much of the national media and on social media, there is little evidence that her radical views will lead to wins for the Democratic Party nationwide.

The Green New Deal that AOC has been famous for pushing is based on a non-quantified, therefore unfalsifiable article of faith that we must “do something” or we will all be doomed in years (no, decades). It is an open checkbook to the radical left that is not contingent upon any real-world results.

America is now witnessing what happens when a state adopts a Green New Deal agenda.

It is not that alternative energy sources and energy diversification are bad; the issue is that many of the technologies are not yet supported by natural market forces. We are seeing real-world results in Texas when a significant amount of the state’s energy grid is fueled by unreliable wind power, instead of more clean-burning natural gas and nuclear power.

“This shows how the Green New Deal would be a deadly deal for the United States of America,” Texas Governor Abbott said to host Sean Hannity on Tuesday. “Our wind and our solar got shut down, and they were collectively more than 10 percent of our power grid, and that thrust Texas into a situation where it was lacking power on a statewide basis. … It just shows that fossil fuel is necessary.”

But Ocasio-Cortez vehemently denies that the Green New Deal has anything to do with the disastrous situation in Texas.

“The infrastructure failures in Texas are quite literally what happens when you *don’t* pursue a Green New Deal,” AOC nonsensically tweeted on Wednesday.

Alex Epstein, founder of the Center for Industrial Progress, cited the EIA to show how wind power’s unreliability played a part in the Texas rolling blackouts.

Here's the latest chart on what happened in TX.

Imagine that, instead of focusing its resources on unreliable wind and solar (green and yellow) TX had focused on the resiliency best-practices that enable nuclear, coal, and gas to thrive in cold/snowy weather around the world. pic.twitter.com/WHR2tWhzti

“Is any platform fact-checking [AOC’s] claim that the GND is the solution to TX? Let me help,” he tweeted. “The GND calls for mandating wind/solar and eliminating natural gas, coal, and nuclear. Look how wind/solar have performed in the last week,” he wrote, sharing a graph of Texas’ renewable energy drop during the storm.

“Under the [Green New Deal] millions would have died,” Epstein continued.

Turn Texas “green” and maybe it will turn Texas “blue.” The recent Texas freeze will do much to dispel this deadly miscalculation.

The best form of “charity” that AOC can do for the United States is to renounce the Green New Deal.