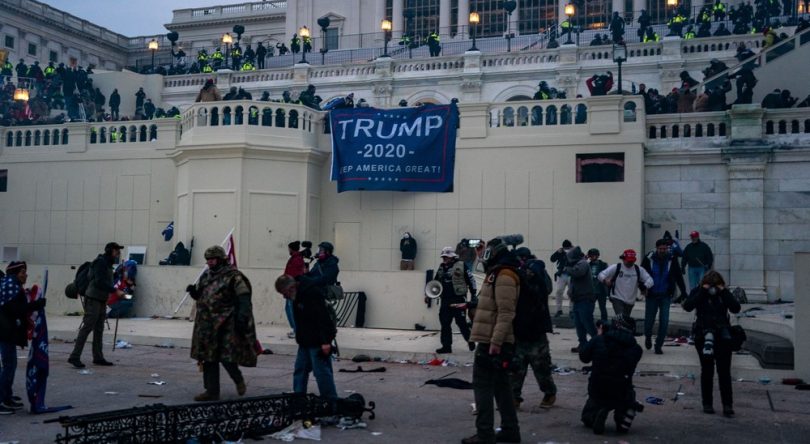 At least one undercover agent was working the extremist groups that would show up at the Capitol on January 6th, new court documents reveal. The revelation was disclosed in an affidavit accompanying criminal charges against Fi Duong.

“An accused U.S. Capitol protester spoke with an undercover Washington police officer on Jan. 6 who later connected the man to an undercover FBI worker,” the Epoch Times reported.

“On the morning of January 6, 2021, Fi Duong and an associate of his (Associate 1) introduced themselves to a Metropolitan Police Department Undercover Employee (MPD UCE) in the vicinity of Freedom Plaza, Washington, D.C,” the criminal complaint states. “Duong asked the MPD UCE if he/she was a ‘patriot,’ to which the MPD UCE responded in the affirmative and asked Duong the same question. Duong responded by claiming to be an ‘operator’.”

“Later that afternoon, the MPD UCE observed Duong kneeling by a marble fence on the West Terrace of the U.S. Capitol building, past the line of police officers and the construction scaffolding which were in place on January 6, 2021,” the statement continued. “The location where Duong was observed is known to be within what was a restricted zone on January 6, 2021. Duong and the MPD UCE exchanged greetings to one another but did not communicate further. Duong did not appear to be interacting with anyone else.”

The criminal complaint, filed by FBI special agent Jason Jankovitz, provides details on the FBI’s monitoring of Duong and a “Bible study” group that served as a front group.

The Washington Post’s report on Duong notes in passing that this may be the first time that an undercover FBI agent was confirmed as working an extremist group.

“Fi Duong, 27, appeared in court Friday and was released to home confinement pending trial, over the objections of prosecutors who sought stricter terms,” the Post notes.”According to the court record, at the time of his arrest he had several guns, including an AK-47, and the material to make 50 molotov cocktails. Details of the case — one of the first if not the first in which the government publicly disclosed it had someone undercover to continue monitoring a Jan. 6 defendant — were made public Tuesday.”

“During the same meeting, Duong allegedly said he was in Washington on Jan. 6 and that he was dressed that day in all-black to try to look like a member of Antifa, a far-left, anarcho-communist network that has carried out violence in the United States,” WaPo reported.

It also came out in the criminal complaint that multiple FBI agents were involved in working Duong and his associates.

“Duong added the FBI undercover agent to an encrypted messaging platform chat room and on Jan. 18, the agent asked if he was ‘masked up in the Capitol’,” the Epoch Times reported. “Duong answered yes, and said he was aware that people were being arrested for being inside the Capitol. He later described himself as ‘documenting’ what took place in the building.”

“The agent in February met with Duong and other members of the group for a Bible study and on other occasions participated in other meetings, including one on June 9,” the Times added. “The group soon started to surveil the Capitol, according to the undercover worker. At one point, the FBI agent and Duong met with another undercover FBI agent at the site of a former jail, where Duong allegedly wanted to test Molotov cocktails he’d constructed.”

Duong also told the undercover agent his family spent two generations “running from communists,” first in China and then Vietnam, and he added “you just gotta make a stand.”

“The FBI had sources in that crowd, confidential sources, that’s 100% certain,” Tucker accurately said in June, before adding, “But it is not just political protest the government is spying on.”

“But unfortunately, they do and in this case, they did,” Tucker continued. It turns out, once again, that he was right. Interestingly, Fi Duong was not charged with any violent crime, but may receive up to 20 years for ‘obstructing an official proceeding.’

“Fi Duong, 27, was released to home confinement on Friday after facing multiple charges, including disorderly conduct and obstruction of an official proceeding tied to the riot,” the Insider reported.

The question, once again, is not about the FBI doing its job by infiltrating extremist groups, but why its agents did little or nothing to prevent them from assailing the Capitol building.

When combined with the intelligence failures, ‘stand down‘ orders issued to the Capitol Police and National Guard, and publicly available video showing Capitol Police opening the doors to protesters, the entire picture of how January 6 continues to be murky. Unfortunately, Pelosi’s partisan select committee is highly unlikely to give Americans the whole truth.

Correction: This article clarifies the known affiliation of the undercover agent as a member of the MPD.

BREAKING: NSA Effectively Confirms Through Media Leak That Tucker Carlson Was Spied On