Delta employees are circulating a ‘scathing’ anonymous letter that was obtained by Dr. Karlyn Borysenko, who shared it on social media and in a podcast.

The letter, signed by a 20+ years Delta Airlines Employee, was posted online. It is called “Ed Bastian and Death of Reason at Delta Airlines” in a reference to the company’s “Woke” CEO. The letter will be transcribed below: 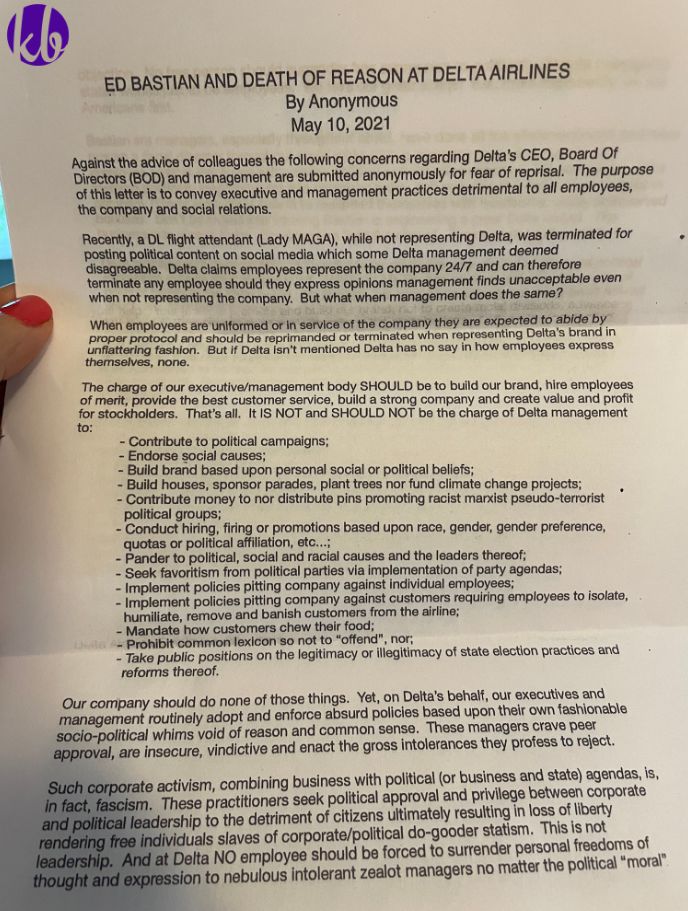 “Against the advice of colleagues the following concerns regarding Delta’s CEO, Board of Directors (BOD) and management are submitted anonymously for fear of reprisal,” the letter begins. “The purpose of this letter is to convey executive and management practices detrimental to all employees, the company and social relations.”

“Recently, a DL flight attendant (Lady MAGA), while not representing Delta, was terminated for posting political content on social media which some Delta management deemed disagreeable,” it continues. “Delta claims employees represent the company 24/7 and can therefore terminate any employee should they express opinions management finds unacceptable even when not representing the company. But what when management does the same?”

“When employees are uniformed or in service of the company they are expected to abide by proper protocol and should be reprimanded or terminated when representing Delta’s brand in unflattering fashion,” the letter added. “But if Delta isn’t mentioned Delta has no say in how employees express themselves, none.”

“The change of our executive/management body SHOULD be to build our brand, hire employees of merit, provide the best customer service, build a strong company and create value and profit for stockholders,” it stated. “That’s all. It IS NOT and SHOULD NOT be the charge of Delta management to:

“Our company should do none of those things,” the letter went on. “Yet, on Delta’s behalf, our executives and management routinely adopt and enforce absurd policies based upon their own fashionable socio-political whims void of reason and common sense. These managers crave peer approval, are insecure, vindictive and enact their gross intolerances they profess to reject.”

“Such corporate activism, combining business with political (or business and state) agendas, is, in fact, fascism,” the letter says, definitively.

“These practicioners seek political approval and privilege between corporate and political leadership to the detriment of citzens ultimately resulting in loss of liberty rendering free individuals slaves of corporate/political do-gooder statism,” it continued. “This is not leadership. And at Delta NO employee should be forced to surrender personal freedoms of thought and expression to nebulous intolerant zealot managers no matter the political ‘moral’ objection. No free person should surrender free expression to politically illiterate managerial statist wonks just to be employees. We love our great airline. But, more importantly, we are Americans first.” 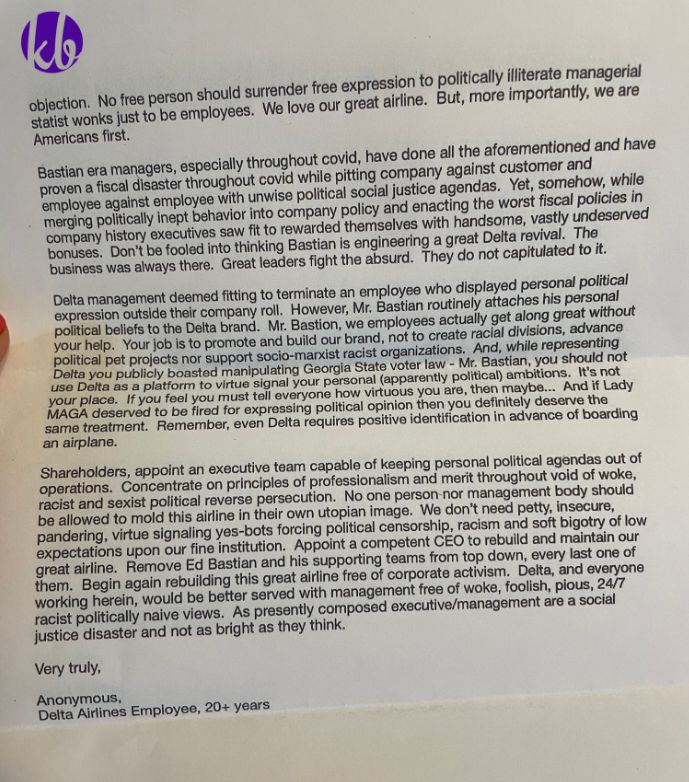 “Bastian era managers, especially throughout covid, have done all the aforementione and have proven a fiscal disaster throughout covid while pitting company against customer and employee against employee with unwise political social justice agendas,” the letter added. “Yet, somehow, while merging politically inept behavior into company policy and enacting the worst fiscal policies in company history executives saw fit to rewarded themselves with handsome, vastly underserved bonuses. Don’t be fooled into thinking Bastian is engineering a great Delta revival. The business was always there. Great leaders fight the absurd. They do not capitulated to it.”

“Delta management deemed fitting to terminate an employee who displayed personal political expression outsider their company roll,” it continued. “However, Mr. Bastian routinely attaches his personal political beliefs to the Delta brand. Mr. Bastian, we employees actually get along great without your help. Your job is to promote our brand, not to create racial divisions, advance political pet projects nor support socio-marxist racial organizations.”

“And, while representing Delta you publicly boasted manipulating Georgia State voter law – Mr. Bastian, you  should not use Delta as a plaform to virtue signal your personal (apparently, political) ambitions,” the letter went on. “It’s not your place. If you feel you must tell everyone how virtuous you are, then maybe… And if Lady MAGA deserved to be fired for expressing political opinion then you definitely deserve the same treatment. Reemember, even Delta requires positive identification in advance of boarding an airplane.”

“Shareholds, appoint an executive team capable of keeping personal political agendas out of operations,” it advised. “Concentrate on principles of professionalism and merit throughout void of woke, racist and sexist political reverse persecution. No one person or management body should be allowed to mold this airline in their own utopian image. We don’t need petty, insecure, pandering, virtue signaling yes-bots forcing political censorship, racism and soft bigotry of low expectations on our fine institution.”

“Appoint a competent CEO to rebuild and maintain our great airline,” the letter added. “Remove Ed Bastian and his supporting teams from top down, every last one of them. Begin again rebuilding this great airline free of corporate activism. Delta, and everyone working herein, would be better served with management free of woke, foolish, pious, 24/7 racist politically naive views. As presently composed executive/anagement are a social justice disaster and not as bright as they think.”

Delta Airlines was one of over 200 companies that blasted Georgia’s election integrity laws. In April, the Georgia House rewarded the company by stripping it of a $35 million tax break due to the CEO’s inappropriate social justice activism.

Dr. Borysenko commented on the letter in the video below:

The anonymous employee’s letter is much like the tip of a glacier. If one employee is willing to risk his employment by sending such a heated message to the company’s management, you can be sure that there are far more employees who would like to send it the same message.