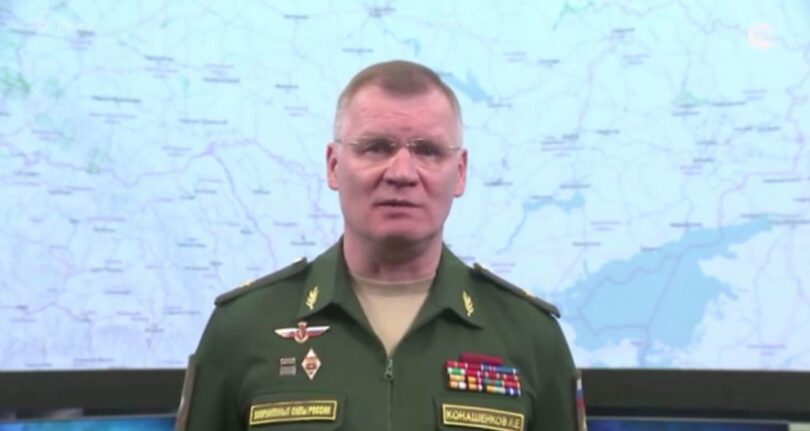 The Russian media outlet RIA Novosti released documents that the Ministry of Defense points to as evidence that Ukraine was undertaking research in U.S.-funded biolabs that has the capability to be used for bioweapons.

Major General Igor Konashenkov, an official representative of the Russian Ministry of Defense, provided the information to journalists. Moscow said that the documents, allegedly originating from employees of Ukrainian biological laboratories, confirmed that “components of biological weapons were being developed in Ukraine, in close proximity to Russian territory,” as reported by RIA Novosti. Watch:

“In the course of a special military operation, the facts of an emergency cleansing by the Kiev regime of traces of a military biological program being implemented in Ukraine, funded by the US Department of Defense, were uncovered,” Konashenkov said. 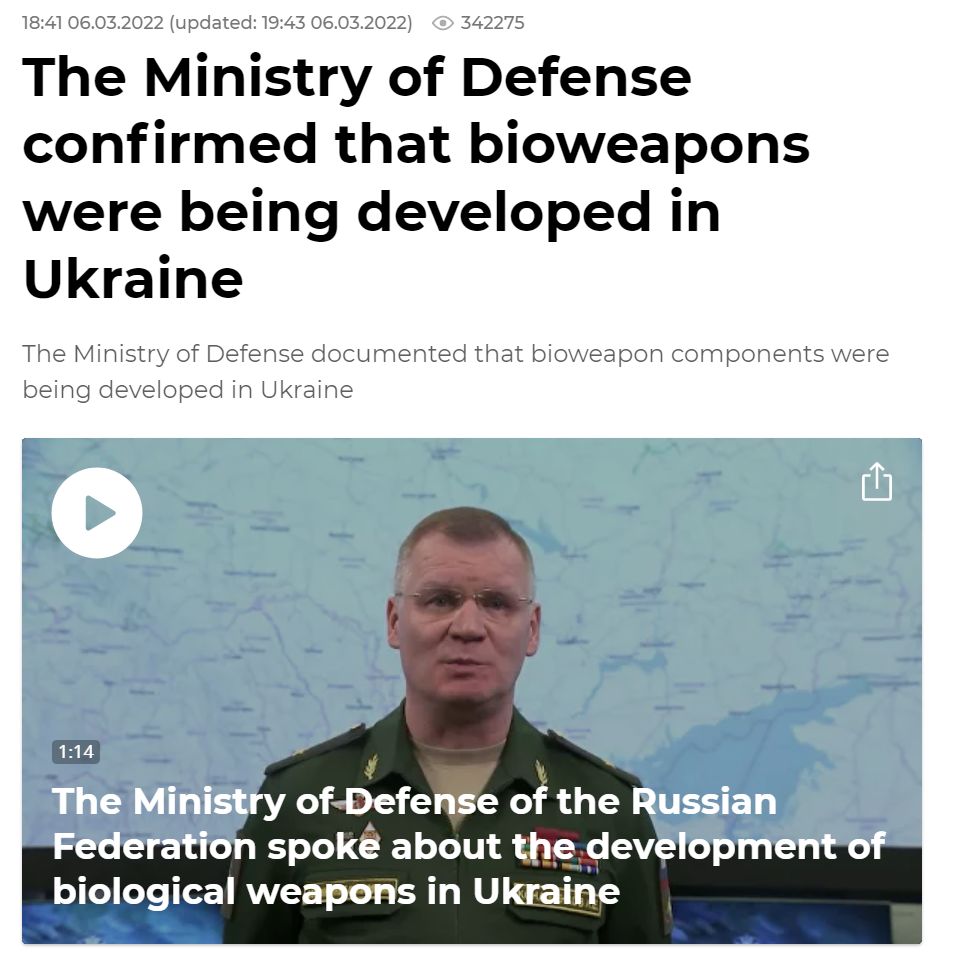 “We have received documentation from employees of Ukrainian biological laboratories on the emergency destruction of especially dangerous pathogens on February 24 — the causative agents of plague, anthrax, tularemia, cholera and other deadly diseases,” Konashenkov claimed.

The documents, with an exclusive translation via Becker News, follows below:

“The Ukrainian Minister of Health Security in connection with the introduction of martial law in Ukraine on February 24, 2022, according to the Ukrainian Presidential Order on 24.02.2022, No. 64/2022 requests to ensure the emergency destruction of biological pathogens used to ensure the quality management system of laboratories in the attached order: appendix on 2 sheets. in 1 approx.”

The document references Viktor Liashko, the Minister of Health in Ukraine.

“The order carrying out of emergency destruction of the biological pathogenic agents which are used for maintenance of system and quality management of laboratory in case of emergence of extraordinary military character”:

2. Determine the authorities responsible for the emergence of military emergencies;

3. Provide for the creation of reserves of funds for the emergency destruction of biological pathogens and in case of emergencies of a military nature.

3. [sic] Institutions that hold working sets of biological pathogens to ensure the quality management system of laboratory tests, must destroy them by disinfection (hereinafter – disinfection);

5. Disinfection of biological pathogens is carried out by autoclaving with mandatory compliance with the relevant regimes and control in accordance with the requirements of applicable regulations;

6. In the case where it is impossible to use an autoclave, disinfection of biological pathogens is carried out by appropriate disinfectants or by boiling;

7. The results of disinfection are entered in the control log, the work of air and steam (autoclave) sterilizers, form No. 257/0, approved by the order of the Ministry of Health of Ukraine of January 4, 2001 No. 1 “About the statement of the forms of the medical accounting documentation used in laboratories of medical and preventive institutions” (with changes).

8. Disposal of decontaminated material will be adjudicated in accordance with internal procedures approved by the institution.

Critically, the document then lists the cultures that are to be destroyed:

The document appears to be signed by the Head of Microbiological Laboratories, Karlivsky V.P., as well as by Nadiya Kushka, Lyubov Bobritska, Tetiyana Shebchenko, and Peter Vasiliev.

“Fact-checkers,” such as Snopes, have denied that there are ‘bioweapons’ laboratories in Ukraine that are ‘run’ by the United States. According to one “fact check” of a viral post on biolabs in Ukraine, “the Ministry of Health of Ukraine and the Department of Defense of the United States of America entered into an agreement in 2005, while Republican U.S. President George W. Bush was in office, to ‘stem the threat of bio-terrorism by placing safeguards on deadly pathogens dating from a Soviet-era biological weapons program,’ according to a contemporaneous news article in the Chicago Tribune. While the U.S. Defense Department’s Biological Threat Reduction Program provided some funding to upgrade biolabs in the Ukraine, these facilities are operated by the Ukrainian government under guidelines set under Ukrainian law.”

According to the SBU, in 2005 the Ministry of Health of Ukraine and the U.S. Department of Defense signed a framework agreement to prevent the spread of technologies, pathogens and knowledge that can be used in the development of biological weapons. As part of this Agreement, a number of state laboratories located in Odesa, Kharkiv, Lviv, Kyiv, Vinnytsia, Kherson, Dnipropetrovsk regions were modernized (repair work was carried out, equipment was updated, supplies were purchased, etc.).

“We emphasize that these laboratories are financed from the state budget, are subordinate to the Ministry of Health and the state service on food safety and consumer protection,” the SBU said.

The main issue with such ‘fact checkers’ is that they have dismissed any possibility that Covid-19 leaked from a Wuhan laboratory, whether accidentally or intentionally.

In February 2020, the prominent medical journal The Lancet published a letter signed by several scientists condemning “conspiracy theories” that the novel SARS-CoV-2 virus did not have a “natural origin.” The letter would be held up by media publications around the world as an authoritative statement closing off discussion and investigation of a potential virus leak from the Wuhan Institute of Virology.

The combative wording of the letter, published early on during the COVID-19 pandemic, should have been a red flag for media publications that there may be conflicts of interest at play.

A number of these scientists have since changed their position, the report shows.

The Lancet letter of Feb 18, 2020, sent a message to scientists the world over: Investigate a lab leak, and you will be tarred as conspiracy theorist. Was it a honest outpouring of support? Or astroturfing? To start, of the 27 signatories, 7 were affiliated with EcoHealth… 🧵 pic.twitter.com/XTyTB3CeyD

Furthermore, several of the signatories are connected to EcoHealth, the controversial scientific group that funneled millions in U.S. taxpayer money to the Wuhan laboratory. A document hosted at USASpending.Gov that shows the Department of Health and Human Services funded the Wuhan laboratory to the tune of $3.7 million:

The U.S. Embassy in Ukraine has published information about its “Biological Threat Reduction Program” in Ukraine:

The U.S. Department of Defense’s Biological Threat Reduction Program collaborates with partner countries to counter the threat of outbreaks (deliberate, accidental, or natural) of the world’s most dangerous infectious diseases.  The program accomplishes its bio-threat reduction mission through development of a bio-risk management culture; international research partnerships; and partner capacity for enhanced bio-security, bio-safety, and bio-surveillance measures. The Biological Threat Reduction Program’s priorities in Ukraine are to consolidate and secure pathogens and toxins of security concern and to continue to ensure Ukraine can detect and report outbreaks caused by dangerous pathogens before they pose security or stability threats.

Current executive agents of the Biological Threat Reduction Program in Ukraine are the Ministry of Health, the State Service of Ukraine for Food Safety and Consumer Protection, the National Academy of Agrarian Sciences, and the Ministry of Defense.

There are fact sheets on the U.S. Embassy in Ukraine website on the following laboratories (the links do not appear to be working).

There is no strong evidence of U.S. funded “bioweapons” research in Ukraine. Therefore, there is a possibility that this is Russian disinformation. But the U.S. embassy in Ukraine lists biological “threat reduction” laboratories, similar to the ones the U.S. funded in Wuhan. The readers can draw their own conclusions.