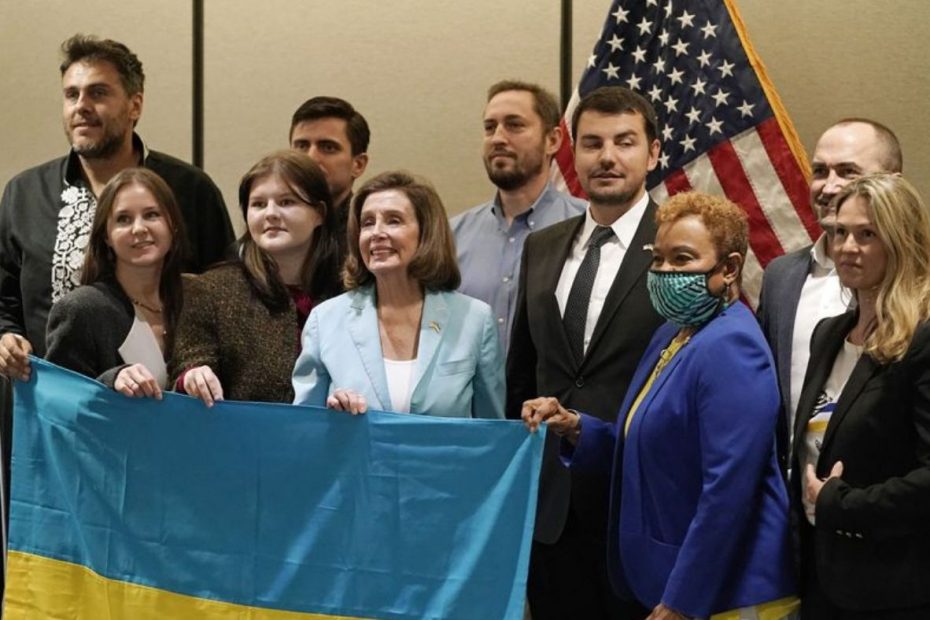 Thirty House Democrats have  sent a letter urging President Biden to shift his strategy on the Ukraine war and pursue direct negotiations with Russia ahead of the 2022 midterm elections. It is the first time that Democrats have pressured Biden to change his aggressive strategy to fund and defend Ukraine.

The letter concedes that Russia’s invasion is “outrageous” and “illegal,” but that it ultimately risks escalation and potentially, “World War III.”

“We write with appreciation for your commitment to Ukraine’s legitimate struggle against Russia’s war of aggression,” the House Democrats’ letter states. “Your support for the self-defense of an independent, sovereign, and democratic state has been supported by Congress, including through various appropriations of military, economic and humanitarian aid in furtherance of this cause. Your administration’s policy was critical to enable the Ukrainian people, through their courageous fighting and heroic sacrifices, to deal a historic military defeat to Russia, forcing Russia to dramatically scale back the stated goals of the invasion.”

“Crucially, you achieved this while also maintaining that it is imperative to avoid direct military conflict with Russia, which would lead to ‘World War III, something we must strive to prevent.’ The risk of nuclear weapons being used has been estimated to be higher now than at any time since the height of the Cold War,” the letter adds. “Given the catastrophic possibilities of nuclear escalation and miscalculation, which only increase the longer this war continues, we agree with your goal of avoiding direct military conflict as an overriding national-security priority. Given the destruction created by this war for Ukraine and the world, as well as the risk of catastrophic escalation, we also believe it is in the interests of Ukraine, the United States, and the world to avoid a prolonged conflict. For this reason, we urge you to pair the military and economic support the United States has provided to Ukraine with a proactive diplomatic push, redoubling efforts to seek a realistic framework for a ceasefire. This is consistent with your recognition that ‘there’s going to have to be a negotiated settlement here,’ and your concern that Vladimir Putin ‘doesn’t have a way out right now, and I’m trying to figure out what we do about that’.”

“We are under no illusions regarding the difficulties involved in engaging Russia given its outrageous and illegal invasion of Ukraine and its decision to make additional illegal annexations of Ukrainian territory,” the letter continues. “However, if there is a way to end the war while preserving a free and independent Ukraine, it is America’s responsibility to pursue every diplomatic avenue to support such a solution that is acceptable to the people of Ukraine. Such a framework would presumably include incentives to end hostilities, including some form of sanctions relief, and bring together the international community to establish security guarantees for a free and independent Ukraine that are acceptable for all parties, particularly Ukrainians. The alternative to diplomacy is protracted war, with both its attendant certainties and catastrophic and unknowable risks.”

“Russia’s invasion has caused incalculable harm for the people of Ukraine, leading to the deaths of countless thousands of civilians, Ukrainian soldiers, and displacement of 13 million people, while Russia’s recent seizure of cities in Ukraine’s east have led to the most pivotal moment in the conflict and the consolidation of Russian control over roughly 20 percent of Ukraine’s territory,” the letter goes on. “The conflict threatens an additional tens of millions more worldwide, as skyrocketing prices in wheat, fertilizer and fuel spark acute crises in global hunger and poverty. A war that is allowed to grind on for years—potentially escalating in intensity and geographic scope— threatens to displace, kill, and immiserate far more Ukrainians while causing hunger, poverty, and death around the world. The conflict has also contributed to elevated gas and food prices at home, fueling inflation and high oil prices for Americans in recent months. Economists believe that if the situation in Ukraine is stabilized, some of the speculative concerns driving higher fuel costs will subside and likely lead to a drop in world oil prices.”

“We agree with the Administration’s perspective that it is not America’s place to pressure Ukraine’s government regarding sovereign decisions, and with the principle you have enunciated that there should be ‘nothing about Ukraine without Ukraine.’ But as legislators responsible for the expenditure of tens of billions of U.S. taxpayer dollars in military assistance in the conflict, we believe such involvement in this war also creates a responsibility for the United States to seriously explore all possible avenues, including direct engagement with Russia, to reduce harm and support Ukraine in achieving a peaceful settlement,” the Democrats add.

“In May, President Zelensky, despite deadlocked negotiations, reiterated that the war ‘will only definitively end through diplomacy,’ and had previously explained that ‘any mentally healthy person always chooses the diplomatic path, because he or she knows: even if it is difficult, it can prevent the loss of thousands, tens of thousands…and maybe even millions of lives’,” the letter states.

“In conclusion, we urge you to make vigorous diplomatic efforts in support of a negotiated settlement and ceasefire, engage in direct talks with Russia, explore prospects for a new European security arrangement acceptable to all parties that will allow for a sovereign and independent Ukraine, and, in coordination with our Ukrainian partners, seek a rapid end to the conflict and reiterate this goal as America’s chief priority,” the Democrats close.

The letter, sent to the White House on Monday and obtained by The Washington Post, “could create more pressure on Biden as he tries to sustain domestic support for the war effort, at a time when the region is heading into a potentially difficult winter and Republicans are threatening to cut aid to Ukraine if they retake Congress.”

The House Democrats’ letter is remarkable in that it restates arguments made by critics of the Biden administration’s aggressive intervention into the Russia-Ukraine War. Those critics have often been accused of being ‘patsies’ for Putin or Russia sympathizers.

Far-left groups have maintained a pressure campaign in the background, but has failed to get much media traction during the war.

“Congress must not surrender its oversight duties,” said Marcy Winograd, who co-chairs the foreign policy arm of the advocacy group Progressive Democrats of America. “The stakes are too high: more death and destruction, climate havoc, famine in the Middle East and Africa, economic ruin with rising inflation, and the risk of a nuclear war.”

Code Pink has also attempt to push the White House to come to peace terms, but to no avail.

“We were quite flabbergasted that there was not one Democrat who voted against the $40 billion bill for Ukraine, about half of which was weapons. No one from the Squad, no one from the Progressive Caucus,” said Medea Benjamin, co-founder of feminist anti-war group Code Pink.

“I hate to say this, but it’s politics,” she said. “If this were happening under Trump, we would see a lot of progressive Democrats calling for negotiations and cease-fire.”