“President” Joe Biden was given a list of commands at the G20 conference on Wednesday. 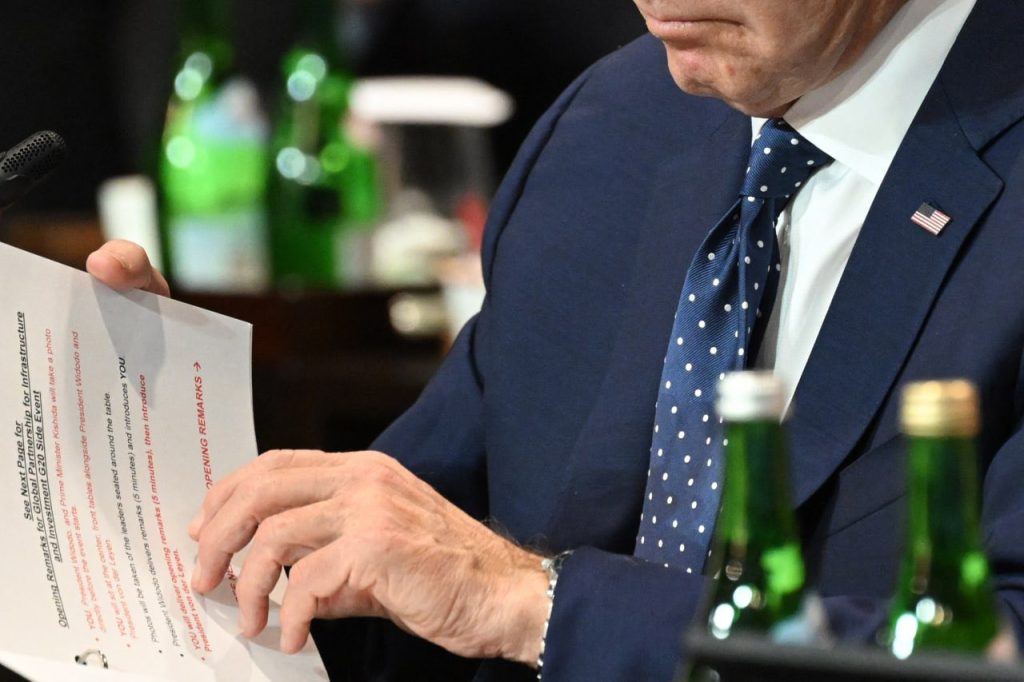 A zoom in on the list shows that it is actually a set of instructions for what to do at the conference. 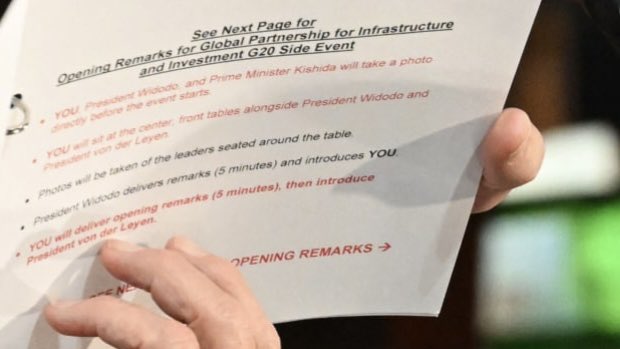 The bulletpoint instructions for the Opening Remarks for Global Partnership for Infrastructure and Investment G20 Side Event appear to have more details:

While at the G-20 conference, Biden appeared to have trouble walking up a flight of stairs:

Joe Biden admires a Russian man: "I don't care who he is. He's got some real biceps. We call them guns." pic.twitter.com/x0SA6Skr9t

While speaking with Justin Trudeau, Chinese President Xi express his concern that everything discussed yesterday “has been leaked to the papers, that’s not appropriate & that’s not the way the conversation was conducted.” pic.twitter.com/ODmA0UVLOZ

The official explanation for Biden’s last minute drop-out had many wondering once again if something was seriously wrong with the president’s health.

“Breaking news would be that President Biden is missing the G20 leaders dinner,” Fox News White House correspondent Peter Doocy reported. “He is supposed to be at a supper right now, 8:10 in the evening here in Bali, Indonesia, with everybody that flew in. If you’re the U.S. president, you spent basically two days flying to get here for a dinner like this. You got MBS there, you got Trudeau there. Xi is also there, if anything was left on the table.”

“Yesterday we did hear President Biden tell us that he had a cold and he has tested negative for Covid, despite the Cambodian leader from our last stop being positive now, but we do not know exactly what is going on with the president,” Doocy added. “They called an early lid. So we will keep you posted on what exactly is going on with Biden.”

It was also reported that Biden canceled the leaders’ dinner and headed back to his hotel.

“Biden skipped tonight’s gala dinner at the G-20 summit and returned to the hotel at 8 pm instead,” Disclose reported.

JUST IN – Biden skipped tonight's gala dinner at the G-20 summit and returned to the hotel at 8 pm instead.

Biden had taken just four questions at a press conference.

What did I just watched ? pic.twitter.com/F8Bfg14QBn

The G-20 world leaders’ dinner went off without a hitch without the American “president,” regardless. Biden had received his instructions and was doing whatever his handlers told him to do.