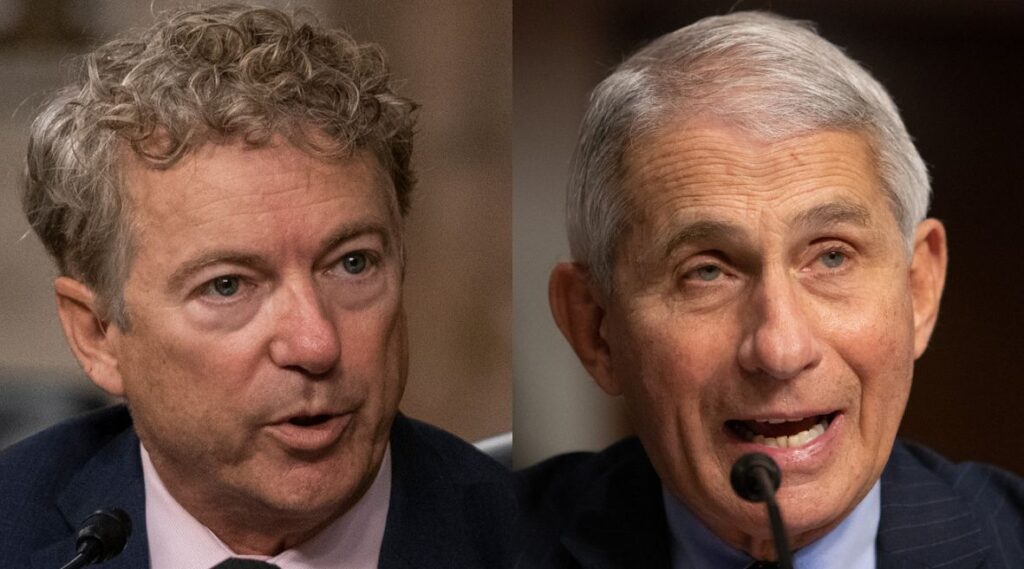 Dr. Anthony Fauci may believe that he is “the Science.” After all, who else keeps idolatric pictures and even bobbleheads of himself in his office?

But for all of Fauci’s bluster about his purported omniscience on everything viruses, there is his stubborn track record of failure. Fauci has been wrong time and time again. And Senator Rand Paul, who is a practicing ophalmologist, has been there to correct him every step of the way.

So, when Dr. Fauci had the opportunity to proselytize his boundless wisdom with the University of Michigan’s graduating class this weekend, he added in the risible rimshot argument that his critics were the ones ‘normalizing untruths.’

Senator Rand Paul joined Fox News host Jesse Watters to dissect the doctor’s claim, while peppering the NIAID Director with a barrage of established Covid facts that should put his misinformation complaints to shame.

“Anthony Fauci — I don’t know if you saw this?” Watters said. “He was invited to lecture graduates about the dangers of untruths at the University of Michigan this weekends. Listen to what he said. [Rolls clip.]

“As you graduate and take the place in the wider world that will be yours to shape, do not shrug your shoulders and accept the normalization of untruths,” Fauci said in the clip. “Because if you do, lies become dominant and reality is distorted.”

“Wouldn’t you be so jubilant tossing your cap up in the air after listening to that guy, senator?” Watters asked.

“Well, but, here’s the interesting thing, it’s the same argument as the disinformation board,” Paul responded. “We have to decide what is true and what is not true.”

“So, for example, I think that Dr. Fauci has promulgated untruths, he has normalized untruths,” Paul argued. “Number one, he says Covid treats after age the same and that the treatment should be same whether you are 10 or 80 years old. Everyone should get vaccinated 14 times,” Paul said, exaggerating for effect.

Neither vaccines nor boosters have stopped the spread or infections, and quickly wane in comparison to natural immunity.

“He has also said masks work everywhere,” Paul went on. “They don’t really work in public.”

Multiple studies have backed this assessment up; no matter how many times that mask advocates insist that they work, there is no certainty they stop the spread of airborne viruses throughout the general public.

“He has gone one step further and he says another untruth which is that booster vaccines should be given to adolescents,” Paul added. “There is now a significant amount of scientific data and studies including large, multi-million person studies, showing that you have an increased risk for inflammation of the heart the more vaccines you give young people.”

In February, a CDC panel recommended a longer waiting period in between mRNA covid shots due to a reported spike in heart inflammation cases.

“A wider gap between the first two doses of the mRNA Covid-19 vaccines could improve the shots’ effectiveness and help reduce the risk of a rare type of heart inflammation called myocarditis, experts told a Centers for Disease Control and Prevention advisory committee on Friday,” NBC reported.

In addition, the Food and Drug Administration issued new restrictions on the single-shot Johnson & Johnson Covid vaccine due to the escalated risk of blood clots.

“We combine that with the fact that 75% of young people have already been infected,” Paul continued, while giving a very low estimate. “He discounts this completely and says ‘you should never even be tested to see if you have had Covid.’ I think that would be the logical thing you would do.”

Senator Paul is likely referring to the high number of Americans who have been identified to have Covid antibodies, per a CDC study in March.

“According to a Centers for Disease Control and Prevention survey of blood donor samples, conducted in December and updated last month, an estimated 95% of Americans ages 16 and older have developed identifiable Covid antibodies,” CNBC reported “Those come from both vaccinations — roughly 77% of the U.S. population has received at least one Covid vaccine dose, according to the CDC — and prior Covid infections.”

“The biggest purveyor of untruths right now in public health is Dr. Fauci,” Paul  concluded. “So when someone says we are going to stop – they can’t even agree to what the truth is. That’s why we have a robust debate. Scientists debate. Journalists debate. Politicians debate we arrive at the truth through disputation.”

Elon Musk Plans ‘Bloodbath’ for Woke Twitter Employees After He Takes Over: Report