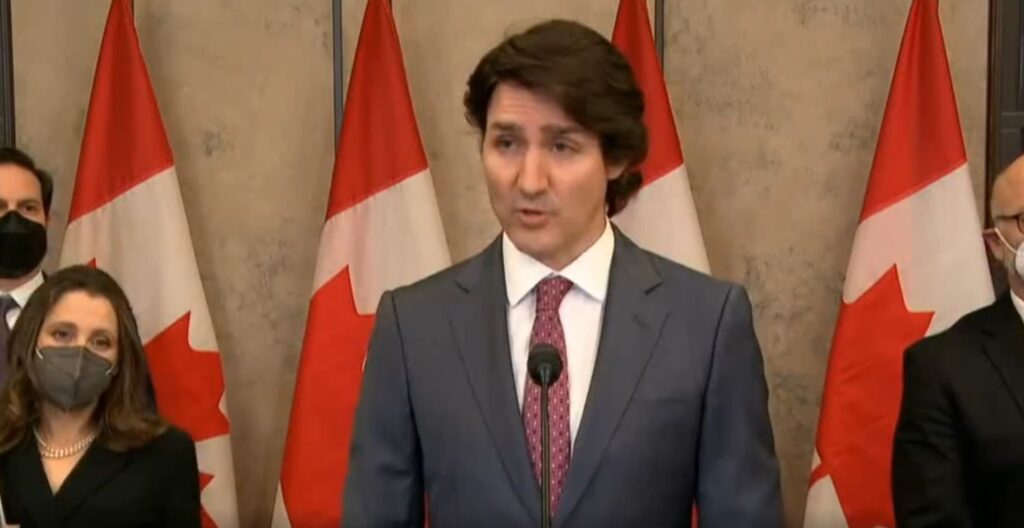 Justin Trudeau is making a declaration of “emergency” to suspend civil rights and impose an effective state of ‘martial law’ due to the Freedom Convoy protests.

The Canadian Prime Minister made the announcement on Monday.

Trudeau is invoking an executive order that was formerly called the War Measures Act. The Emergencies Act is the rebrand used during two world wars and in 1970 when militant Quebec separatists kidnapped a British diplomat.

The military is poised to intervene against the truckers, according to Canadian media reports. Trudeau’s arbitrary invocation of the Emergencies Act, rather than recognize the fundamental human rights of Canadian citizens, thus effectively suspends the Constitution, the Charter and even the International Covenant on Civil Rights.

Furthermore, Canada is going to be expanding anti-money laundering and terrorist financing rules to cover the Freedom Cover protests.

HOLY SHIT: “We are broadening the scope of Canada's anti-money laundering and terrorist financing rules so that they cover Crowd Funding Platforms and the payment service providers they use.”

However, a number of premiers have pushed back against Trudeau for invoking the Emergencies Act, rather than recognize the legitimacy of the Freedom Convoy protesters wanting their rights to be respected.

“The illegal blockades must end, but police already have sufficient tools to enforce the law and clear the blockades, as they did over the weekend in Windsor,” tweeted Saskatchewan Premier Scott Moe.

“Therefore, Saskatchewan does not support the Trudeau government invoking the Emergencies Act. If the federal government does proceed with this measure, I would hope it would only be invoked in provinces that request it, as the legislation allows,” he added.

“I am proud of Manitoba’s law enforcement officials & have full confidence in them to protect our communities. The proposal from the federal government to use the Emergencies Act is not helpful to the situation at the Emerson Border,” Manitoba Premier Heather Stefanson wrote.

“Alberta Premier Jason Kenney told reporters that he told Trudeau earlier on Monday that he would prefer if the Emergencies Act did not apply to Alberta, and that such a move was unnecessary in the province,” Fox News reported.

“Quebec Premier Francois Legault also warned that he did not want the Emergencies Act to be applied to his province, warning that he thought such a measure would be divisive,” the report added.

“It’s not time to throw fuel on the fire,” he said.

On Sunday, Canadian police have begun mass arrests of Freedom Convoy protesters who had successfully blocked the critical Ambassador Bridge for nearly a week. But now the Canadian government has a whole new problem.

The Windsor Police announced the operation to arrest the Freedom Convoy protesters on Sunday morning.

Enforcement actions continue at the demonstration area with arrests being made. Vehicles being towed. Please continue avoiding the area.

The police also announced that vehicles were being towed and that Canadians should avoid the area.

Enforcement actions continue at the demonstration area with arrests being made. Vehicles being towed. Please continue avoiding the area.

The protests were being recorded by journalists until police forcibly expelled them from the area. Sean O’Shea of Global News reported the police arrests.

Police arrested one more protester near the gas station. He wouldn’t leave. Tactical officers then told drivers in the parking lot they’d be towed if they didn’t move along. pic.twitter.com/Ypq0nRA1H9

At least two arrests. Blockade is down it appears. pic.twitter.com/d1ltYNlF7G

This man who was blocking the lane with his pick up arrested by police pic.twitter.com/rPT1k1g9u4

Tactical assault vehicles were brought in to intimidate the protesters into complying.

Windsor Police was in charge of clearing the protest. But the RCMP, from my view on the line, had a much more visible role today. For example, they brought their tactical assault vehicle to the front of the protest line to show they meant business. pic.twitter.com/SHO3zDaPFR

The police also cleared nearby protests in support of the Freedom Convoy.

We are are Tecumseh and Huron Church. Protest is cleared. Roadway still controlled by police, mostly RCMP. Their ERT TAV is here. pic.twitter.com/eu2ituxypU

Canadian veterans had earlier stepped in to slow the police clearance down.

Veterans have formed a line between the police and the truckers at the Windsor bridge. ❤ pic.twitter.com/od6xiixIqu

But the Trudeau government has a whole new problem: For every Ambassador Bridge the Canadian government clears, there will be new border crossing blockades and Freedom Convoy protests.

May I introduce you to Surrey, British Columbia, near the Washington State border. This is going to be like whack-a-mole until Trudeau submits. pic.twitter.com/gvoKCyZLah

“May I introduce you to Surrey, British Columbia, near the Washington State border,” Rebel News’ Ezra Levant tweeted. “This is going to be like whack-a-mole until Trudeau submits.”

Indeed, the Washington Post has reported that more protests and border blockades are in progress.

“The protesters continued to block parts of Canada’s capital city, Ottawa, for the third consecutive weekend and staged disruptive blockades at other border crossings in Canada,” Washington Post reported.

In Toronto, the police are actually blocking off roads to prevent Canadians from having their freedom of movement restricted by the protests.

ROAD CLOSURES: (UPDATE)
⁃ No arrests related to yesterday’s protests
⁃ Out of an abundance of caution, Hospital Row and Queen’s Park remain closed
⁃ All other roads re-opened
⁃ We continue to monitor
⁃ Any updates will be posted here
^ep2

Nonetheless, Ontario announced that it would be ending the vaccine passports on March 1st, joining four other provinces that have agreed to lift Covid measures due to the Freedom Convoy protests: Saskatchewan, Alberta, Quebec and Prince Edward Island.