Trump Thunders About Biden’s ‘Surrender’ at Massive Alabama Rally: ‘The Most Embarrassing Thing That We’ve Ever Seen’ 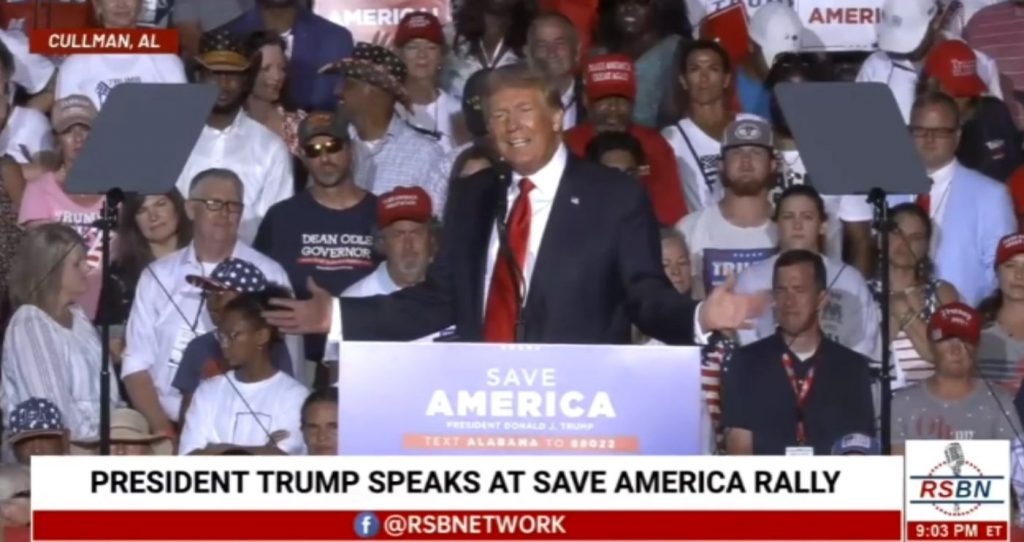 Donald Trump continued his “I told you so” tour with scathing remarks on Joe Biden’s Afghanistan “surrender” before a massive rally in Cullman, Alabama on Saturday night.

“Biden failed totally on the pandemic and he is now overseeing the greatest foreign policy humiliation in the history of the United States of America,” Trump continued. “This is the greatest humiliation I have ever seen.”

“Biden’s botched exit in Afghanistan is the most astonishing display of gross incompetence by a nation’s leader perhaps at any time that anyone has ever seen,” he added. “Name another situation like this.”

“Vietnam looks like a master class in strategy compared to Joe Biden’s catastrophe,” Trump said. “And it didn’t have to happen. All he had to do was leave the soldiers there until everything’s out. Our citizens. Our weapons. Then you bomb the hell out of the bases. We have five bases.”

“And then we say, bye bye,” Trump continued. The audience cheered loudly at the president’s proposal.

“We say bye bye,” he added. “The scene of those big, giant planes taking off with people hanging on the sides and falling off. There will never be anything like that. That’s worse than the helicopters. You remember the helicopters taking off the roofs? This blows that away. Not even a contest.”

“This will go down as one of the great military defeats of all-time,” he went on. “It did not have to happen that way.”

“This was not a withdrawal,” Trump said. “This was a total surrender.”

“A surrender for no reason,” he added. “They weren’t asking. We had them — I dealt with Abdul [Ghani Baradar]. He was their leader.”

“I said, Abdul, ‘Anything happens, we are going to rain terror upon you, it will be a terrible thing’,” Trump said.

“And you are going to continue fighting your civil war,” he went on. “I can’t do that. They’ve been fighting it for hundreds of years. That’s what they do. They fight. And they’re good fighters.”

“But I had a good relationship, other than that one statement,” he said. “After I said that, I said, ‘Now, let’s get down to business.’ We had a conditions-based agreement. And they didn’t meet the first two conditions. And we hit them hard. And then they met them. And then they had a couple of other conditions that they were ready to meet.”

“This is a disgraceful thing,” Trump added. “The most embarrassing thing that we’ve ever seen in this country. There has never been an embarrassment… and the nations of the world, both friend and foe, are looking at us and saying, ‘What the hell happened so quickly to the United States of America?’ They can’t believe it.”