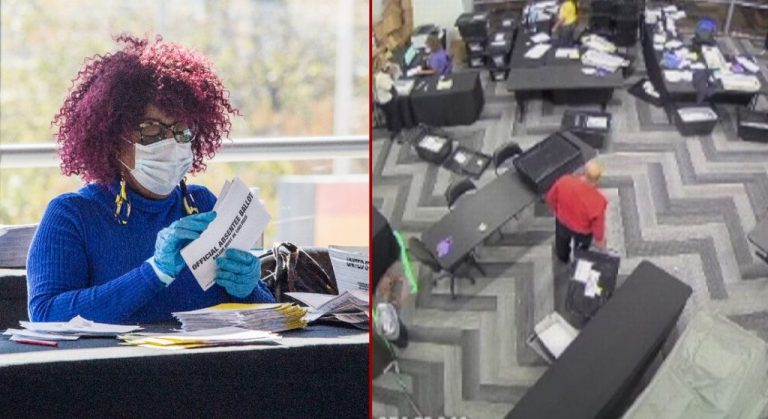 The Fulton County election case has a hearing scheduled for September 20. And it will have new respondents added to the case: Ruby Freeman, Keisha Dixon, Wandrea Moss, and Happy Faces Personnel Group. 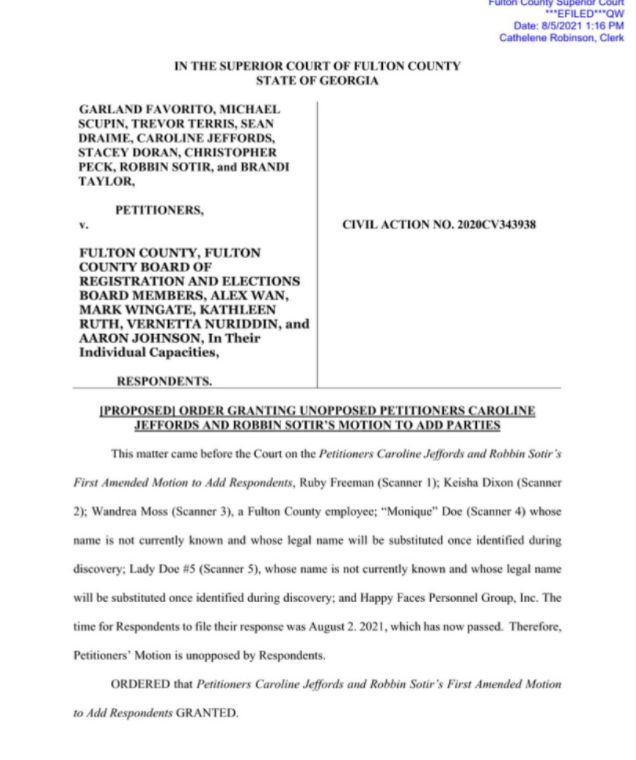 Ruby Freeman and her daughter Wandrea Shaye Moss were central to the after-hours ballot-counting operation at State Farm Arena during the 2020 election. Now, they’re finally going to face serious questioning as a part of “discovery” proceedings related to a Fulton County election lawsuit.

Freeman is notorious for being suspected of election malfeasance during the 2020 election. Among those activites were dragging out boxes of ballots from under a table after election observers were wrongfully sent home early at State Farm Arena.

Wandrea Shaye Moss also participated in dragging out boxes of ballots after she personally sent election observers home early. The video shows that the election workers ran stacks of ballots through tabulators on video, some of them multiple times.

Ruby Freeman and her daughter, who was actually her boss, will now be summoned to explain themselves before the court.

A Georgia judge in May allowed an inspection of physical ballots to resolve what litigants describe as “large discrepancies” uncovered in ballot images from the 2020 election. VoterGA.org, Garland Favorito, and another plaintiff are being allowed access to audit the phyical ballots to check if there was double counting in the 2020 election. The decision was reported as made in an ongoing hearing by Henry County, GA judge, the Honorable Brian J. Amero.

In July, Tucker Carlsonr reported on the finding that numerous ballots in Fulton County were double-counted, which would appear to match what was seen on the State Farm Arena video.

“At least 36 batches of mail-in ballots from the November election were double-counted in Fulton County, that is a total of at least 4,000 votes,” he said.

“How’s that possible? I don’t know,” he added. “Every American should want to know, because the answer gets to the heart of the integrity of our elections, otherwise known as our democracy. We’re not talking about a couple of ballots here. We are talking about a lot of ballots, at least hundreds of ballots involved. Enough potentially to affect the outcome of the election.”

Tucker then alleges that Fulton County’s deflection that the double ballots were not counted in the recounts is untrue. Tucker Carlson then discusses the “seven falsified” audit tally sheets discovered by VoterGA.

The forensic auditing team found double-counted ballots from the 2020 election and showed them in a video release.

The ballots scanned were identically marked in their entirety. The issue with double-ballot counting is that it circumstantially corroborates video-recorded evidence that appears to show Fulton County election workers running stacks of ballots through tabulators.

After the release of thousands of ballot images under a Georgia state law that has made them available to the public, the mainstream media has finally conceded that hundreds of double-scanned ballots were cast in Fulton County in the 2020 election.

“The discovery of identical ballots provides evidence to back up allegations of problems in the presidential election, but on a relatively small scale that had no bearing on the final certified count,” AJC baselessly claims. “A group of voters seeking to prove the election was fraudulent say double-counting is just the beginning of what they hope to find.”

“Double-counted ballots were discovered by voters suing Fulton in an effort to persuade a judge to allow them to conduct an in-depth inspection of 147,000 absentee ballots,” the report continued. “The judge ruled against the plaintiffs last month, but the case survived with new claims filed against the county’s five election board members.”

AJC reported it could only find 27 votes double-cast for Biden in Fulton County, but independent audit investigators claim to have found more examples of election malfeasance.

“If we’re finding this in Fulton County, we’re probably going to find it throughout the state. The question is, why did it happen?” said David Cross, who is working with the plaintiffs. “The simple fact that it happened and we found it here means that it probably occurred elsewhere.”

FULTON COUNTY, GA: 🚨🚨🚨 More evidence from @VoterGa shows audit tally sheets were marked entirely for @JoeBiden despite having votes for Donald Trump and Jo Jorgensen in those batches. Must watch! @RealAmVoice pic.twitter.com/RPOBsCON7Q

The official difference in the Georgia election statewide was a mere 12,000 votes. Fulton County went overwhelmingly for Biden: 73% of the total vote and 79% of absentee ballots. It appears now from these new findings that the the wrong president may have been certified in the state election.

“We are ‘undermining democracy’ if we ask questions about what happened, And of course that’s a perfect inversion of the truth,” he went on. “Without answers to legitimate questions like the one we just posed, and also legitimate questions, democracy dies. People begin to understand the system they’ve been told is on the level is in fact rigged and when they believe that, god knows what they do next. So let’s find out what actually happened. Let’s find out immediately. That’s find out without shame. It’s our right to know, it’s our responsibility to know.”