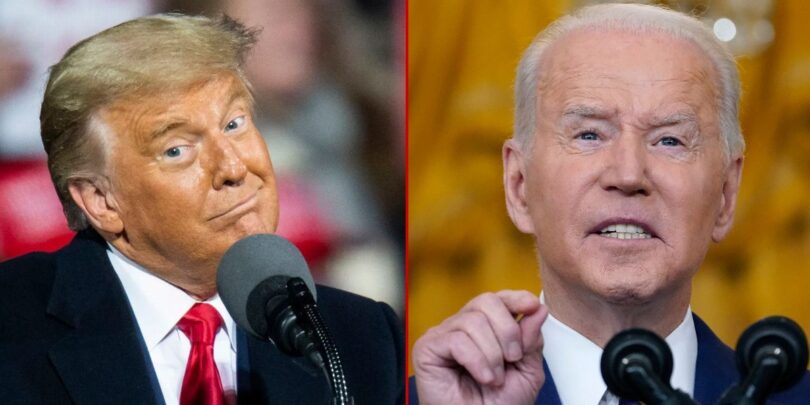 Donald Trump called into Mark Levin’s show on Wednesday to react to Biden’s disastrous press conference. The former president was asked about the “progress” Biden has made. Watch:

“Well, progress in destroying our country, yes. I think that has been tremendous,” Trump said. “He also said something that I assume was a mistake, but he said he expects Putin to go in. He said, ‘I expect him to go in,’ to go into Ukraine. And I thought that was a very unusual answer. I don’t know if he knew what he was saying because he was — he said that as part of another question and he was a little confused.”

“The whole thing was just so horrible, but you look at the border with millions of people coming in, you look at inflation, you look at no more energy independence, no, we have a much different country than we had a year ago,” he added.

The rest of the Trump interview with Mark Levin can be watched here:

“President Biden admitted yesterday, in his own very different way, that the 2020 election may very well have been a fraud, which I know it was,” he said in a statement. “I’m sure his representatives, who work so hard to make it look legit, are not happy.”

Biden had been asked at his press conference if Americans can be confident in the midterms results if the Democrats’ federal election takeover bill isn’t passed.

“Well, it all depends on whether or not we’re able to make the case to the American people that some of this is being set up to try to alter the outcome of the election,” he replied.

Jen Psaki was tasked with doing ‘clean up’ on Biden’s remarks with a Thursday morning ‘clarification.’

Donald Trump was banned from all major social media platforms for questioning the 2020 election results. The 2022 midterms haven’t even happened yet, and the current president is openly questioning them.

That’s how you know it will be a complete disaster for the Democrats.

Watch: Joe Manchin Stands Up to Democrats in Epic Floor Speech Shaming Them for Trying to Nuke Filibuster