The U.S. government has made one excuse after another for why it no longer has to provide transparency to the American people — even when it comes to federal vaccine mandates that infringe on human rights and violate citizens’ most personal decisions over their own bodies.

This week, the Food and Drug Administration was being called to account for the data used to justify its authorization of Pfizer-BioNTech’s mRNA prophylactic therapeutic being falsely advertised as a ‘vaccine.’ The plaintiffs, Public Health and Medical Professionals for Transparency, told a district court that the FDA does not intend to release the data used to authorize its authorization and used to justify federal vaccine mandates for over half a century.

“The FDA has proposed to produce 500 pages per month which, based on its calculated number of pages, would mean it would complete its production in nearly 55 years – the year 2076,” the court filing said. “Until the entire body of documents provided by Pfizer to the FDA are made available, an appropriate analysis by the independent scientists that are members of Plaintiff is not possible.”

“Would the FDA agree to review and license this product without all the documents? Of course not. These independent, world-renowned scientists should be provided the same forthwith,” the filing states.

The scope of the documents sought by Public Health and Medical Professionals for Transparency includes “more than 329,000 pages potentially responsive to Plaintiff’s FOIA request.”

The public transparency is critically important as news has surfaced that Pfizer buried the reporting of deaths in the placebo group prior to the “vaccine” authorization. Alex Berenson, who has been indefinitely suspended from Twitter, made this information available in a public Substack post.

“Further, nine vaccine recipients had died from cardiovascular events such as heart attacks or strokes, compared to six placebo recipients who died of those causes,” the report continued. “The imbalance was small but notable, considering that regulators worldwide had found that the Pfizer and Moderna mRNA vaccines were linked to heart inflammation in young men.”

The former NY Times journalist and best-selling author also pointed to a November 8 update that showed how the FDA and Pfizer misled the public. 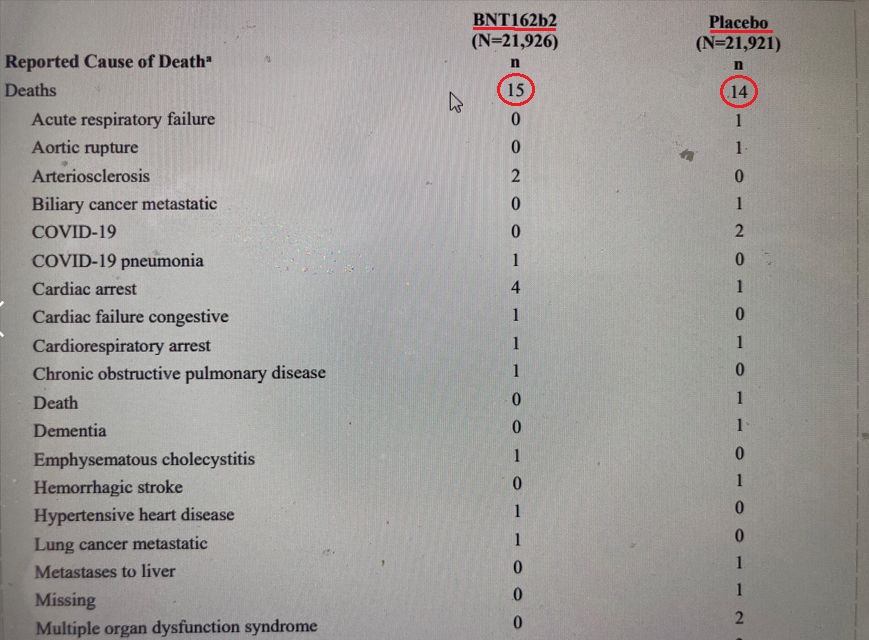 “On November 8, the agency released its ‘Summary Basis for Regulatory Action,’ a 30-page note explaining why on August 23 it granted full approval to Pfizer’s vaccine, replacing the emergency authorization from December 2020,” he goes on.

And buried on page 23 of the report is this stunning sentence: “From Dose 1 through the March 13, 2021 data cutoff date, there were a total of 38 deaths, 21 in the COMIRNATY [vaccine] group and 17 in the placebo group.” 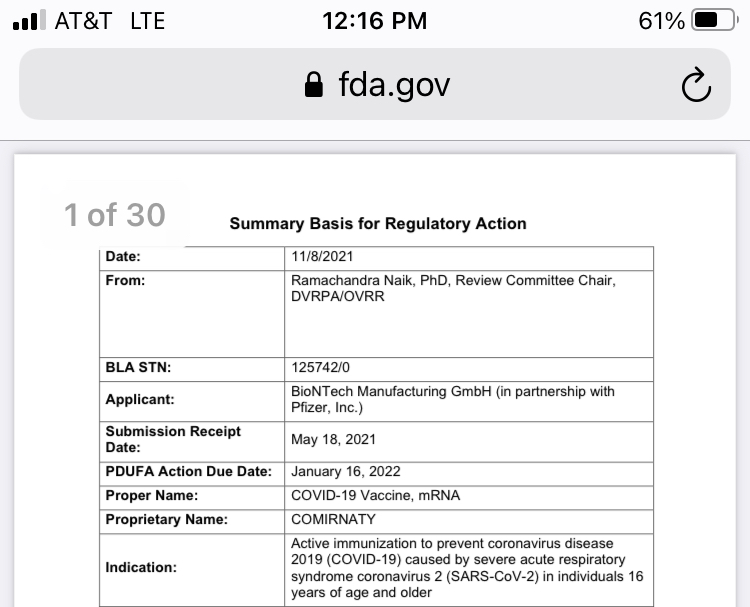 “Pfizer said publicly in July it had found 15 deaths among vaccine recipients by mid-March,” Berenson noted. “But it told the FDA there were 21 – at the same data cutoff end date, March 13.”

“21. Not 15,” he added. “The placebo figure in the trial was also wrong. Pfizer had 17 deaths among placebo recipients, not 14. Nine extra deaths overall, six among vaccine recipients.”

The journalist then proffered some explanations that vary from incompetence to outright deception.

“Could the discrepancy result from some odd data lag? Maybe, but the FDA briefing book also contains the number of Covid cases that Pfizer found in vaccine recipients in the trial,” he said. “Those figures are EXACTLY the same as those Pfizer posted publicly in July.”

“Yet the death counts were different,” he said. “Pfizer somehow miscounted – or publicly misreported, or both – the number of deaths in one of the most important clinical trials in the history of medicine.”

The abysmal track record of the FDA and Pfizer throughout the Covid-19 pandemic should call for greater demands for transparency. The court filing makes such a case.

“The acute need for transparency regarding this product is heightened by the fact that the secretary of Health and Human Services (‘HHS’), the FDA’s parent department, has granted Pfizer complete immunity from financial liability for any injury caused by its product. If injured — including suffering one of the injuries even federal health authorities admit occur from Pfizer’s product — the injured individual effectively has no recourse,” the court pointed out. “Pursuant to the declaration from the secretary of HHS, Pfizer cannot be sued by anyone receiving this product for any injury. Pfizer also cannot be sued for willful misconduct regarding this product unless HHS, which has been promoting this product, agrees to bring such a claim.”

“It should not be that the public is deprived accessing the documents and data submitted by Pfizer to license this product when at the same time the public are being mandated to receive this product with no ability to sue Pfizer for compensation if they suffer any adverse reaction,” the lawsuit added.

The FDA claims it needs more time to release the documents, because it has to redact it all. This is not serious and it is not the way the scientific process is supposed to work.

Americans are now witnessing one of the gravest miscarriages of justice in the history of their country. The nation’s courts have been largely silent and have stood idly by and watched the federal government ravage the U.S.’ constitutional order and infringe on millions of Americans’ rights.

It is high time that the federal courts force the U.S. government to obey the laws and to provide the transparency that a functional democratic republic requires. The American people cannot wait over half a century to learn the full truth about what the government is forcing them to inject into their bodies.