The 51 spies who lied to the American people about a critical news story that broke during the height of the 2020 presidential campaign refuse to apologize for their election interference.

The intelligence community’s quick dismissal of the Hunter Biden laptop story as probable ‘Russian disinformation’ was designed to shield the Biden campaign from scrutiny over the highly relevant national security vulnerability.

Despite the intelligence and law enforcement community spending four years sabotaging the Trump candidacy and presidency over a Russian collusion ‘witch hunt’ hatched by the Hillary Clinton campaign, a surveillance and investigative endeavor purportedly launched due to concerns about foreign election interference, it thus turns out America’s own ‘deep state’ apparatus was the primary offender of election interference in the United States.

The New York Post’s editorial board fired back at the mainstream media’s smears using the IC’s community’s “disinformation.”

“Big Tech, former government officials, and the media conspired together to bury a story,” the editorial board said. “No, not just bury — create a false narrative that flipped the script to make Joe Biden the victim of a conspiracy. In short, they peddled online disinformation to sway an election.”

“Do the officials who tried to flip the 2020 election feel any regret for their actions?” the board continued. “The Post reached out to those who signed the letter. Most would not answer the question. A few doubled-down, including Clapper. No remorse. No shame. And no apologies.”

The list of former and current IC community officials who refuse to recant for the obvious disinformation campaign is impressive. It counts among its ranks some of the most influential and prominent senior intelligence officials, who have spent an inordinate and inappropriate amount of time on national airwaves opinionating and speculating on U.S. affairs.

The U.S. news media uncritically repeated the CIA, DNI, and NSA narrative on the Hunter Biden laptop story, despite there being credible evidence that the laptop could be authentic.

In mid-October, then Director of National Intelligence John Ratcliffe said “there is no intelligence that supports” that the Hunter Biden laptop and emails were “part of a Russian disinformation campaign.”

A letter sent from the FBI responding to Sen. Ron Johnson (R-WI) argued that “the Office of the Director of National Intelligence has advised the American public that, in advance of the 2020 election, a number of nation-states plan to use covert and overt influence measures in an attempt to sway voter preferences and perspectives, sow discord in the United States, and undermine the confidence of Americans in our democratic process.”

Although the IC community’s letter had an obvious political impact on the 2020 election, the FBI refused to produce any evidence that the laptop report was inauthentic or was part of a foreign-based influence operation.

Trump’s attorney general Bill Barr was confronted by Jesse Watters on the Department of Justice’s seeming lack of pushback against the intelligence community’s false claims.

“Did you just hear the conversation about the laptop from hell?” Watters asked.

“When this was all going down in the fall, did you see what the left was doing with this disinformation campaign?” Watters continued. “Did you come out and say anything about that?”

“Absolutely,” he said. “As soon as this letter came out from these so-called intelligence specialists, the DNI, John Ratcliffe at the time, and the FBI, which worked for me, both came out and said this was not the result of disinformation, Russian disinformation. The media ignored that completely. Just kept on going with the disinformation line.”

“That’s pretty egregious,” Watters said. “Would you say that there was a conspiracy between Big Tech, former intelligence officials, the media, the Democrats to, I don’t know, let’s just use the word ‘rig’ an election?”

“Yes,” he responded. “That definitely made an impact on the election, suppressing that news. And it’s not a question of whether it was criminal or not. Just the facts alone were shameful and most Americans would immediately see what was going on and how repulsive it was and it would have had an effect. The issue of criminality is a different issue.”

Behind closed doors, however, Barr was ripping Trump for turning the Hunter Biden laptop into a campaign issue, according to his own book’s account.

“You know this stuff from Hunter Biden’s laptop?” Trump asked him, according to Barr.

“Mr. President, I can’t talk about that, and I am not going to,” Barr said he ‘sharply’ replied.

The attorney general added that the president disliked his tone and asked him to consider if it was one of his own five children instead of Biden’s son.

“You know, if that was one of my kids– ” Trump objected, according to the book.

“Dammit, Mr. President, I am not going to talk to you about Hunter Biden. Period!” Barr roared.

Only days before the U.S. election, now-president Joe Biden charged that the allegations about Hunter Biden’s laptop contained incriminating evidence of his illicit business ties to China and Ukraine were nothing but a ‘classic Trump’ smear.

“So what about the Americans who really today only want me to ask you about Hunter Biden’s laptop?” KCRG Anchor Beth Malicki asked him in late October 2020.

“We are four days left and all of a sudden there’s a laptop,” he addeed. “And you may recall, there’s also talk about four months before there was a similar thing that somebody had allegedly. There’s overwhelming evidence that — from the intelligence community — that the Russians are engaged.”

The Democrat-controlled media repeatedly lied about the Hunter Biden laptop being a Trump campaign ‘smear’ and part of a ‘Russian disinformation’ campaign, based in large part on the IC community’s letter. Watch:

Meanwhile, the New York Post, the primary news agency that initially thrust the Hunter Biden laptop story into the national limelight, and was subsequently censored for it, has been vindicated.

The stark disparity between the media’s handling of the Hunter Biden laptop story and the Trump collusion hoax, itself based in large part on Russian disinformation, was a double standard imposed for none other than political reasons.

The full list of former and current IC community members who interfered in the 2020 election by sowing ‘disinformation’ is listed below. 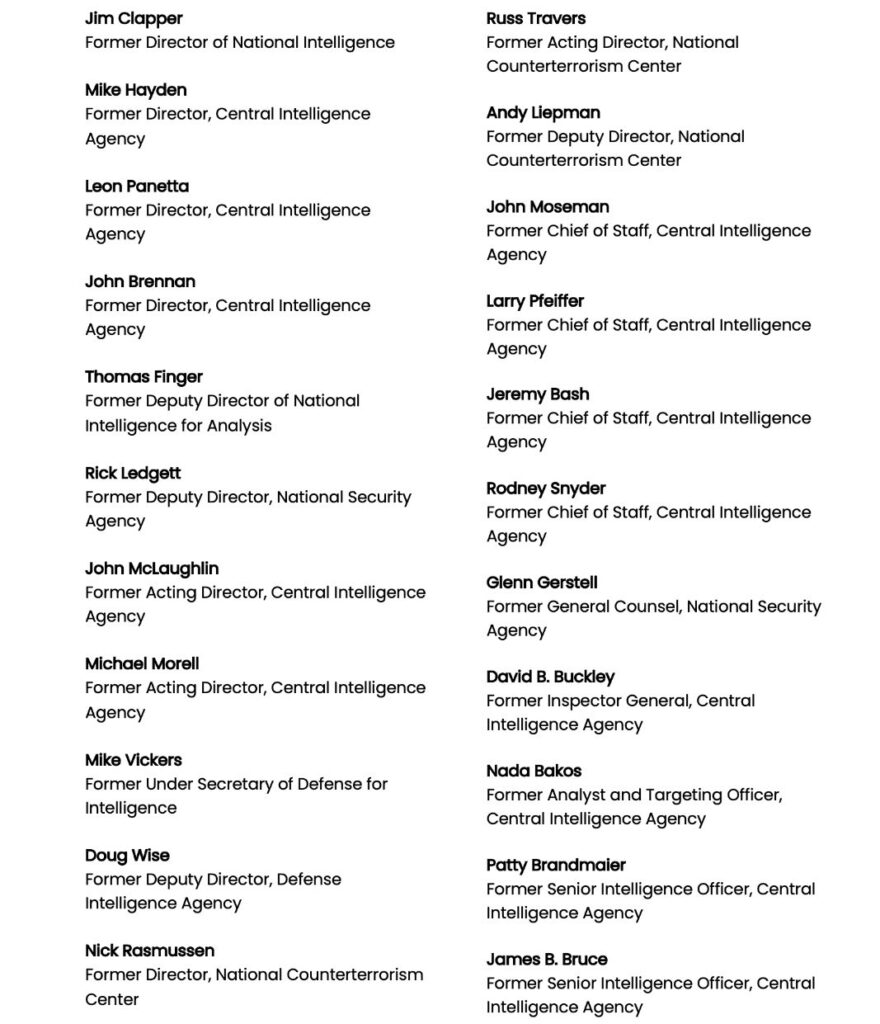 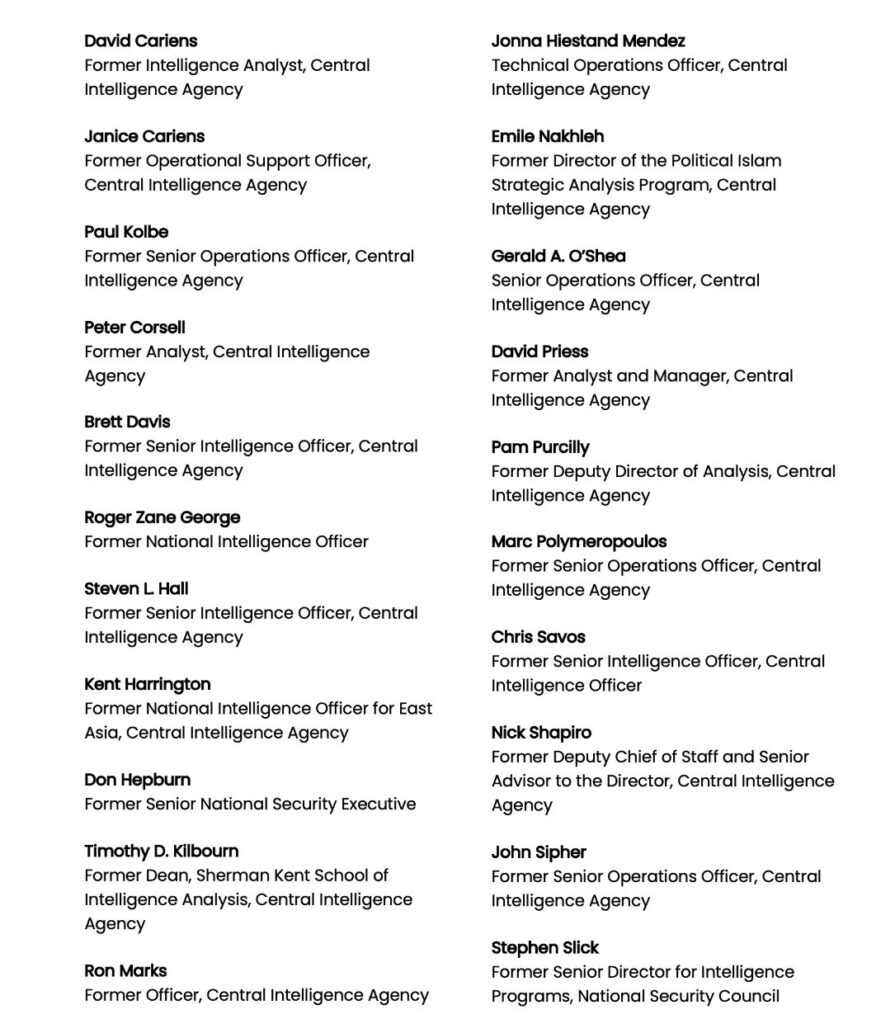